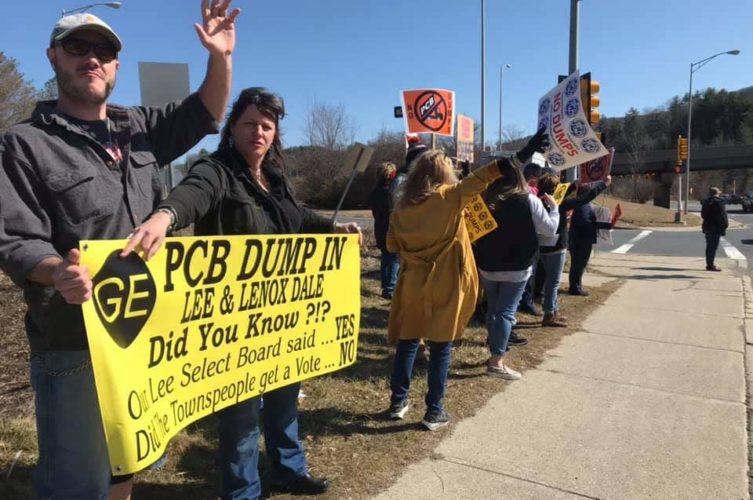 Great Barrington — Opponents of the recent settlement between General Electric and the U.S Environmental Protection Agency to clean up the Housatonic River scored a minor victory Monday night in Great Barrington.

By a vote of 3-0, with one abstention, the selectboard voted to direct town manager Mark Pruhenski to draft a warrant item for the annual town meeting Monday, May 4, asking that the town withdraw from the settlement. Though it would be voted on by all citizens at the meeting, the resolution would be nonbinding and advisory in nature.

Vice Chair Ed Abrahams, who chaired the meeting in the absence of the vacationing Steve Bannon, explained that the deadline for placing items on the warrant via citizens petition was Jan. 31, but the settlement was announced Feb. 10.

The only way for the item calling for withdrawal to be placed on the warrant is for the selectmen to put it there, even though they were the ones who signed the settlement on behalf of the town in the first place. Pruhenski will work with Great Barrington activist Maia Conty, who was in the audience, to come up with acceptable language.

See video below of the Great Barrington Selectboard discussing the motion at its March 9 meeting:

Conty thanked the board and said later on the No PCB Dumps Action Group Facebook page that she was elated: 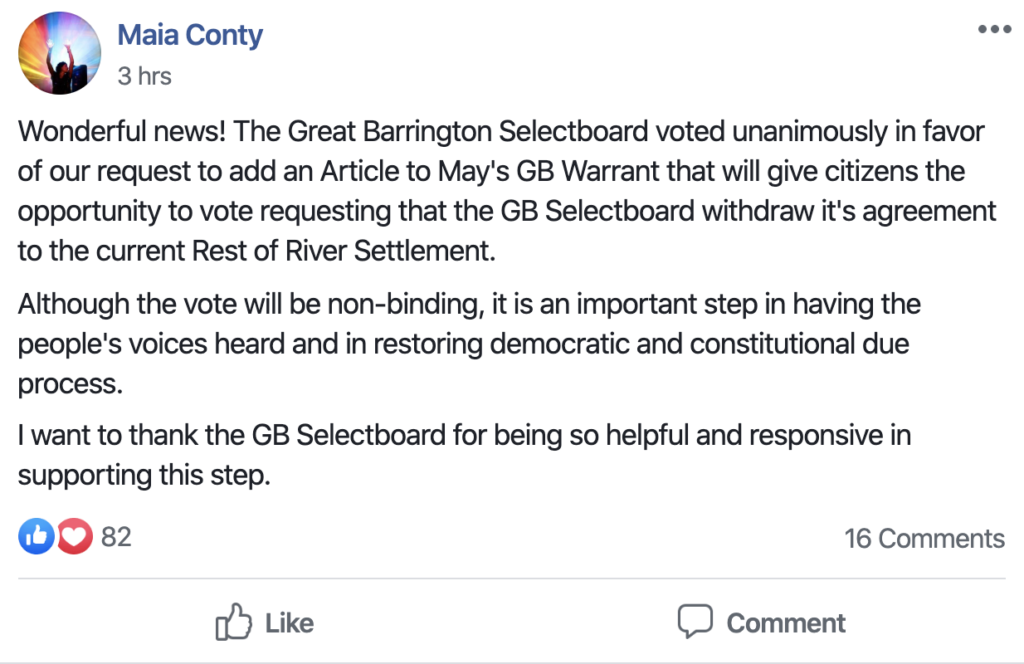 The settlement between GE, the EPA and the five towns known collectively as the Rest of River Municipal Committee has sparked considerable anger and consternation from activists opposed to the plan, which includes a lower-level PCB dump in Lee and millions of dollars in compensation for the towns from GE. Click here and here to read recent letters to the editor of The Edge objecting to the settlement.

Click here to read a recent analysis of the settlement by Edge contributor Mary Douglas, an environmental lawyer who has worked at the EPA.

The Housatonic River Initiative and the other parties to the settlement have held a series of meetings in the wake of the recently announced agreement between GE, the EPA and the towns to remove polychlorinated biphenyls, which GE dumped legally into the Housatonic from its sprawling Pittsfield plant until the practice was banned in 1979. Click here to read an Edge story about a March 3 HRI meeting in Lenox, including video of the event.

The worst of the contaminants (more than 50 parts per million of PCBs) will be shipped to a federally licensed out-of-state disposal site. The lower-level contaminants — some 80 to 90 percent of the material — will be deposited in what the EPA has called a lined “state-of-the-art” landfill in Lee, known as the Upland Disposal Facility, adjacent to the Lane Gravel Pit property off Woodland Road at the Lee-Lenox town line.

Activists at some of the meetings have insisted the settlement should have been subject to a vote by citizens of the towns before the agreement was entered into. Furthermore, the meetings among individual town selectboards in the Rest of River Municipal Committee leading up to the settlement were held behind closed doors.

That has led to some complaints that the selectboards violated state open meeting laws. The Great Barrington Selectboard addressed two of those complaints last night, one from Park Street resident Jean Louis and another from Summer Street resident Holly Hardman. Click here to read them, along with the town’s responses.

In its response, the selectboard dismissed both complaints, insisting that the meetings were properly posted, that the board was within its authority “to settle legal matters related to Rest of River” and that the discussion of matters directly related to ongoing litigation were clearly exempt from state open meeting laws.

HRI director Tim Gray told The Edge there are other movements to file open meeting law complaints and place items on town meeting warrants calling on those towns to withdraw from the agreement. He is aware of efforts in both Lee and Lenox, which will be greatly affected by the Upland Disposal Facility.

“There is an effort to do that, yes,” Gray said in a brief interview, adding that the selectmen from the five towns had “all sort of caved in. We’re trying to be optimistic and that maybe people will come to their senses.”

But Tom Wickham, who chairs the Lee Board of Selectmen, told The Edge he is not aware of any effort to place an item on the town meeting warrant calling for the town of Lee to withdraw from the agreement.

Wickham described his vote for the agreement as “one of the most difficult decisions I’ve ever had to make.”

“It’s a tough deal for Lee because we still ended up with a low-level facility,” Wickham added. “But it’s much better in a plastic bag than in a moving river. As a pragmatic person, I think this is the best deal for everyone.”

Great Barrington Selectboard member Leigh Davis has recused herself from any involvement in settlement between GE, the EPA and the towns. She told The Edge that she had consulted with lawyers in the state attorney general’s office who told her she should abstain from any involvement in the matter because she is director of development for the Eagle Mill Redevelopment project in Lee. According to the settlement, GE will remove contaminated sediments behind the remnants of the Eagle Mill Dam and remove the remnants of the defunct dam.

“Upon my election to the Great Barrington Selectboard [in 2018], it was suggested to me by a member of the Rest of the River Municipal Committee that I should seek advice from the State Ethics Commission on whether I should abstain from taking part in any of the discussions due to my employment by Eagle Mill Redevelopment,” Davis told The Edge. “Without knowing the particulars at that time I was advised to abstain completely; therefore I did not take part in any of the discussions.”

Abrahams said he expects a draft of the warrant item will be available and ready to vote on by the selectboard’s Monday, March 23, meeting.