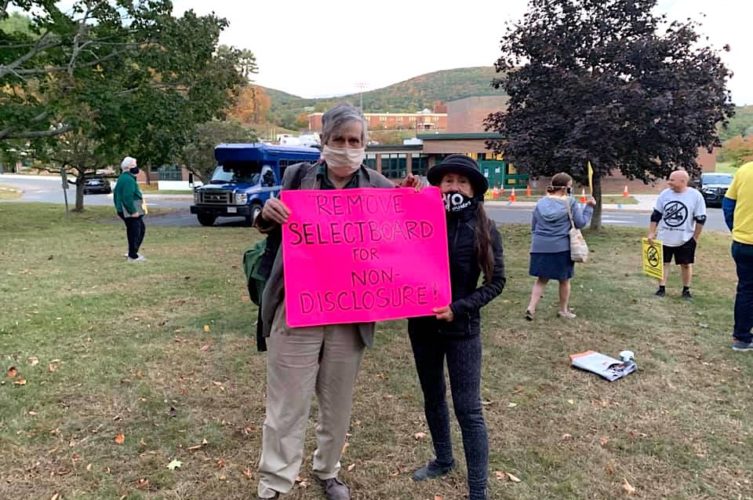 Lee — A movement to recall members of the Lee Board of Selectmen over a toxic dump they agreed to host on behalf of the town seems to have fizzled right out of the gate. But the legal fight to challenge the agreement signed by five towns with General Electric and the Environmental Protection Agency continues undaunted.

Tim Gray, who heads the Housatonic River Initiative (HRI), a grass-roots organization fighting for the health of the river after decades of environmental abuse, told The Edge that, about a week ago, he was conducting some routine research for HRI when he stumbled upon a state legal page on recall elections.

Cindy Mathias, a member of the No PCB Dumps: Action Group Facebook page to which Gray was referring, posted the same link, as well as a link to the Stoughton town charter section on recall elections. Other members responded with posts and comments — some positive, others not so much. Mathias did not respond to a message seeking comment.

Anne Langlais, another administrator of the group, told The Edge that, “Our group is not interested in seeking a recall vote to unseat our selectboard.”

“We talked about it a little bit but we just decided that, right at this point in time, it doesn’t make sense for us to even do it,” Gray added.

Andrea Wadsworth, a current school committee member who ran unsuccessfully against incumbent Patricia Carlino for a seat on the selectboard in 2019, has also been an outspoken opponent of the board’s decision to sign onto the five-town agreement to locate the PCB dump in Lee. Carlino did not respond to a message seeking comment.

“I think, in an already contentious time in our town, it just adds another level of discord that I don’t think any of us really need,” Wadsworth said of a potential recall in an interview. “We’re already so torn up as a town.”

Wadsworth said the best way to change the board is through regular elections. Board chair David Consolati is up for reelection this spring, but has not yet said if he’s running to keep his seat. There were calls for his resignation in the chat feature during a Jan. 26 Zoom meeting of the Board of Selectmen.

Recall elections are permitted and do occur in Massachusetts. Ballotpedia has assembled a handy list of all the recall elections in the state since 2009. A citizen petition for a recall election must be presented and passed at town meeting. Then the town charter must be changed and the revisions approved by the state legislature in Boston.

Most recently in Berkshire County, voters opted in 2015 to remove Hinsdale Selectboard chair Bonnie Conner after the board fired police chief Nancy Daniels, who alleged that Conner had a vendetta against her.

Wadsworth added that she would like to see the board make an honest statement and acknowledge the will of Lee voters against the dump, and that the board erred in signing the agreement in light of new information that has surfaced.

“If I was sitting in a mediation in executive session on a dump for the town of Lee, I would never have agreed to that,” Wadsworth said. “I really believe that if Lee took a stand, other towns will follow. I’m willing to guess other officials in the towns are second guessing what’s happening here.”

“It looks like we’re just going to go ahead with what we’ve got in the fireplace right now,” added Gray. The hottest iron currently in the fire for the HRI is a legal challenge to the agreement reached between the five-town committee, General Electric, and the EPA.

At issue is what to do with contaminated soil to be removed from the Housatonic River. General Electric, which had dumped carcinogenic polychlorinated biphenyls (PCBs) legally into the river from its sprawling Pittsfield plant until the practice was banned in 1979, had reached an agreement last year to clean up the river with the five towns affected by the pollution downstream from the plant: Lenox, Lee, Stockbridge, Great Barrington, and Sheffield — known collectively as the Rest of River Municipal Committee.

The settlement ultimately agreed to by the three parties was seen as a compromise but many local residents, including the HRI, were appalled that a second PCB disposal site was going to be built in Lee, in addition to the existing site at Hill 78 in Pittsfield that contains much of the contaminated sediment already dredged from the river upstream.

The agreement calls for the worst of the contaminants to be shipped to a federally licensed out-of-state disposal site. Lower-level contaminants will be deposited in what the EPA insists will be a lined “state-of-the-art” landfill in Lee, known as the Upland Disposal Facility, adjacent to the Lane Construction Company gravel pit property off Woodland Road at the Lee-Lenox town line. As part of the settlement allowing the dump in Lee, GE is obligated to pay $25 million to the town.

The decision of the Lee Board of Selectmen to sign off on the agreement to host a toxic waste dump, through its participation in the Rest of River Committee, sparked outrage on the part of hundreds of the town’s residents.

The ensuing legal battle is a two-pronged approach. The HRI is challenging the agreement with the EPA’s Environmental Appeals Board in Washington, D.C. If that bid is unsuccessful, then HRI will seek relief in the federal court system. The HRI’s environmental appeals brief is due by March 5, Gray confirmed.

The Lee Board of Selectmen met Tuesday, Jan. 26, to consider a July 5 letter from attorney Judith Knight, asserting that board members did not have the authority to enter into the agreement as part of the Rest of River Committee, a panel that had its own lawyer, without approval from town meeting.

Indeed, on Oct. 1, 2020, the Lee town meeting members voted by a clear majority to advise the board to rescind the agreement and set aside $50,000 to hire counsel to carry out the withdrawal. Wadsworth was the citizen who offered the petition as a warrant item. At roughly the same time, residents at a Lenox town meeting voted by a narrow majority to advise the Lenox selectboard to do much the same thing.

But at the Jan. 26 meeting, the selectmen stood their ground. Incumbent board chair Tom Wickham was defeated in his bid for reelection last year by newcomer Sean Regnier, who had opposed the deal. Reached by The Edge, Regnier declined to comment, but referred us to the statement he read on Jan. 26.

See video below of the Jan. 26 Lee Board of Selectmen meeting. Fast forward to 42:30 for Regnier’s statement:

In an interview, Knight, who represents the No PCB Dumps activists, said she is still gathering evidence for a lawsuit to be filed in Superior Court. In addition to its contention that the selectmen did not have the authority to sign off on the agreement without going to town meeting, the group says it has also filed complaints alleging, among other things, that the Rest of River Municipal Committee violated the state’s Open Meeting law by negotiating the pact in executive session and not making available minutes of those closed-door sessions.

Archived minutes of the meetings are available on the Rest of River Municipal Committee section of the Berkshire Regional Planning Commission’s website, but do not include descriptions of the executive sessions. Knight has not yet received a response from the office of the state attorney general, which adjudicates Open Meeting law complaints.

“This isn’t the kind of thing we can allow our selectboard to do and it is really pretty outrageous — to agree to a PCB dump and not tell the citizens before signing off on that,” Knight said. “They just don’t have the authority.”

Lee town counsel Jeremia Pollard, who did not respond to a message seeking comment, has said previously that the selectboard acted within its authority in negotiating the agreement as part of the five-town panel. He cited Chapter 43 Section 2 of the town bylaws, which address “settlement of claims.”