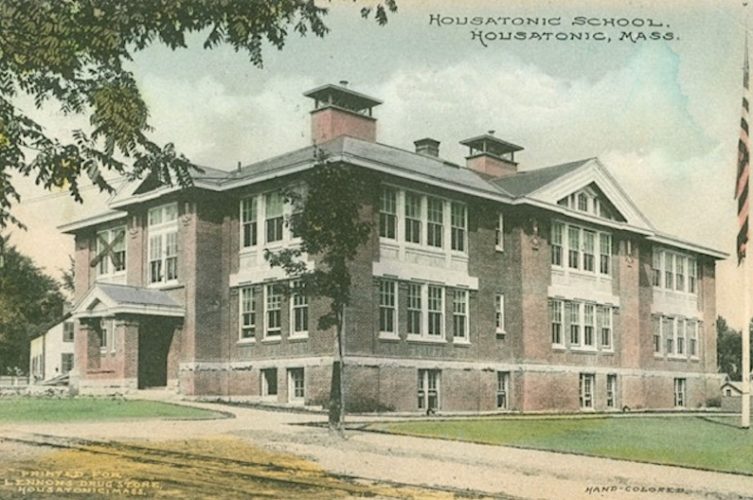 A historic representation of the Housatonic Elementary School, as depicted in a colorized postcard, printed for Lennons Drug Store in Housatonic.

GREAT BARRINGTON — A request for proposals (RFP) recently drafted by Town Planner Chris Rembold for the reuse of the decrepit Housatonic School will undergo some revisions before being advertised later this year.

Since the Berkshire Hills Regional School District closed the school 15 years ago, the town has tried and failed at least twice to market the building to potential developers, but received no viable proposals. At Monday night’s selectboard meeting, the board seemed more determined than ever to succeed in what chairman Steve Bannon called “our last shot at this.”

See video below of Monday’s Great Barrington Selectboard meeting. Fast forward to 1:03:12 for the discussion on the Housatonic School:

If no workable proposals are received for the 116-year-old building, demolition might be in the offing, though no one wanted to contemplate that on Monday night. Selectboard member Ed Abrahams said demolition would cost in the neighborhood of $1 million.

“I think right now demolition is still a four-letter word,” Bannon said. “I’d like to think that’s not a consideration yet.”

Before diving into the details, Rembold walked the board through an executive summary he had prepared after receiving a report on the building last month from the Housatonic Improvement Committee, which recommended a mixed-use approach for the building after an exhaustive process involving an architectural charette. The estimated price tag could be as high as $7 million.

Rembold said the draft RFP took into account the recommendations of the committee. Click here to read the document, which will be revised slightly to reflect Monday’s discussion.

The building sits on only .65 acre and the structure itself covers 35 percent of the parcel. The school abuts the Housy Dome, the gymnasium annex of the former school that is currently used as a popular community center for the village of Housatonic.

The Housy Dome also contains about 15 parking spots that were previously said to be unusable for the new developer of the Housatonic School and its tenants. Without Housy Dome parking, the school building itself has only a handful of spaces, far fewer than would be necessary for most uses. And there is no sentiment in town for reclaiming a portion of the village playground next to the school for additional parking.

But Rembold said Monday that if a developer determines that additional off-street parking is needed, six to eight spaces could be shared with the community center. In addition, the slope at the rear of the school building could be filled in to create another six to eight spaces. The town has also conducted preliminary site engineering showing the possibilities and costs of creating additional parking.

The organization submitting the successful proposal must also deal effectively with hazardous material in the building. The town completed a Phase 1 environmental site assessment in 2012 which found a relatively new 5,000-gallon oil tank with no contamination around it.

However, a hazardous building materials inspection performed two years ago revealed the presence of asbestos in the asphalt roof shingles, floor tiles, glazing, glues and insulation. Also noted was the presence of lead paints “and various other hazardous materials” in lighting, lamp ballasts, switches, and the like.

But there could be a financial enticement for a would-be developer. In 2019, town meeting approved [see page 51] $650,000 for “Housatonic School improvements,” including a new roof and windows.

“These funds have not been spent, but rather are available to be spent at such time as benefits the completion of the project,” The RFP says.

Rembold’s draft RFP also says the town would be open to tax incentives for a qualified developer, including Tax Increment Financing, a special tax assessment designation that could lower property tax liabilities in exchange for job creation, and the waiving of various permitting fees.

In 2013, the Community Development Corporation of South Berkshire (CDCSB) proposed a mixed-use development that included 11 units of affordable housing, and commercial space including an area for nonprofits and even a satellite office for police. But then-Town Manager Kevin O’Donnell put the kibosh on the proposal after strong community opposition.

More recently, in 2019, the town pulled the plug on a proposal by Grayhouse Partners to redevelop the building through a public-private partnership. The proposal called for a mixed use of the building that included so-called business incubator spaces, and collaborative workspaces for technology and business. The proposal, which would have left the town the owner of the school, struggled to find adequate funding.

Bannon said the decision about which proposal, if any, to accept this time around would be up to the selectboard, though he would be open to holding another public meeting to collect more input if town residents felt the need for it. Potential developers will have 90 days to respond after the RFP is published in a newspaper.

Selectboard member Leigh Davis suggested a more aggressive and creative marketing effort be made in the RFP before it is advertised. The RFP is on the agenda for the board’s next meeting on Tuesday, Jan. 18.