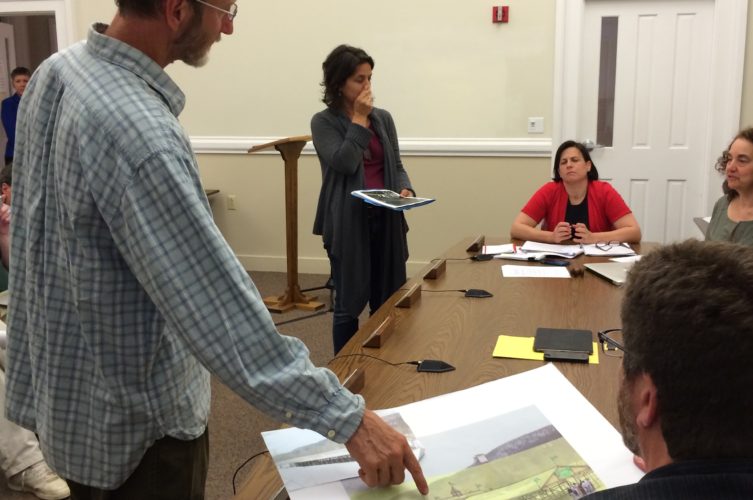 Great Barrington — After months of regulatory hassle, the Great Barrington Fair Ground (GBFG) Community Redevelopment project got the green light to apply for building permits to make alterations and improvements to the 57-acre site. At a special meeting Tuesday (July 1) evening, the Selectboard unanimously approved special permits for the site to be designated a community center and to begin repairs and upgrades to the former fairgrounds.

The permit, however, came with a condition. Because the fairgrounds is located on a floodplain and a floodway, the town must receive a letter from a certified engineer that the proposed improvements will be suitable and safe. Such certification is required by floodplain regulations. At a meeting to consider the permit two weeks ago, the board, upon advice from counsel, had declined to approve it until GBFG had supplied the report.

Nevertheless, the board granted the permit this week even though the engineer’s letter is not yet in the hands of town officials, but with the stipulation that it will be before any work begins. The wetland area requires evaluation and documentation since Federal Emergency Management Agency (FEMA) and town regulations are most stringent regarding the “Regulatory Floodway,” an area in which water levels could rise too high if the river and adjacent land is altered in a way that might affect water flow.

The special permit was granted only for currently proposed projects on the 57-acre tract, which includes renovation of the old cowshed and grandstand, a new gazebo and dog park.

Town Manager Jennifer Tabakin noted that any future applications for improvements must also go through the complete round of permitting processes, and that anything proposed within the floodway will again require analysis by a certified engineer, as well as approval by all other regulatory agencies.

The Selectboard determined that the degree of improvements proposed in the floodway is minimal, and a consultation by an engineer assured them that it was reasonable to allow such use on the site.

Tabakin said that the fairgrounds, purchased by Bart and Janet Elsbach in 2012, and sold to the nonprofit Great Barrington Fair Ground (GBFG), were “going in the right direction in making more permeable places where the water could flow.”

“We can’t allow detrimental impact [in a floodplain],” observed Selectboard Chair Deb Phillips, who later said she felt “comfortable” that there wouldn’t be.

As a result, GBFG appears ready to launch into their envisioned mission. The Board of Health has already approved all sewage and drainage systems. Traffic and public safety issues have been discussed, and it was agreed that the Town would work with the Fairgrounds for traffic control. Phillips added that there should be a “regular review and monitoring” of traffic, since events will vary by type and time of day.

But in order to move forward with its plans and secure funding for them, GBFG requires the permits to be in place – including hiring the certified engineer — for work that will enhance what is already a community gathering spot on Saturdays during the Farmer’s Market, and which continues to hold community cleanup events. As a special feature this summer, the Fairgrounds will host Circus Smirkus for four performances in July [see the Berkshire Edge calendar for details].

“It is a general blessing to proceed,” said Janet Elsbach, of last night’s approval, noting happily that the situation has evolved into “a constructive partnership” between the organization and the town, a sign, perhaps, of abundant eagerness from all quarters to see a rejuvenated Fairground.