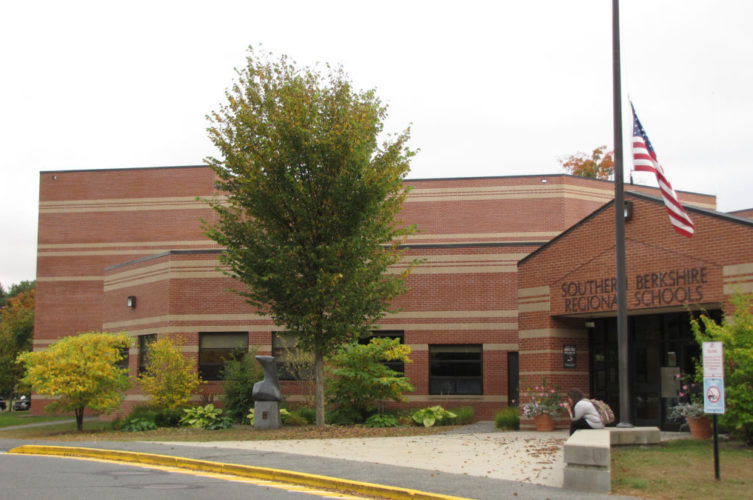 The entrance to Mount Everett Regional School in Sheffield.

The complaint comes in the form of a letter to the full school committee from Brenda Olivieri, a staff member and academic case manager who has been employed in the district for 14 years.

The Edge learned of the grievance as a meeting of the school committee’s executive evaluation committee scheduled for Oct. 16 to discuss “progress on the superintendent’s goals” was canceled without explanation. It has since been rescheduled to Thursday, Oct. 24, at 5 p.m. as an executive session, in part “to conduct strategy sessions in preparation for negotiations with nonunion personnel.”

In a one-page letter to the school committee, Olivieri echoed the concerns of former dean of students Kurt DeGrenier, who earlier this month, filed a lawsuit and whistleblower complaint against Regulbuto, Hubbard and the school committee for workplace retaliation and breach of contract after DeGrenier had drafted an earlier complaint that his son, a student in the district, was not receiving the services he was entitled to as set forth in the boy’s individualized education program.

In her letter, Olivieri said she has witnessed “many students” who are not receiving the services they are entitled to under the law and she saw “inappropriate conduct that has interfered with the ability of IEP students to learn under their IEPs.” As an example of that conduct, Olivieri said she saw IEP students “belittled on a regular basis” and called “retarded” by teachers.

Furthermore, she saw general education students being “allowed into the resource room, which stopped IEP students from getting the individual attention required by the IEPs.”

Olivieri insists nothing was done about those situations after she reported them March 6, 2018, and April 30, 2018, in writing to administrators. Olivieri was, however, “demoted from 7th grade to 6th grade with the promise that I would return to 7th grade this year,” the letter said. But when she returned in late August for the new school year, Olivieri said she was further demoted to pre-kindergarten.

“After I complained, I was essentially stripped of my duties and responsibilities in my job description and I was assigned to sit in a computer room to just wait and there was nothing for me to do,” Olivieri wrote. “I repeatedly asked to do meaningful work but was never allowed to do it.”

Olivieri alleges that Regulbuto has “created a culture of fear and intimidation,” resulting in retaliatory action against her “for reporting unlawful conduct.” Olivieri acknowledged fear of losing her job in airing her concerns but added, “I feel it is the right thing to do for the good of our students and the community.”

“I hope you will investigate these issues carefully, put me back in my previous 7th grade position and protect me from further retaliation,” Olivieri wrote.

Regulbuto was hired in 2017 to replace the retiring David Hastings. She is in the third and final year of her current contract.

Kevin Kinne, a Pittsfield lawyer who represents DeGrenier, told The Edge he is not representing Olivieri but said earlier this week that, “We will be looking for witnesses who have experienced similar issues with the District.”

Kinne told The Edge yesterday: “This is the tip of the iceberg. Since Mr. DeGrenier filed his Superior Court Complaint, numerous people have come forward to describe having similar experiences.

“Mr. DeGrenier and I sincerely hope that, as this new information becomes available and people have the courage to speak up, the School Committee will thoroughly investigate the matter and take prompt and effective action for the benefit of the District’s students and their families.”

The Edge reached out to Regulbuto and school committee Chair Jane Burke, who provided a lengthy statement. Click here to read it in its entirety. Burke acknowledged receiving the correspondence from Olivieri but insisted that “this matter will be discussed by the School Committee in an upcoming meeting to determine an appropriate response.”

The discussion of a personnel matter will take place behind closed doors because, as Burke emphasized, it is permitted by the state’s open meeting law. The district has come under criticism recently for a pair of violations of that law.

Burke also took issue with what she called “the continuous public attack over the past several weeks that has been aimed at the Special Education Services the District provides for our students.” The district, she said, has adopted procedures for providing educational services to all of its students consistent with both state and federal law.

“These procedures include the identification of students requiring services and training of its staff on the provision of such services,” Burke said. “The goal of the District, consistent with its obligations under state and federal law is to provide all of our students with full access to education within the least restrictive environment.”

Burke added that, “There are appeal processes in place for parents and guardians to access if they believe the District has not followed an Individualized Education Plan (IEP), or if the student has not received the services that they are entitled to receive.”

The next meeting of the Southern Berkshire Regional School Committee is scheduled for Thursday, Oct. 24, at 6 p.m. Click here to read the agenda, which includes executive sessions to deal with the open meeting law complaint from Jenny Brown and negotiations with non-union personnel.

The executive evaluation subcommittee is scheduled to meet that same day at 5 p.m. On the agenda is a discussion of the superintendent’s goals and an executive session, in part “to conduct strategy sessions in preparation for negotiations with nonunion personnel.”