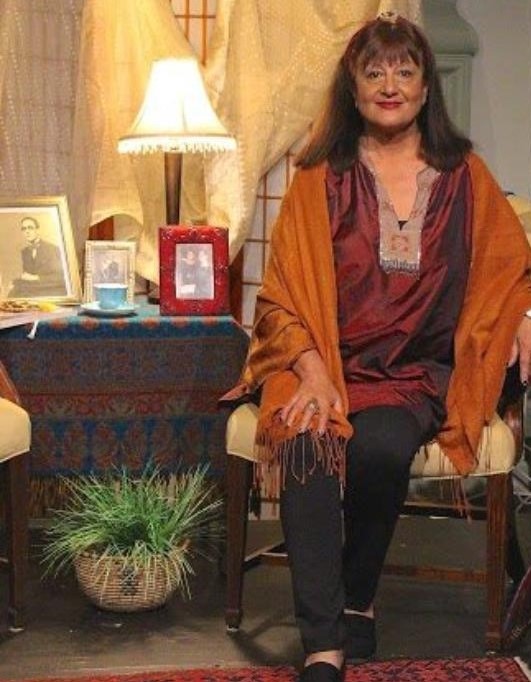 West Stockbridge — “What am I going to do to terrify myself this year?” is the wholly rhetorical question Amber Chand asked herself on New Year’s Day in 2013. While doing a one-woman show was not part of her conscious plan, the seeds of this very project sprang to life that winter when she was invited to give a talk at the Sandisfield Arts Center. “No more talks,” she told her friend Ani Crofut on the telephone before adding, “I’m going to do a one-woman show.” Chand recalls skipping about the living room like a little girl upon hanging up the telephone; and then she set to work, spending much of the next six months crafting “The Heroine’s Journey: Tales of Love, Despair, Faith and Forgiveness.” “It came right through me,” Chand recalled, both of the idea and the title, the next iteration of which she will perform Sunday afternoon at the Foundry in West Stockbridge.

“I had to go and excavate my past,” Chand told me over coffee last week. “I felt like an archaeologist,” she added, of returning to her past and unearthing the stories of the journey that brought her to where she was in that auspicious aforementioned moment at the age of 63. Amber Chand, whose name translates to “moon in the sky,” was born in Kampala, Uganda, in 1950. “My father chose my mother from a photograph,” she told me, adding that she was in India and he in Uganda. “[My mother] took the heroine’s journey by sailing across the Indian Ocean [at the age of 17], to meet and marry a man she had only met in a photograph,” Chand said of the very earliest seeds of inspiration. Her parents, both barristers (her mother was the first Indian woman lawyer in East Africa), went on to raise two sons and two daughters. By the time Amber, the oldest daughter, was 10 years old, the political situation in Uganda was growing volatile; violence was brewing, there were soldiers and kidnappers in the street, all of which forced the Chands to make a painful decision: to send their children out of the country for their safety and education.

“It was profoundly painful,” Chand shared of spending eight years “cloistered in a very privileged all-girls boarding school nestled in the English countryside.” She was the first brown-skinned student in the school’s history and entertained absurd questions from her peers at an alarming rate: “Amber, can you eat with a knife and fork? Amber, do you live in trees?” Nonetheless, she persisted — and this is where her one-woman monologue begins. “When we live through traumatic experiences, we want to bury them,” she told me. “Here, I was showing up for myself,” Chand recalled of that first performance, nearly seven years ago, in Sandisfield. “Not [as] entertainment, [rather] a storyteller showing up on stage in her vulnerability and courage.” The narrative arc of her monologue traces a series of questions she came to at the age of 18: “Am I British? Am I Indian? Am I African? Who am I?” This final question led Chand back to Uganda where she earned her undergraduate degree; just as she was preparing to depart for Cambridge to pursue her Ph.D., Idi Amin came on the radio. “It was Aug. 2 [1971],” Chand recalled. The military officer-turned-president’s message was harrowing: “I want everyone of Indian origin to leave my country in 90 days or be shot on site.”

“Searching for the Moon,” written and performed by Chand, affords the audience glimpses of her journey “into an eclectic world, across three continents, featuring African dictators, Indian holy men, Rwandan widows, boarding schools in England and more.” The themes instantly resonate on a human level and the message at the end is “deeply relevant to the challenging times we are living in.” When Chand arrived in the United States, she was a 21-year-old impoverished refugee; today, nearly four decades later, she does not regret any of it. Instead, these experiences have shaped the woman she is, one who believes “it is in witnessing each others’ stories is where the healing happens.” She has come to see her vulnerability as “an exquisite flower that is just waiting to bloom,” and calls the show “a way to release myself, to heal myself.” And, as a result, Chand now moves differently through the world and her work.

“The only way we are going to heal is for our hearts to break into a thousand pieces,” she shared with me. “In the breaking of the heart comes the most extraordinary healing.” Chand acts out the deeply painful parts of her past, with a deliberate aim to show and not simply tell. When she is terrified of Imin, and the bombs are falling, she is crawling on stage; she becomes, a lifetime later, the 10-year-old girl. “Searching for the Moon” unfolds chronologically through a series of beautiful vignettes — and there are many comedic parts, too.

“It’s always this arc … of triumph and defeat; of success and failure; of resilience and despair,” she explained. And in the end, Chand is able to see all of her life as a gift, even the challenges. “It was up to me to discover, in the midst of the shadows, how I can fully live in my life, honoring the woman I am and the journey I am on — and ultimately falling deeply in love with myself.” Chand sees all of it as a choice, as well: She could choose to live in a story that was bitter,or one that opened her up to the brilliance of the human spirit. Resoundingly, she chose the latter. Even though she experienced deep grief throughout her life, Chand never allowed herself to go through grief until her mother died. “Mother’s death, [when I was] 67, [caused] my heart [to break],” Chand told me; two weeks later, she was diagnosed with breast cancer. It was this literal energy of grief, on her heart, that led her to the next phase of her work: the realization that “grief and gratitude are the sisters on [her] journey.”

“My mother searched for the moon on the night of my birth” is the opening line of Chand’s show. “She would search for the moon’s position in the sky,” Chand explained. “On the night of my birth, there was a full moon.” The last time Chand saw her mother, it was August 2017; she was in England, celebrating her mother’s 95th birthday with cake at the seaside. On the 21st, there was a massive solar eclipse. Growing up, Chand recalls the saying “calamity is coming,” and the family would chant to protect themselves; two days later, Chand and her mother found themselves chanting the Gayatri mantra 11 times together before she departed for the airport. “Mama, look at that star,” Chand remembers saying, as she noticed the morning star in the sky. Within a week, her mother was dead. Chand continues to feel others’ profound sense of compassion, but she does not mistake it for pity. “I am not a woman feeling sorry for [myself],” she clarified. Instead, she understands that her story opens hearts and most do not have the words to adequately respond. “We don’t have the language of grief,” she explained, a sense of calm coming over her; more specifically, we live in a society where to have gratitude for life — even though it has been painful — is foreign to many. And so, Amber Chand continues to light the way for others by celebrating what it means to be alive: “Even when we are beaten down, battered, [and] diminished, the human spirit rises.”