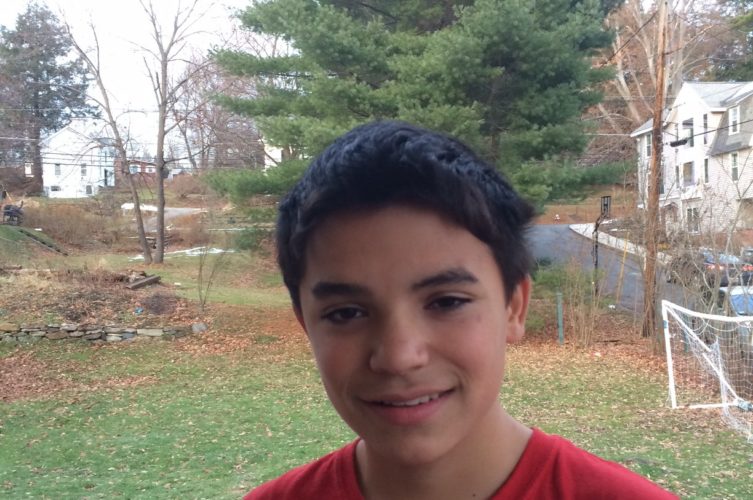 Davis was black; Palmer was white — a single mother with two children.

The Davises didn’t budge, however, and soon they had a daughter, Leigh Susan Davis. Lloyd Davis eventually left HUD to be First Vice President and Chief Operating Officer of the Martin Luther King Jr. Center for Nonviolent Social Change in Atlanta. It was that organization, founded by Coretta Scott King, that lobbied hard for the federal holiday in honor of the civil rights leader. Davis was the “principal architect” of the holiday, the LA Times reported in his obituary. He also created the federal commission to oversee the holiday, which was first observed in 1986.

Fast forward to present day Great Barrington, where Davis’s daughter Leigh now lives and works. Leigh’s 13-year-old son Sean Macken, who bears an uncanny resemblance to his late grandfather, was chosen by Monument Valley Regional Middle School and the Commonwealth to be Great Barrington’s Ambassador for Project 351 — a statewide initiative that celebrates the “ethic of service, diversity and youth leadership,” and chooses one 8th grader from every town in the state.

Stockbridge, West Stockbridge and Housatonic students were also chosen, along with Monument Valley students who hail from Otis and Sandisfield, and more on those students will be available in the coming weeks, according to school guidance counselor Kevin Costello.

Project 351 began with former Gov. Deval Patrick’s 2011 Inauguration, and has continued as a nonprofit.

Sean Macken was chosen for being a “quiet leader and unsung hero,” and for his “exemplary ethic of service, values of humility, compassion, kindness and generosity of spirit,” Leigh Davis said, listing the qualities Project 351 looks for when it goes to select its Ambassadors.

Those who knew Lloyd Davis say this was also his way in the world — he worked quietly behind the scenes on a political issue that drew massive attention with celebrity support, as Davis eventually got every state to observe the MLK federal holiday. Like her father, Leigh Davis said, Sean “is incredibly hard working, but in the background — he’s very independent. He’s willing to let other people take credit.”

Indeed, “Sean was very casual,” about his selection, and even his mother didn’t realize it was “a big deal.” Later, she wanted to post it on Facebook. Davis said Sean told her “you can’t post it on Facebook because other kids will feel bad.”

“He’s an underdog,” Davis said of Sean, who has two younger sisters. “His father isn’t here, he was born and raised in Ireland.” He struggled to adjust to his new home in New England when the family moved from Galway in 2009, she said. “And like my father he prevailed.”

Lloyd Davis had an even tougher time of it. He was put up for adoption at birth in Chicago in 1928. According to the Amistad Research Center, which has a collection of his papers, “Davis never knew or met his father and spent much of his childhood in a foster home run by gospel singer Mahalia Jackson.”

His grandson Sean has been invited to Boston on the MLK holiday in January to meet the Governor and begin his one-year term of service with Project 351. Davis said Project 351 had no idea of Sean’s connection to Dr. King and the holiday. The creation of the non-profit, it turns out, was partly inspired by Dr. King’s work.

In the spirit of Dr. King’s ethic of service to others, being an Ambassador is serious business, according to Project 351. “Ambassadors are expected to use the service and leadership skills they develop to address important issues facing their local communities,” their website says.

Sean says he needs more time to figure out where he will focus his efforts, but right off the bat he said he’d like to “work on the recreational areas, like cleaning up parks.” He said community service “helps our generation as a whole — it influences kids to be more caring.”

Project 351 also says its Ambassadors should be humble and compassionate while helping out.

Indeed, Lloyd Davis — that quiet man who persuaded not-so-humble Wall Street to celebrate the MLK holiday — would be proud. The holiday was always meant to be a day to help others, rather than a vacation — something it seems, Lloyd Davis rarely had.

When Davis took the that job in Atlanta, Leigh’s mother stayed in Washington, D.C., so as not to “uproot the kids.” Davis was holding down two jobs in two cities, Leigh said, and we “didn’t see a lot of him.” She has a memory of her father “on the phone with the President in the kitchen.” And when President Reagan signed off on the federal holiday in 1983, Lloyd Davis said “he was too busy to go” to the White House reception — too busy lobbying states to adopt the holiday, Leigh said. Instead, he sent his wife and two daughters to the party, where young Leigh goggled at Stevie Wonder.

Davis recalls trips to soup kitchens with her family on the MLK holiday. Helping people has “kind of trickled down — it’s in my bones,” Davis said. Leigh is a hospice and Construct Inc. volunteer, in addition to her work on the town Finance Committee. All in addition to her Marketing Director job at the Mahaiwe Theater.

Lloyd Davis’s former assistant and later executive director of the commission, Alan Minton, told the LA Times that Davis didn’t believe the commission should tell people what kind of service to do: “Lloyd said, trust in the human spirit that they will find creative ways to help.”

Helping seems to have trickled down to Sean, as well. Project 351, Sean said, “teaches kids responsibility and how to care for the next generation.