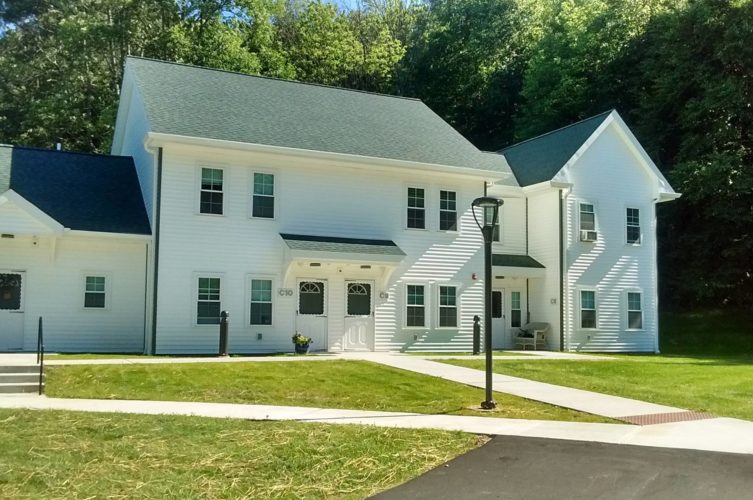 Berkshire County — Of all the victims of the COVID-19 pandemic, those who are facing eviction because of hardship or loss of income just might be the least obvious casualties. And local housing experts say numbers will surely increase if, as expected, a federal moratorium on evictions expires later this month.

Construct, based in Great Barrington, recently sent out a fundraising email, along with an embedded video by Tom Truss, to friends and supporters with the subject line “URGENT: Eviction protection ends Dec. 31.” Indeed, the combination of the end of the eviction moratorium and recent spike in COVID cases has led some to characterize the phenomenon not simply as a crisis but as an “eviction tsunami.” Compounding the likely devastation, people of color are most at risk of being left without a home.

“Rents are skyrocketing, housing options are drying up, and families who have never needed Construct are suddenly at risk of being homeless,” the email said.

Construct says single parents who were already struggling before the pandemic hit back in March struggle to even look for jobs because they are often at home watching their children, whose schools have likely reverted to remote learning.

The federal moratorium on evictions expires on Dec. 31, putting an estimated 19 million U.S. tenants at risk. The good news is that Congress is weighing the possibility of extending it as part of a $900 billion coronavirus relief package.

Gov. Charlie Baker ended the state moratorium on evictions on Oct. 17 but announced a $171 million plan to support renters and tenants. The plan added $100 million to Residential Assistance for Families in Transition (RAFT), a tenant and landlord relief program, as well as nearly $50 million for rapid response programs such as HomeBASE, a state emergency rehousing benefit.

“When the governor decided to lift the moratorium, he also put in place a number of resources where tenants could apply for RAFT funds without an eviction notice, which has been great news,” Ralph said in an interview. “It’s something we’ve been advocating for for years.”

But that federal moratorium did not stop eviction filings from rising. The Massachusetts Housing Partnership’s Center for Housing Data found that by mid-November, a month after the state moratorium had been lifted, weekly filings had returned to pre-pandemic figures, or more than over 600 per week.

Construct is in the unique position of being both a housing advocate and a landlord. When an eviction notice is served, advocates say many tenants are unaware of their rights, which includes the right to a hearing in housing court or to mediation, often through the Berkshire Regional Housing Authority.

“That’s the other real advantage of going to court is that most often the case goes to mediation and the landlord and tenant are able to sit down with a mediator in housing court,” Ralph explained. “Usually the settlement is a payment plan that has the weight of the court behind it but also is something that works for both parties.”

Ralph was quick to add that eviction is typically an action of last resort for landlords. It is typically less expensive for a landlord to deal with tenant hardship than it is to go through the legal process of eviction.

Furthermore, in the current economy, it’s an open question as to how quickly a landlord could find a paying tenant after evicting a renter who was in arrears. Ralph described the vast majority of the landlords in southern Berkshire County as “mom-and-pop landlords” who “may live in one side of a duplex and rent out the other side.”

“For the most part, these are not huge entities; they’re not big corporations,” Ralph said of South County landlords. “The largest housing providers in the southern Berkshires are the folks that do affordable housing like some of the various town housing authorities.

The research unit of the Massachusetts Trial Court tracks statistics on eviction cases. Click here to see the data through the middle of this month. So far this year, there have been 259 cases in Berkshire County. Leading the way was Suffolk County, which includes the city of Boston, at 1,712.

During that period of time, the trial court says nearly 98 percent of defendants went to housing court pro se, meaning evictees were representing themselves. Meanwhile, among plaintiffs, only 33 percent represented themselves.

Those kinds of statistics rankle the feathers of tenant advocates such as Douglas Mishkin, who called the disparity “one of the unconscionable facts of life.” Mishkin is an attorney at Heisler, Feldman & McCormick, a Springfield firm whose mission includes serving low- and moderate-income clients in cases involving tenant’s rights.

Mishkin, himself a Berkshire County resident, said sometimes landlords avoid the expensive process of eviction by telling tenants they will forgive the back rent if they agree to move out in a month or two, or perhaps even by tempting the tenant with a little money — a tactic known colloquially as “cash for keys.”

“To tenants who don’t know their rights and to tenants in general, that sometimes looks appealing, but we urge people anytime where you agree to move out, you should talk to a lawyer because you need to know your rights,” said Mishkin.

Mishkin often tells renters that there are legal resources available to low-income tenants, but he quickly added that, “The challenge in the Berkshires is matching up the people in need with the people who can be of assistance.”

Tenants should seek legal representation not only when they’re being threatened with eviction, but even when a landlord offers a cash-for-keys option, or if the tenant has to endure poor living conditions such as inadequate heat, infestations and “other conditions that may violate the sanitary code,” he said.

Asked how his firm is paid for its work, Mishkin explained that his firm does not require clients to pay in advance or provide a retainer fee. Rather, the firm is paid only when a judge orders a landlord to pay the legal fees after the trial or when a settlement is reached, in which case the firm is paid a portion of the settlement.

And there are other resources for distressed tenants. Community Legal Aid, for example, has an office in Pittsfield at 152 North Street. CLA also represents low-income tenants free of charge.

Mishkin also shared an excerpt of a presentation he made in October for the Osher Lifelong Learning Institute at Berkshire Community College. The talk, delivered via Zoom, was entitled “The Consequences of Conservative Courts.” Click here to read some of his remarks.

In the end, says Mishkin, it’s really a question of justice. Criminal defendants must be advised of their rights. It’s been the law since the 1963 Supreme Court case of Gideon v. Wainwright, in which the court ruled unanimously that the Sixth Amendment required states to provide a criminal defendant with counsel. There is no such requirement for tenants facing eviction.

“Tenants are a vulnerable group of litigants — poor, often women, disproportionately racial and ethnic minorities,” Mishkin said. “It couldn’t be clearer — tenants without lawyers get one kind of justice, tenants with lawyers get an entirely different kind.”