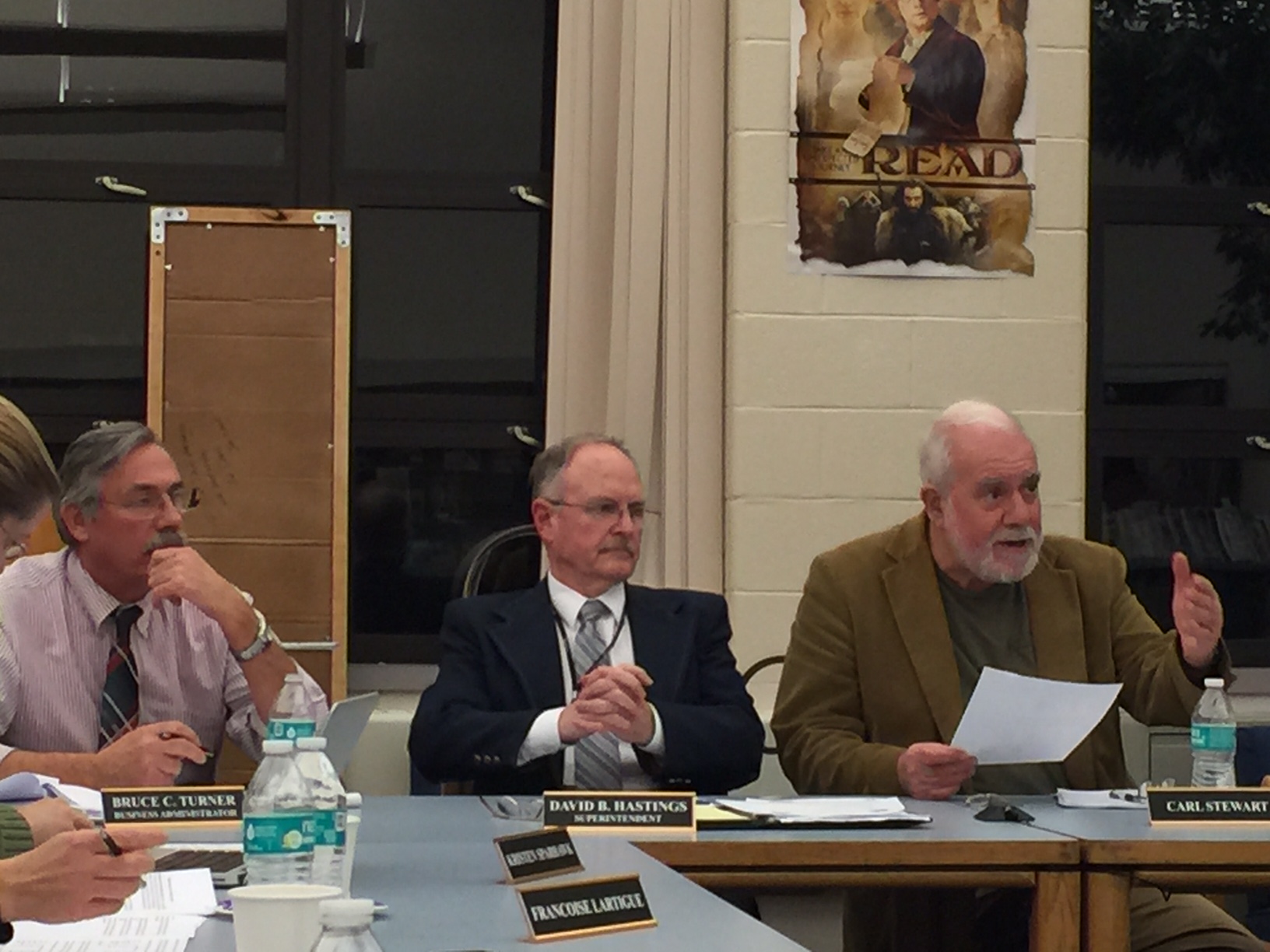 Sheffield — It was both a tragedy, and comedy, of errors.

In the latest installment of the Southern Berkshire Regional School District’s (SBRSD) five town assessment debacle, a struggling school committee voted Wednesday (December 9) to recertify the school budget every 38 days through April in keeping with a legal time period needed to keep the revised assessments intact until town meeting time. The state says that if an assessment is changed during the year, and causes a town to pay more, a special town meeting is required within 45 days or the budget reverts back to the original, in this case, with incorrect assessments.

The move to recertify periodically will prevent the Town of Sheffield, which was under-assessed this year, from having to schedule an immediate special town meeting to increase its school payment, and allows the town to wait until just before its Annual Town Meeting to vote to resolve the difference.

Following the tempestuous September 9 meeting about how to engage in a “handshake” agreement between five towns and the district, one that would rectify these remaining assessment issues, the committee and Bruce Turner, the district’s Business Administrator, agreed in a private session on a settlement for his resignation in the wake of his assessment mishap. The committee then voted in open session to approve the settlement, 8-1 with Charles Flynn abstaining. Maria Rundle was absent for that vote.

Turner is also chairman of the Town of Egremont Selectboard.

The trouble began when it was discovered that Turner used incorrect percentages to compute what each town pays in its quarterly installments to the district, numbers that go into the final budget. What was originally called a “glitch” by committee member Vito Valentini, and a “one-off mechanical error” by Stewart, was discovered by member H. Dennis Sears.

School budget cuts fixed most of the tangle, with the exception of Sheffield, which at this point still may owe the district around $90,000, according to the committee, and will require a vote at a special town meeting in the spring.

The foul-up set off a political debacle, and town officials were so daunted they called Rep. William “Smitty” Pignatelli (D-Lenox) for help.

It was a hard night. A “Memorandum of Understanding” (MOU) drafted (see text below) and voted on by these five towns with a greasing from Pignatelli was not received by the committee, he said, in the “gentleman’s handshake” spirit he felt should be forthcoming in resolving an “honest mistake.” Earlier in the evening he had asked the committee “for the common good of the school district,” to “stop pointing fingers.”

“Put down your swords,” Pignatelli pleaded. “I don’t like some of the comments I see in the newspaper.”

Pignatelli explained that the MOU, which received a blessing from Department of Elementary and Secondary Education (DESE) after he engaged the agency, is not a legal document, but an agreement to come together to fix an “unprecedented” problem.

The district’s lawyer, however, advised against signing the MOU. Yet Pignatelli and board members from the five towns never asked for the committee to sign it, but to simply acknowledge it as “a good faith” effort and endorse the steps to be taken. Sheffield selectboard member Nadine Hawver said it was critical for the committee to commit to resetting the 45-day time clock to keep the corrected assessments intact. “You’re not willing to address that,” she said.

The committee voted to approve four elements, identified by the finance subcommittee, important to ironing out the mess. Subcommittee chair Vito Valentini later explained that personally he felt the MOU was a “flawed document.” His subcommittee tried, he said, to “find its intent and go as far as we could physically and legally” without signing it.

The committee eventually did address Hawver’s concerns by voting on one element of the MOU that will keep restarting that clock.

But it was committee member Fran Lartigue’s motion to table the discussion about the MOU for a later time that appeared to set off the chain of events that had selectboard representatives from the five towns grumbling. It was followed by what Sears complained was a Robert’s Rules of Order meltdown, which led to an ungracious remark towards Pignatelli, who responded that he was “offended” the committee appeared unappreciative of his help, on his own time and out of “care and concern for the district.”

Pignatelli said he respected Robert’s Rules, and noted he had spoken during citizens’ speak time.

Committee member Kristin Sparhawk said she didn’t like the idea of tabling an acknowledgement and discussion of the MOU without a date certain to do so.

Rundle wondered why this meeting wasn’t the appropriate time, given “that the towns got together in this spirit…we should accept it as a sign of appreciation.”

“I would love to see this board acknowledge that 5 town selectboards got together to solve a problem,” Pignatelli said. “I don’t think they care if you sign it or not. It would be wonderful, but it’s not a requirement. The [budget] review is important — the clock will be ticking.” He reminded everyone that this situation is a first. “We’re going to become the model,” he said. “How are we going to do it?”

Superintendent David Hastings tried to keep the evening on track by evoking a Biblical metaphor from what he said he recalled from Sunday school. “Moses led his people out of Egypt and then they wandered around the desert and they wandered…I would hope that we would take the shortcut, and the shortcut is going to be through a handshake.”

Pignatelli reiterated that it was important the committee adhere to DESE’s instruction to take the steps in the MOU before annual town meetings.

It was at this point that Sears said even a legislator shouldn’t be able to skirt Robert’s Rules. Stewart had bent the rules somewhat in response to a complicated and unprecedented scenario.

“I could stay home, and be insulted by my own kids,” Pignatelli said. “I have no skin in the game here…I’m trying to help…I work hard at my job.”

Pignatelli was already out the doors when Sears tried to apologize.

Sparhawk moved to accept the MOU and sign it. Vice Chair E. Bonnie Silvers said the attorney said no.

When someone asked Arthur Batacchi his opinion, he said, “this is such a mess that I can’t even begin to understand what’s right and wrong…It’s such a disaster.”

“You may not be alone in thinking that,” Stewart said.

Hawver reiterated that the towns simply want is to make sure the corrected assessment amounts stick.

“We know what you want and we are doing it,” Valentini told her. “We will reset the clock. We’re not leaving town….I don’t understand the complication.” Valentini, chair of the finance subcommittee, grew exasperated, got up and said he was leaving. Stewart stopped him. “You can’t leave,” he said.

On and off, there was laughter. But not much. Committee member Charles Flynn, also an Egremont selectboard member, had recused himself for most of the meeting. Later, he told the Edge the meeting was less a “circus” than “a horror show” that did “a lot of damage to the district,” particularly since it was televised.

“Nine people last night put up a wall and said no: we’re going to do it our way,” Flynn said. “All they had to do was work with the towns.”

Flynn praised Pignatelli. “I’m a Republican and Smitty has my vote from now until forever. There was no reason in the world for him to have to put up with that kind of abuse.”

Flynn had hard things to say about the process. “We could have gone the entire year and done absolutely nothing, then gone to each town at end of year and got anything needed from town meetings, or adjusted down if they overpaid. Or we could have amended the regional agreement [among towns] for one year from statutory to foundation.” Turner’s computations mistakenly used the foundation percentages.

Flynn says committee members “unfortunately” had “discussions that were made behind the scenes, and they came with their minds made up ahead of time.”

“There are egos involved instead of people caring about the kids,” Flynn said. “We have to start remembering that the school is part of community, the key to the community.”

The meeting will air on Channel 17 and on the Community Television for the Southern Berkshires website. To watch on CTSB-TV, click here: https://trms.ctsbtv.org/Cablecast/Public/Show.aspx?ChannelID=2&ShowID=14852

WHEREAS, the Parties include the member towns of the Southern Berkshire Regional School District (the “District”) organized under the provisions of Massachusetts General Laws 71, §§ 14-16I; and

WHEREAS, the Parties desire to set forth their mutual intents, understandings and agreements regarding the administration of the Fiscal Year 2016 budget and the assessments thereunder.