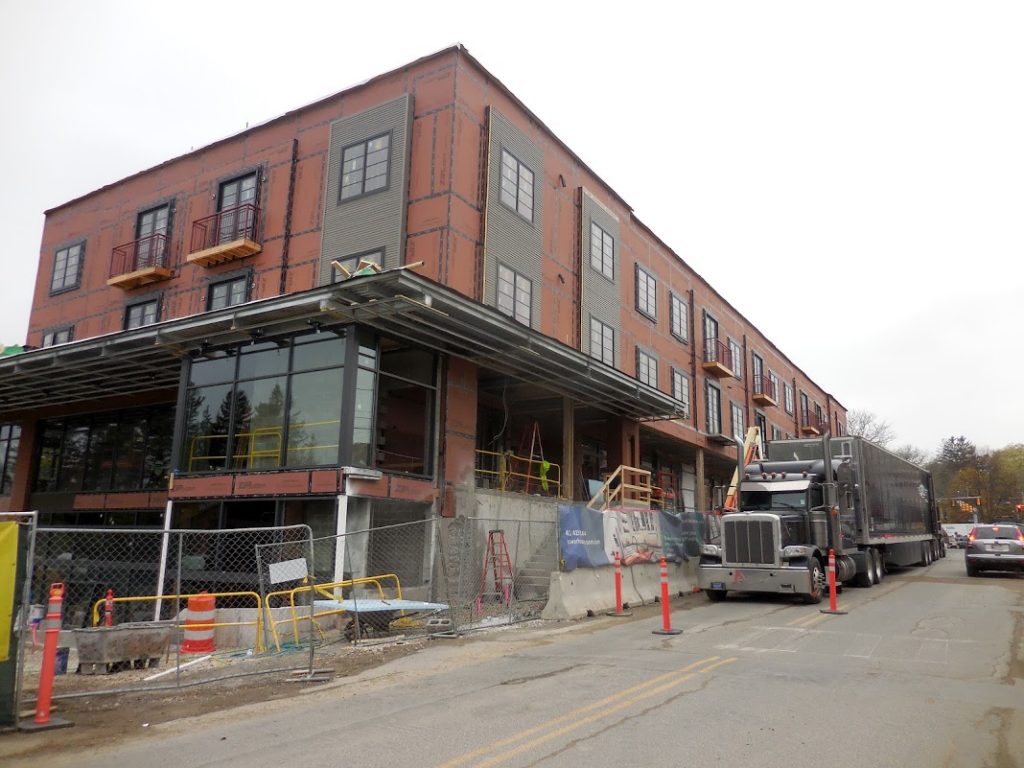 Powerhouse Square, a mixed-use development on Bridge Street in Great Barrington, under construction the first week of May. Photo: Terry Cowgill

Great Barrington — The building project has changed the face of Bridge Street, and perhaps even Main Street, where it is highly visible from the area near Town Hall.

The Berkshire Food Co-op moved last month into the lower level, transforming itself from a modest establishment featuring natural foods to a regional powerhouse more resembling a Whole Foods than a neighborhood corner store.

Through all of this, the $30 million Powerhouse Square project, of which the newly rebranded Berkshire Food Co-op is the anchor tenant, has moved steadily forward. Still, sources, none of whom were willing to go on the record, said they had heard none of the 22 condominium units available for the first phase of the project had been sold and that the project itself was in financial distress.

Nothing could be further from the truth, said Michael Charles, a principal with Benchmark Development, the Lenox-based developer of Powerhouse Square.

“There are no issues on our end,” Charles said in an interview on Thursday. “Everything is looking great.”

Four of the 22 units are under contract and are scheduled for closings in the next few weeks, said Tom Lynch, the listing broker for Berkshire Property Agents, which lists the condos as an exclusive. And interest has picked up recently because of the completion of a pair of model units.

“For us, the timing is great,” Charles said. “The model unit is done. The broker community is excited.”

“We’ve been waiting to have a unit to show to buyers,” Lynch said. “If we had something finished earlier, we would have had more buyers.”

“Preconstruction contracts are rare,” Charles explained. “This is about what we expected.”

Lynch said Berkshire Property Agents had also heard rumors that the project was in trouble but found them to be puzzling since he knew they were not true. Asked whether the condo market supports such relatively high prices, Lynch said typically when sellers establish an asking price, they rely on recent comparable sales. But there really are no comparable sales available because of the dearth of condo units in the middle of downtown.

There are two other condo developments, Oakwood and Copper Beech, within walking distance to downtown, but they’re a few blocks up toward The Hill neighborhood, well behind Town Hall, and they’re between 25 and 30 years old. Powerhouse Square, on the other hand, is brand-new construction.

“There really isn’t much of anything else within walking distance to town,” Lynch said. “There’s really very little on the market.”

Now that the model units are open, Charles said he expects to reconnect with prior contacts and hold regular open houses. He expects a busy summer and fall. A broker open house was held last week.

Asked if he and his partner Brian Cohan have had to lower prices to attract more buyers, Charles said the prices have actually risen since the units first went on sale about three years ago. Preconstruction purchase prices are typically between 10 and 15 percent lower than they are now, Lynch explained.

For lovers of the old co-op, the refrain of Joni Mitchell’s “Big Yellow Taxi” will ring true: pave paradise and put up a parking lot. The old co-op will be smashed to bits and the rubble removed to make room for parking for the newer, larger store. Temporary parking has been created behind the new building but it’s unsightly and not exactly the most convenient arrangement.

Charles says the old co-op building will be demolished later this month or perhaps in August. Meanwhile, crews continue to remove items from the old structure, which he said is being “decommissioned” as utilities are being disconnected in preparation for the day when the old co-op will officially become a part of history.

“The co-op move went as smoothly as it could and we’re excited for them to be in the space,” Charles explained. “We want to complete the parking lot as soon as we can. The store itself looks great. That patio area is great for hanging out.”

Powerhouse has just put up signs advertising for more for retail tenants to fill out the remaining 4,000 square feet on the lower level and complement the co-op. Depending on how it’s configured, those spaces would probably hold four retail businesses of about 800 square feet apiece. Charles is thinking small specialty retailers would be a good fit.

Benchmark has also agreed to work with the town to improve the ballfields at the adjacent Memorial Field, in part by building a retaining wall between the parking lot and the field that would allow for more places to sit and view games or to simply sit outside.

The second phase of the project includes the construction of a 32-unit condominium complex and underground parking garage set back to the south, closer to the John Dewey Academy property, also known as Searles Castle.

The condo units in that building will be somewhat larger and will include a study, an extra half bath, gas fireplaces and an outdoor space for each unit. Work on Phase Two will probably start in the spring, Charles said.

Some have complained that the Powerhouse Square building is ugly and out of scale and character for the neighborhood. But Charles demurred.

“It positions itself nicely on the street and has good visibility from Main Street,” Charles said. “We’ve tried to make the building look like it belongs there. It will look even better as the exterior design comes together.”

The Powerhouse Square project will play a part in the recent renaissance of Bridge Street. After a long battle, the Community Development Corporation of South Berkshire has 45 new affordable rentals planned for 100 Bridge Street. Now known as the Bentley Apartments, the project was originally planned to be much larger. For a time, it looked like the Co-op would build its new store there.

And Vijay and Chrystal Mahida have planned a hotel for the former Searles Middle School. That project has been temporarily put on hold. As is the case with Powerhouse Square, rumors of that project’s actual demise were greatly exaggerated.