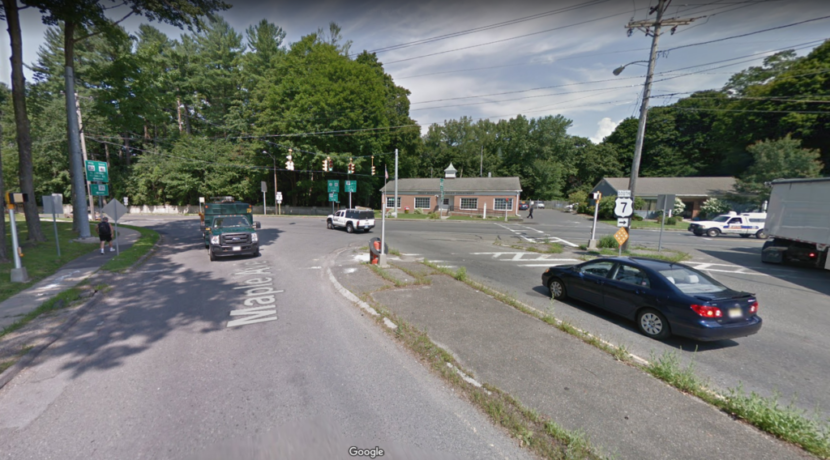 Great Barrington —About 20 people peppered officials from the state Department of Transportation with questions and concerns Tuesday night (November 20) regarding a roundabout the department plans to construct at key intersection.

About a dozen people spoke — only one of them clearly in favor of the project. Many questioned the need for the $2 million project, while others, including nearby business owners, said they are convinced the construction, which could take up to a year, would negatively affect retailers.

“You’re spending $2 million for something that could be repaired,” said Charles Plungis.

Click here to view the packet of information distributed by MassDOT officials before the hearing. And see the video below of the officials introducing themselves and walking the audience through a Powerpoint presentation, which includes an nifty animated simulation of what traffic would look like flowing through the roundabout:

Through a road safety audit in 2015, MassDOT identified the three-way intersection as having an unusually high number of crashes — 16 over the last three years, to be exact. Plungis and others who have lived in the town for many years said they have never seen major crashes there. John Michalak of Nitsch Engineering, a state subcontractor for the project, said three of those crashes involved bodily injury.

“Sounds like this is breaking down to five accidents a year,” said Great Barrington resident Patty Melville. “I don’t recall in my history any terrible accidents there … Is it necessary to undo everything rather than fix a streetlight, add another streetlight, put in some better pedestrian things and sidewalks?”

MassDOT project engineer Mark Moore said the cost of fixing the intersection without a roundabout would be similar to the $2 million figure the department had quoted for the roundabout itself. This is because the pavement is so deteriorated that the road would likely have to be rebuilt rather than simply repaved — adding greatly to the cost. New sidewalks would also have to be constructed, as they would with a roundabout.

Town officials first publicly disclosed the state project in September. Click here to see an Edge article on the roundabout planned for the intersection of Main Street (Routes 7, 23 & 41) and Maple Avenue (Routes 23 & 41).

The intersection, which is where Route 7 north joins routes 23 and 41, is the major route into Great Barrington from both the west and the south. Though heavily traveled, the intersection is rarely the scene of traffic jams, motorists said.

There are also several driveways that feed into the intersection, including the shopping plaza containing Trotta’s Liquors and Manhattan Pizza, and the Great Barrington Police Department station. No one from the police department was present at the hearing, however.

Moore said the new design would improve access from those driveways, though he did acknowledge that it will involve easements and the likely taking of very small portions of land from three property owners: the owners of the Searles Castle property; McTeigue and McClelland jewelers; and the town of Great Barrington, which owns the land on which the police station sits.

State officials say the roundabout will improve traffic calming, flow and safety, as well as make the intersection more pedestrian- and bicycle-friendly. But attendees at the hearing were concerned that traffic from all three directions would have to be narrowed to one lane in the approach to the traffic circle.

While existing signals for pedestrians would be removed, a feature that troubled many of the attendees, MassDOT says those on foot can press a button for a blinking light and that all vehicles must yield to pedestrians. In addition, the distance pedestrians must cross will be only one lane wide, as opposed the existing intersection which requires crossing a width of two lanes. The crosswalks as they currently exist can be dangerous for the elderly and disabled, Michalak explained.

The design phase of the project is currently about one quarter complete. Officials at the meeting expected construction to begin in 2020. It could last up to a year but MassDOT thinks the construction period would more likely span the summer and fall.

That concerns residents and business people, including Melville and Holly Hamer, who are wary after the Main Street reconstruction project of 2014–16.

“I’m feeling highly suspicious … that the Main Street reconstruction was kind of shoved down our throats,” Melville said.

“You have a messaging hurdle here to overcome because the reconstruction of Main Street in Great Barrington is highly unpopular and it was done by you, DOT,” said local businessman Bobby Houston.

But Houston emphasized that while he supports the project and likes roundabouts, MassDOT must do a better job of explaining how the project will benefit the town, its residents, it merchants, its motorists and its pedestrians.

“None of these people believe you,” Houston said. “This is a big paradigm shift.”

But Moore quickly pointed out that while MassDOT handled operations and was responsible for about $5 million of the approximately $6 million cost, Main Street was essentially a town project since the town itself contracted with the designers and engineers.

But that did not deter one business owner at the intersection. Thomas McClelland, co-owner of McTeigue and McClelland jewelers, has been as its current location, the old Christian Science Church, since 2014. McClelland said he has never witnessed a major traffic jam or crash in that time. He further questioned the need for the project, especially in the wake of the disruptive Main Street project.

Others complained that there was insufficient notice and that they had to learn of the hearing by word of mouth. After some confusion, MassDOT project manager Josh Bartus said there were legal notices published in several newspapers in western Massachusetts, including two in Berkshire County. A news item announcing the hearing also appeared in The Edge.

Still others noted that most local residents — and even many out-of-towners — are unfamiliar with the way traffic circles work. The only other full-fledged traffic circle in Berkshire County is a recently constructed roundabout on Route 8 in Adams.

“A roundabout requires a certain knowledge and etiquette,” Hamer said. “Most of us, if we’ve ever experienced one, is on the Cape.”

A MassDOT blog post on the the Adams project said it cost $1.4 million and included new sidewalks, landscaping, granite curbs and pavement markings.

“MassDOT contractors worked with the Town and area businesses in designing the intersection improvements to improve traffic flow and safety at the busy intersection,” wrote MassDOT official Klark Jessen.

The blog also quoted Dan Maloney, the president of McAndrews-King Buick GMC, the auto dealership at the former intersection.

“The completed roundabout not only looks great, but it also works very well,” Maloney said. “It has slowed traffic down making it safer for everyone. It is now much easier for vehicles coming on to Route 8 from Friend Street.”

There is also a technically a roundabout in Williamstown in front of the Williams Inn, but it is oval-shaped and has a spacious park in the interior that includes a historic house. Williamstown is also studying a potential roundabout at the intersection of Main and Water streets.

And the intersection of routes 7 and 102 in front of the Red Lion Inn in Stockbridge has been the subject of endless speculation over the years. Indeed, a traffic engineer hired by the town last year recently recommended the construction of a roundabout there, in part because of a high crash rate.

At the conclusion of the one-hour-and-forty-minute presentation and hearing, Moore addressed a suggestion from McClelland that perhaps the roundabout “should be reconsidered.”

Moore said projects such as the planned roundabout have been canceled before but that some sort of improvements will have to be made at the intersection with or without a roundabout.

Stating the obvious was McClelland’s partner Bill McTeigue:”It seems like nobody here thinks this is worthwhile.”