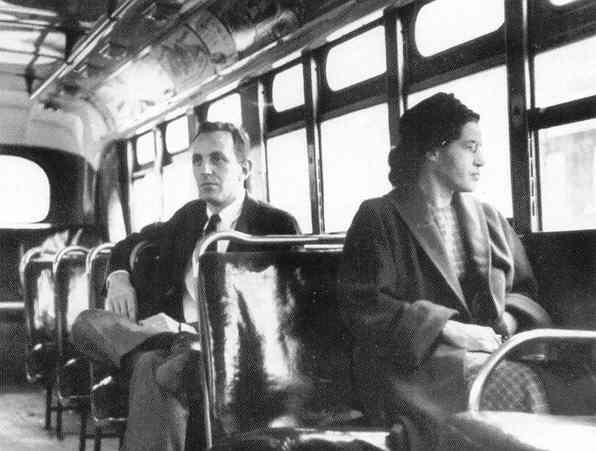 Rosa Parks on a Montgomery, Alabama, city bus in 1956, after the system had been desegregated as a result of her protest.

Editor’s Note: Leif Steinert of Stockbridge sent along this excerpt from William Manchester’s 1974 book, “The Glory and the Dream.” It is particularly relevant on this Martin Luther King holiday.

Her name was Rosa Parks, she was forty-two years old, and on Thursday, December 1, 1955, she was very tired. She found a seat on a Montgomery bus, but when the bus filled up the driver told her to stand so a white man could sit there. It was an old southern custom for Negroes to surrender their seats to whites. It was also against the law for anyone to disobey a bus driver’s instructions. Mrs. Parks thought about it for a moment and then said she wouldn’t move. 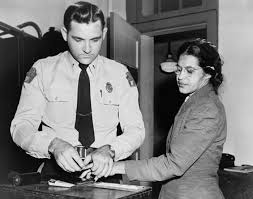 Rosa Parks being fingerprinted after being arrested for refusing to give her seat on a city bus to a white person.

Arrested at the next stop, she was charged with a misdemeanor, found guilty, and fined ten dollars. That made Mrs. Parks’s friends angry, and she was a popular woman; within forty-eight hours mimeographed pamphlets being distributed in Negro neighborhoods called for a one-day boycott of all city transportation. The boycott was such a spectacular success that leaders of Montgomery’s black community started asking each other larger questions. The city’s 25,000 blacks accounted for 75 percent of the bus company’s patronage. Suppose they extended the boycott and set terms for an end to it? Eventually the management would either yield or go bankrupt.

Martin Luther King, an unknown twenty-six-year-old clergyman had come to Montgomery the year before to become pastor of the Dexter Avenue Baptist Church. The white South paid grudging respect to black clergymen, but King was one of the new Negroes, and he lay outside the southern white experience. He was a Ph.D., a product of Harvard, and a genuine scholar. 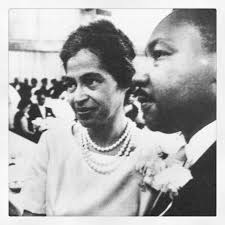 Spring passed, summer passed, and still the spirit of the blacks showed no signs of flagging. The mayor confided to friends that he had never dreamed that Negroes could be this determined. The bus company sank into debt. Drivers drifted into other jobs or left the city. The Negroes showed every sign of being able to survive without them. Some had become accustomed to walking to work, some had bicycles, and for the others King had organized a vast car pool with two hundred automobiles.

The mayor announced that this was illegal. In the twelfth month of the customer strike King and the other black leaders were arrested for running a business enterprise without a franchise. They were on trial in state circuit court when electrifying news arrived. The Supreme Court, which had already overturned the “separate but equal” doctrine for recreational facilities as well as in schools, had now killed it in public transportation. Discrimination on buses was now a violation of federal law.

Martin Luther King was free. He was, in addition, a world celebrity. The unprecedented boycott had dealt Alabama segregation a devastating blow. American Negroes everywhere had found new hope, and the young black preacher had been catapulted into the first rank of the struggle for civil rights. King did not gloat. He advised his flock to act with dignity and without pride. He said, “We have been going to the back of the bus for so long that there is danger that we will instinctively go straight back there again and perpetuate segregation.” At the same time, he continued, “I would be terribly disappointed if any of you go back to the buses bragging, ‘We, the Negroes, won a victory over the white people.’ If you do, our struggle will be lost all over the South. Go back with humility and meekness.” 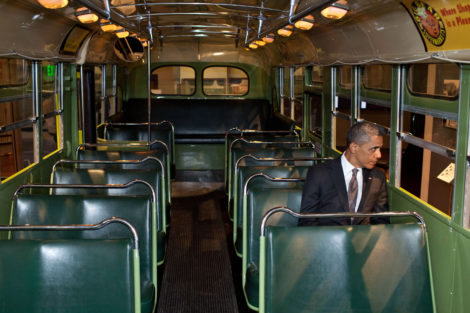 He would have been less than human if he hadn’t ridden a bus himself when the boycott ended, 381 days after Rosa Parks had started it. The driver said to him, “Is this the Reverend?” The clergyman said, “That’s right. How much?” It was fifteen cents— up a nickel from the year before— and putting the coins in the slot he took a front seat. He said afterward, “It was a great ride.” Most Montgomery whites were relieved to have it all over, and some were in good humor. A bank teller wryly told a reporter, “They’ll find that all they’ve won in their year of praying and boycotting is the same lousy service I’ve been getting every day.” On one bus a white man said to nobody in particular, “I see this isn’t going to be a white Christmas.” A nearby black smiled. “Yes sir,” he said. “That’s right.”