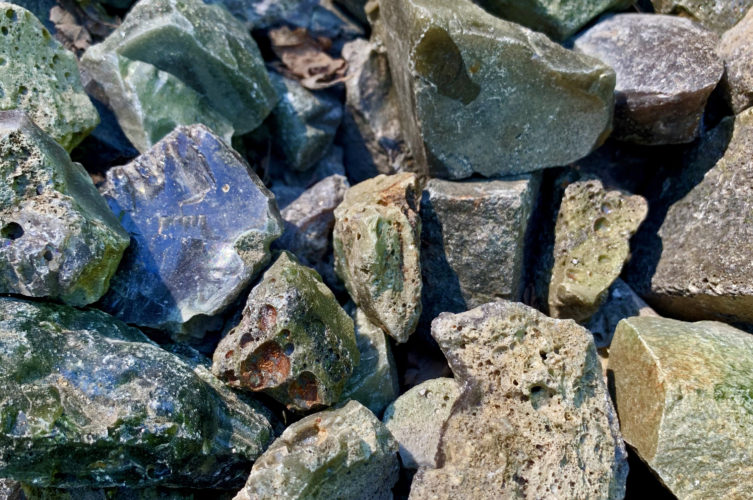 As we cross the wooden bridge that spans the Blackberry River, and continue along a high-canopied woodland trail that ascends Canaan Mountain, it’s hard to imagine we will be soon surrounded by immense half-buried piles of an object I’d heard so much about but had yet to seek out until today.

Moments later my young travel companion John Peruta, who has lived in these parts for eight decades and knows just about everything there is to know about these parts as well as a lot of other things, motions towards what looks to be a mound of dirt. But upon closer inspection, one sees that it’s dense with shiny glass-like shards of varying colors of blue, green, black and peculiar brittle shapes.

Much like coming upon a trove of shiny-smooth horse chestnuts, it’s hard to hold back as I reach down, pick the ones that catch my eyes, and stuff them into my pockets, despite their being of little determinate value. Pretty as they are, they’re slag all the same, a glass-like byproduct of iron smelting. Discarded as worthless well over a century ago, they’re nevertheless pretty to look at and irresistibly smooth to the touch.

Back across the Blackberry River, we explore the historic Beckley Furnace, or what’s left of it, including a giant smelter chimney that culminates in a space that once held a hell-hot crucible of melting ore. The slag was the stuff that rose to the top and had to be skimmed off and disposed of.

The site is an historic and scenic treasure hidden in plain sight, replete with a self-guided tour of the giant turbines, blast furnace, and explanations of how it all worked. I don’t know much about turbines, but the ones here resembled Hollywood recreations I’d seen of the Titanic’s engine room.

Story has it that surveyors working in the area about three hundred years ago were shocked to find their compasses going haywire. The reason? The region was rich in iron ore — and was soon filled with opportunistic iron forges. But they were slow and inefficient. What was needed was a blast furnace. Over time, nearly two dozen such furnaces dotted northern Litchfield County, including the Beckley Furnace, furnishing our young nation with raw pig iron that could be shaped into cannons, muskets, and eventually, infrastructure. Unlike a simple forge, a blast furnace harnessed the rivers to spin its turbines, which in turn blasted fresh air into the furnace until it reached a scorching 2,800 degrees Fahrenheit.

A visit to an historic blast furnace might seem a little unusual, but in the age of Covid-19, it’s what might be termed a “trip within reach.” And as a reader of this publication, you’re likely well within reach of Northwestern Connecticut. This sort of adventure has the elements I look for in my local outings: a bit of history, a scenic drive to get there, and some easy hiking to stretch my legs once I arrive. The drive to Beckely, regardless of direction, is just plain pretty. And after a self-guided tour of the furnace site and slag piles, there’s the four-mile Iron Trail up and along Canaan Mountain to enjoy. And then there’s beer. Just down the road is Norbrook Farm Brewery in Colebrook. That’s right, a brewery on a farm — perfect for sitting outside and enjoying an afternoon or sunset before heading home. The brews include IPAs, ale, porter, saison, or my favorite, Kölsch, a pilsner that harkens back to Cologne, Germany.

Here are a few other COVID-19-friendly mini excursions tailor-made for late summer and early autumn:

• Take a leisurely drive to the Tyringham valley. Park in “town” and explore the little cemetery and then walk up the Tyringham Cobble, a gentle meadow and hill that belie their violent birth along a geological thrust line. A short drive down the road and you’ll find the Ashintully Gardens with their iconic Doric columns, all that’s left of a 35-room marble mansion. Along the way, you’ll pass Santarella, Tyringham’s gingerbread house with its whimsical hobbit-like wavy thatched roof. Drive from there to Monterey and stop for a tour of the Bidwell House Museum, a Georgian saltbox built in 1760 as a parsonage. The house is closed due to Covid-19, but the grounds are open and well worth a visit.

• Start in West Stockbridge at the No. Six Depot Café for one of the best breakfasts around (fresh muffins, croissants, Spanish tortillas, local granola with fresh fruit) and of course aromatic coffee to start your gears turning. The Depot has a nice patio with tables safely distanced from each other. Walk down the street to TurnPark Art Space, a magical sculpture park nestled on 16 acres on the edge of town. After your art ramble, drive over the mountain towards Lenox and turn off at Olivia’s Overlook just above Kripalu for an unparalleled view of the Stockbridge Bowl and Monument Mountain. Great hiking starts right there, so it’s a great place to stretch your legs.

Before you get to Tanglewood, turn right onto Rt. 183 and head towards the Berkshire Botanical Gardens for a visit. On your way, you’ll drive through the adorable micro-village of Interlaken. Take Rt. 102 into Stockbridge and tour its quintessential New England cemetery with the famous Sedgewick Pie, where the first woman to be freed from the shackles of slavery in Massachusetts, Mum Bett, is buried, along with the barrister who argued her case, Theodore Sedgewick.

South of town, turn onto Park Street for a walk across the suspension bridge over the Housatonic River. If you go left along the resulting trail, you will end up at a lookout tower (Laura’s Tower) with flawless fall foliage vistas; if you turn right along the trail you can meander down to the Ice Glen, a glacial ravine where you just might find a smidgen of snow in the middle of summer. Crossing back over the foot bridge, see if you can find the Laurel Hill Association’s Stone Rostrum, a hidden beauty just out of site but well worth the exploration. And while you’re at it, here’s another challenge: see if you can find the monument to the ancient burial ground of the Stockbridge Indians. Consider taking a knee out of respect and saying their name while contemplating how history is written.

• Start at the Bennington Battle Monument, a 300+-foot stone obelisk commemorating a turning point in the Revolutionary War. It was here that England’s plan to cut off New England from the rest of the Colonies was dealt a fatal blow when a band of untrained Yankee volunteers led by General John Stark soundly defeated the decorated English General John Burgoyne who, incidentally, was something of a dandy who went on to write comedic plays back in London. From there, head down Rt. 7 to Williamstown for a stroll across the architecturally distinguished campus of Williams College, a celebrated small liberal arts school allegedly tougher to get into than Harvard and more rigorous, to boot. Consider a side trip to two of the finest art museums in New England, The Clark, also in Williamstown, and Mass MoCA, fifteen minutes away in North Adams. (Both are open. Check their web sites for visiting rules.)

Once you’ve worked up an appetite, dine at the tippy top of Massachusetts atop Mount Greylock. At nearly 3,500 feet, it’s the highest point in the state (not including Great Barrington’s Theory Wellness, which seemingly attracts even more tourists). The entrance is just south of Williamstown along Rt. 7 (if you’re headed back south, exit the mountain along the road that takes you to Lanesboro). Once you (and your car) have summited, check out the other stone obelisk monument, the Massachusetts Veterans War Memorial Tower. Recently renovated, its beacon can be seen for miles around. As you stroll around the miniature pine forest with its altitude- and weather-stunted trees, consider that this harsh landscape is a favorite stopover for migrating birds, who view remote mountain tops like this as ephemeral landing strips as they “hop” from one summit to the next.

Quite possibly the coolest place to eat a meal in Massachusetts is the restaurant housed in Bascom Lodge. Not only is it atop a mountain in a building constructed during the Great Depression by the Civilian Conservation Corps, but the food exceeds expectations. Just be sure to make a reservation well enough in advance — it’s a popular place, and you can imagine that planning ahead is a priority for such a remote eatery. If you’re early, play cards in the sun porch, or sit by the giant fireplace if there’s a chill.

Afterwards, with a full belly, step outside, breathe in the crisp mountain air, and witness the magic of a Berkshire starry night, knowing that, despite all the world’s troubles, you’ve also “temporarily landed” on a serene mountaintop, surrounded by a rugged yet sublime and blessedly accessible beauty. 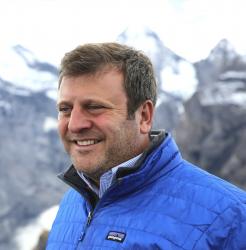 Andrew Blechman is a former Great Barrington selectman and member of the Finance Committee. He is the author of two nationally reviewed books for Grove Atlantic, and has written for the New York Times, Los Angeles Times, Smithsonian magazine, The Atlantic, among other publications. His pup, Gingersnap, a wolverine-honey badger mix, is perfect in every way. Read More