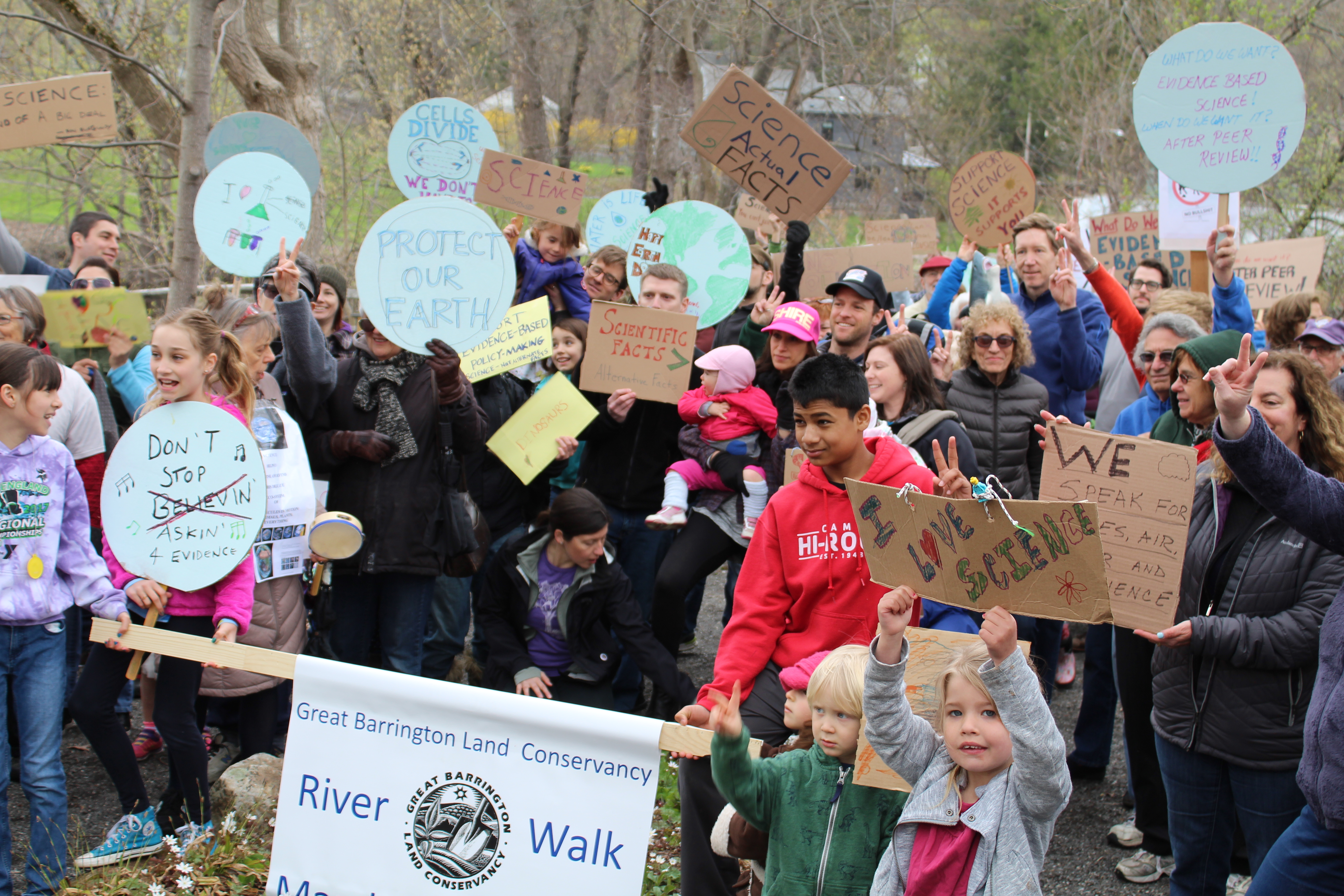 Great Barrington — The global movement to affirm the principles and integrity of scientific inquiry came to South County Saturday, as nearly 200 activists braved chilly temperatures and the threat of rain to participate in the River Walk’s March for Science. They joined demonstrators around the world protesting the Trump Administration’s attempt to discredit rational investigation when it contradicts political ideology.

“This is going to be a celebration of science and the River Walk,” said Christine Ward, president of the Great Barrington Land Conservancy, the parent organization that funds the River Walk. “This is part of a greater movement across the United States.”

The Great Barrington march was but one of numerous protests concurrent with the principal March for Science in Washington, D.C. There were 531 satellite marches in cities around the world, including in Massachusetts Boston, Amherst and Pittsfield. The march was scheduled on Earth Day, April 2, in part because of the obvious connection between science and the planet.

The march was also an opportunity for those involved in the resistance movement against the Trump administration’s denial of the scientific evidence of climate change to make their feelings known. “Protect-our-earth” signs were common, probably in response the fact that Trump wants to cut the Environmental Protection Agency budget by 31 percent, to $5.7 billion from $8.1 billion, and to eliminate a quarter of the agency’s 15,000 employees. Many analysts, including Christine Todd Whitman, EPA administrator for President George W. Bush, think such a dramatic loss of resources for the EPA would endanger public health.

In addition, signs announcing membership in the resistance and opposition to “alternative facts” were everywhere, along with pro-environment, pro-climate-change-action and pro-science placards. Some openly ridiculed Trump for his past statements that climate change is an “expensive hoax … created by and for the Chinese.”

Chants included “It is real, it is clear, scientists are welcome here,” and “Protect our earth; science is the solution.” And a broad spectrum of age groups was represented, from senior citizens to toddlers.

The march began at the W.E.B Du Bois River Park, near the intersection of River and Church streets, and proceeded along Main Street to River Walk’s Main Street entrance upstream near Rite Aid. Marchers then returned to the starting point by following the River Walk trail along the Housatonic River.

“So we had a march both down the street so that the general public knows,” said River Walk founder and administrator Rachel Fletcher. “And then people doing the marching could stroll by a place where we have done our best to honor science.”

Fletcher said she was “shocked at the turnout,” which a River Walk count estimated at 180. Since it was Earth Day, River Walk had already scheduled its annual riverbank cleanup, which was scheduled to take place before and after the march. And there was a larger march in Pittsfield scheduled to start two hours after the Great Barrington event.

“We didn’t know what to expect,” Fletcher said. “What moved me most of all were all the horns honking on Main Street.”

Fletcher credited much of the success of the event to Ward and the well-attended banner-making session she held before the march. Fletcher also cited Denny Alsop, the Stockbridge environmental activist and early supporter of River Walk who canoed across the state last summer — for the second time — to draw attention to the need to remove PCB contamination from the Housatonic River and to restore waterways throughout Massachusetts.

River Walk, which will be 30 years old next year, started out as a riverbank cleanup organization. Alsop, Fletcher said, was such an integral part of that first effort that it was named the “Denny Alsop Riverbank Cleanup,” during which 16 volunteers removed 15 tons of debris from the riverbank.

“He was a personal inspiration,” Fletcher recalled. “After that, it really mushroomed into being a bigger thing than we ever imagined. Before his involvement, you couldn’t even see the river, it was so choked in bittersweet and garbage.”

“Do not stop here!” Ward urged the crowd. “There are so many ways to be involved in the community.”

Some of those vehicles for continued involvement in the cause were also represented at the River Walk march, including the Berkshire Environmental Action Team (BEAT) and Greenagers, a Great Barrington-based environmental education organization for teens.