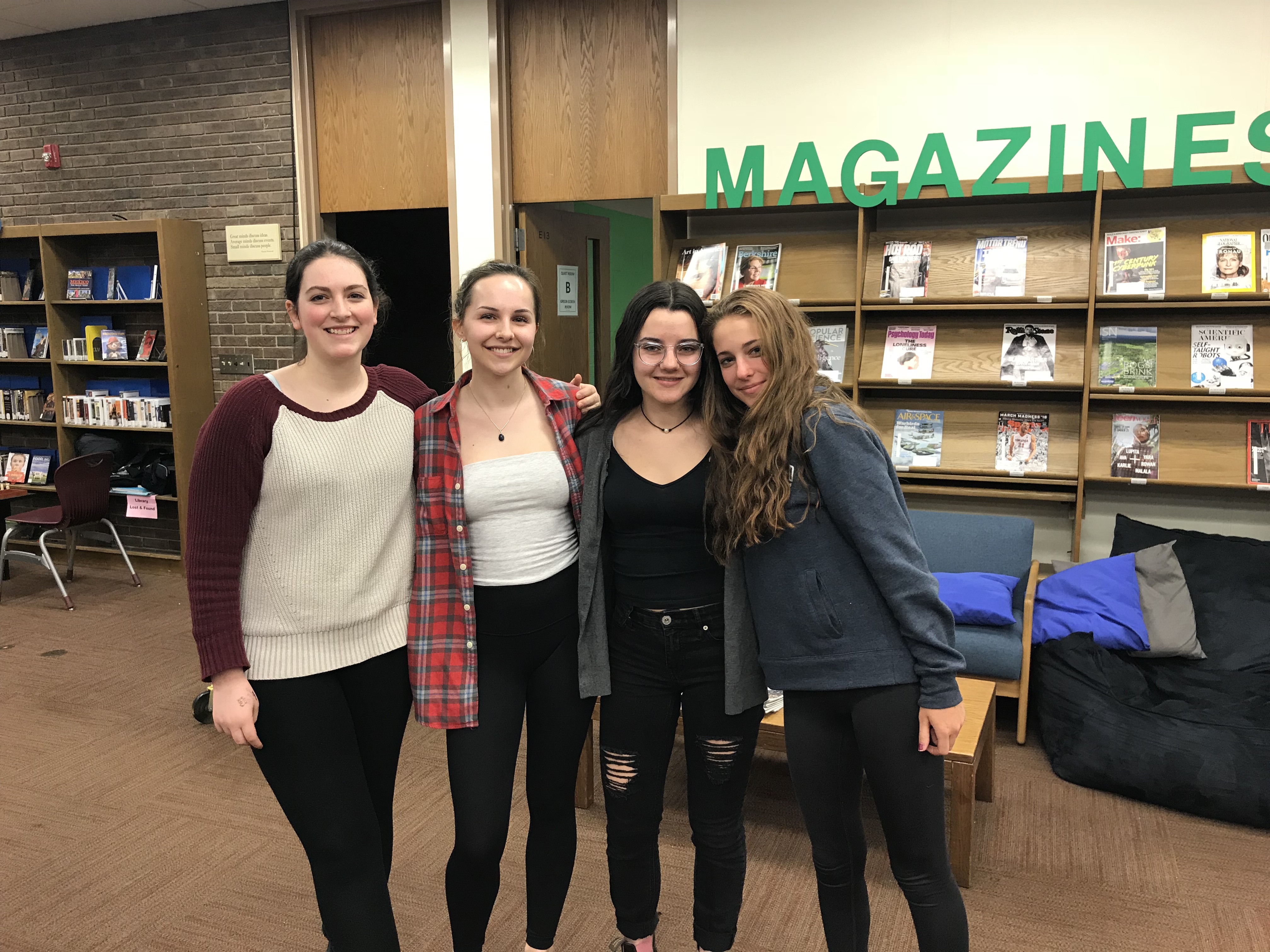 Great Barrington — The shock of the presidential election to the future of this country was not lost on young people at Monument Mountain Regional High School in November 2016. During the campaign cycle, students had been gathering in classroom B-12 of English teacher Michael Rosenthal to discuss their feelings about the current political climate in the buildup to the election. The more the year went on, the more important these meetings became.

Lucy Hoffman founded the anti-racist, anti-sexist student activist group Rise along with another student and Rosenthal in the wake of the 2016 election. Hoffman had an independent study in creative writing with Rosenthal but increasingly used that time to pursue her interest in politics. The more intense the political atmosphere in the country became, the more passionate she was.

“[Rise] started as a place where we could just get together and talk about how we felt. Just to be able to talk to each other and have discussions about it was really great,” Hoffman explained.

She added that, while it was important to have a space to talk about how the students felt, she “thought that we needed to have an outlet to express these feelings more and actually do something.”

“A lot of us felt really let down,” Hoffman said about the time following the election, “because we’d grown up in the Berkshires where it’s kind of like you live in a bubble and the majority of the people you meet just reinforce the things you already know. That’s partly why the 2016 election was so jarring. It was a way of learning that so many people have these other ideas about the world and about life.”

Hoffman said that Rise was inspired by the wave of activism that swept across the country in 2016. The group started to grow from a meeting group of a few like-minded students into a more community-oriented space. Rise developed a strong relationship with Railroad Street Youth Project and Multicultural BRIDGE and worked on various forms of outreach, such as an open mic-style event in which students spoke out, read poetry and played music. The event raised approximately $600, surpassing its original goal of $200, all of which was donated to Planned Parenthood.

Rosenthal had been hosting some forums among seniors last year on sexual harassment, misogyny and gender inequality around the same time as Rise’s development. More political topics arose the more the dialogue was pursued. “We were really trying to ride the wave of this glorious new force of activism in the country,” Rosenthal said.

After the election, Rosenthal suggested that he and Hoffman “put the creative writing on the back burner and go full-tilt into studying activism.”

Rosenthal also cited an incident at Monument that occurred around the same time as the election, before the development of Rise, in which a racial slur was made to an African-American football player on the Monument team by his own teammate. The comment was made after the student kneeled for the national anthem before a game in solidarity with professional football player Colin Kaepernick in protest against police brutality and racism in the United States.

The incident at Monument helped spark a wave of controversy and interest in social justice and change throughout the school and town, as Kaepernick taking a knee had done throughout the country. Rosenthal said that the event on the football field spawned a social-media discussion that complemented the timing of Rise’s development.

Rosenthal explained: “I was really impressed with some of the conscientious writing in that very casual format that came from some of the students and it made me think at the time, ‘There are these really intelligent, motivated, well-intentioned students out there.’ I was interested in how we could pull these forces of change together in defense of what I hope would be our community’s core values–at least, the social values I certainly try to live by and endorse–of anti-racism.”

Hoffman is now studying political science and criminal justice at Northeastern University and has continued her activism in the Boston area. She is confident that she left Rise in good hands.

Maurino, who is 16 years old, said that Rise was created by students who wanted “the ability to make change and a space to speak about their frustrations with our country.”

While the students leading the group last school year were more strained by their schedules and by the smaller number of students involved and leading the group, the creation of the group in 2015–16 laid a solid foundation upon which Rise could further realize its purposes and goals in 2017–18. Maurino said that the group held meetings to discuss what the project meant to each of them, how it was to be organized, and what they hoped to achieve in the beginning of the 2017–18 school year.

“Later, we started holding open lunch meetings for our peers and the club slowly began to gain traction,” said Maurino. “We made stickers for publicity and for fun and handed them out. I see them a lot now on phone cases and water bottles and things, which is really awesome because it’s evidence of the success we’ve had in gaining club members.”

Maurino said that about 10 to 20 students attend the weekly meetings, but some weeks there are more and some fewer.

So far in the current school year, Rise, in collaboration with Multicultural BRIDGE, a local nonprofit that promotes “mutual understanding and acceptance among diverse groups,” launched a Not in Our Town/All Hands In anti-bigotry pledge within the small high school, which gained 125 signatures from teachers and students.

Following the pledge, Doren and Maurino wrote an article about the anti-racist campaign for NIOT’s blog. In the piece, they discuss how growing up in the Berkshires can often feel like being protected by “a bubble” “from the ‘real’ problems, and at the same time we – or those in power – can often turn a blind eye to the existence of issues such as racism in our very own community.” The anti-racist pledge was the beginning of Rise’s campaign to burst that bubble.

Doren and Maurino continue in the article, “[BRIDGE] introduced us to Not in Our Town and the All Hands In movement. We loved the inclusivity of the movement: anyone could engage in the discussion or sign the pledge. It was a skill-nonspecific way to create a much-needed dialogue.”

Following the publication of their article, their next move was to coordinate within the school as well as with local government and the community to organize an all school walkout March 14. The event took place in solidarity with students across the country protesting gun violence in the aftermath of the recent school shooting in Parkland, Florida, in which dozens of students and teachers were killed and wounded. Rosenthal told the Edge that the walkout lasted about 25 minutes and was attended by approximately 250 students, teachers and community members.

Maurino said that the walkout will help Rise “join young people just like us all around the country.”

Rise’s next goals are an open-mic and dinner fundraiser at Fuel Coffee Shop in Great Barrington in late March, of which the proceeds will go to the Berkshire Immigrant Center, a nonprofit in Pittsfield that provides educational, legal and outreach-based support to immigrants in Berkshire County. Rise is also planning a screening of the documentary “Girl Rising,” which is about empowering oppressed women through education throughout the world, at the Triplex Cinema sometime in April. The scheduling of these two events is not yet pinned down.

Seventeen-year-old Fionna Shea, one of the leaders of Rise, explained that Rise has grown since its creation and continues to do so. She noted that, to deal with the turnover of students graduating and thus leaving, Rise is working to ensure the group’s sustainability by “selecting the most appropriate leaders once we have graduated and continuing to do school-wide events to publicize.”

Another leader at Rise, Mae Rose Whaley, 17 and a junior at Monument, got involved in the group at the end of her sophomore year and said that, in its first year, the program was composed mostly of seniors but has grown in part due to the interest younger grades have taken in the group this school year.

Speaking on the importance of the growing number of young activists in the country and her inspiration to join Rise, Whaley said: “Not only do we need activism, we need student activism. We need young activists who are just coming into the adult world because a lot of the problems that we’re facing now have been caused by previous generations, so it’s just very inspiring to me that there are all these youth leaders popping up all over the place and taking control and pushing to change things.”

Looking forward, that the group is hoping to branch out more into the community to grow, Whaley told The Edge, by strengthening their collaboration with groups like Multicultural BRIDGE, the Berkshire Immigrant Center, and Railroad Street Youth Project, a youth leadership and outreach program in Great Barrington.

“So we’re really trying to distinguish ourselves from other school clubs,” said Whaley. “Even though we’re operating out of Monument, we really want to be a community organization rather than just a school club. Right now actually is a great time for Rise. We’re now seeing a bunch of people who had never heard about Rise learning about it.”

Rosenthal has discussed – with students, other faculty and the administration – ways of incorporating social justice issues into subjects like literature, history, film and others, and also spoke of the possibility of creating courses explicitly based around issues of social change, Black history and feminist history, particularly in the English and social studies departments.

Each member of Rise who spoke to The Edge felt a sense of urgency to confront the current political climate with action and outreach rather than fear or cynicism, and most discussed plans to continue their political activism in some form after high school.