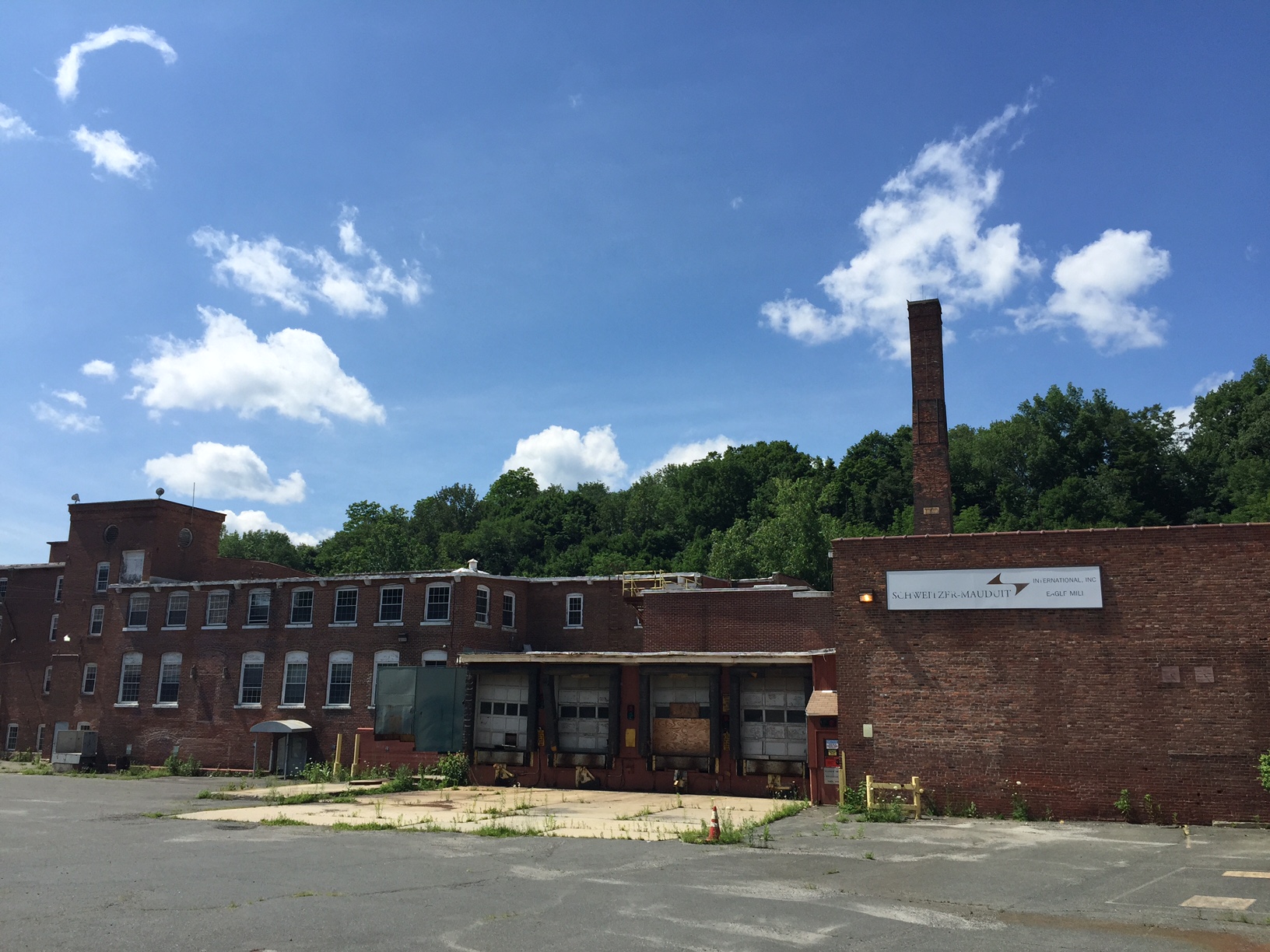 Lee — An old mill redevelopment plan that could have huge implications for downtown Lee has been changed to include a larger hotel in a different spot and a food marketplace, but there are still numerous hurdles that must be overcome to make it a reality.

Developer Jeffrey N. Cohen’s $60 million plan to redevelop the historic Eagle Mill has been altered. The proposed hotel will increase in size from 85 rooms to approximately 100 and the hotel building itself will be moved to an adjacent lot. A mix of 122 affordable and market-rate rental apartments continues to be part of the proposal.

Meanwhile, Cohen and his company, Mill Renaissance LLC, have reached a preliminary agreement with Marketplace Hospitality, a catering and cafe specialist based in Sheffield, to open a public market or food “marketplace” as part of Cohen’s complex. The vision for the marketplace includes food kiosks and stalls featuring a variety of cuisine and perhaps a space for entertainment — not unlike a mini-version of Boston’s Faneuil Hall Marketplace.

“I’d like to say it’s the best of the Berkshires,” Cohen said in an Edge interview. “We will have great food of many different kinds. It’ll be kind of a destination festival market.”

There is no question that the reuse of the long-closed former Smith Paper Company mill on West Center Street will change downtown Lee, if not transform it altogether. But many pieces of the puzzle have to fit together before it becomes a reality.

Some of them are little more than pro forma. For example, zoning must be changed to allow residential development on property zoned as industrial. So the town is considering enacting a so-called “smart growth” 40R overlay zone, as permitted by a state law encouraging affordable housing.

The Lee Planning Board held a public hearing Monday night to discuss the measure. The board had been mulling the matter for some time and, unbeknownst to Cohen, had worked to draft a 40R bylaw in conjunction with the Berkshire Regional Planning Commission. The bylaw included the Eagle Mill property.

“Because I had not participated in the drafting, there were problems with it,” Cohen said.

Cohen said the proposed zoning map did not include the new location for the hotel and that he and the board needed to work together to make sure his plans were consistent with the board’s vision. And that they did at Monday’s meeting when Cohen made his revised plans public earlier than he had anticipated.

Planning Board Chairman Tom Wickham told The Edge one of the goals of the 40R overlay zone is to make residential uses allowable by-right rather than by special permit. The latter can be a cumbersome and expensive process whose applicability in cases such as Cohen’s is dubious.

Some of the adjacent property owners, including some for whose land Cohen is negotiating sales, have grandfathered homes in the industrial zone.

“It’s terrible to [have a home] in the industrial zone,” Wickham explained. “It’ll cost you $750 to get a permit just to build a deck … 40B would increase the value of their properties.”

Another hurdle is that in order to provide adequate water service to the proposed development, the town must upgrade the water line that serves that northern portion of downtown, which most people think of as the area where Joe’s Diner is located.

The town applied in August for a $6 million MassWorks infrastructure grant from the state to fund the upgrade. Wickham said it typically takes a month or more for the state to process the application and make a determination.

Wickham said he is convinced the grant application is a strong one since it satisfies many of the activities the program intends to support: multi-family housing development at a density of at least four units to the acre (both market and affordable units); economic development in weak or distressed areas; and community revitalization to promote mixed-use development.

In addition, Cohen said state agencies tend to look favorably on grant applications that enable towns to leverage state dollars with private-sector investment such as his proposal, which he estimates would create up to 150 jobs (not counting construction jobs) and add property-tax and rooms-tax revenues to the town’s coffers. In addition, the state is bound to look favorably on the saving of an empty historic mill that would otherwise be torn down without a viable redevelopment plan.

Finally, Cohen must secure the purchase of seven properties on West Center Street where he intends to site the hotel. He says he is under contract to buy four of them and two of the three remaining properties “on terms that are acceptable to the sellers.”

Cohen said originally he had planned to put the hotel in the mill itself but there was only enough square footage for 58 rooms. But after talking to experts, including hoteliers Vijay Mahida, Joe Toole and Sarah Eustis, he concluded that 85 to 100 rooms is the “optimum size for operating efficiency.”

“So we adjusted our plans for a freestanding hotel,” Cohen explained.

In addition, Cohen also needs to obtain low-income housing tax credits from the state. And the historic approvals and historic tax credits he needed from state and federal authorities has been an arduous process.

As for the hotel, he is convinced that there is room in the market for it. Cohen, who owned two hotels in Washington, D.C., is not yet sure whether the Lee hotel will be branded or boutique. As The Edge reported in an in-depth article back in July, skeptics are wondering whether the Berkshire County market can absorb another large hotel. In the last several years, dozens of hotels and resorts have been constructed or are in the planning stages for major expansions. The market is thought to be especially crowded in Lenox.

What will set his hotel apart, Cohen says, is that it will be in a downtown and very close to Exit 2 of the MassPike. The proximity to the turnpike will make it attractive not only to travelers but to organizations that might want to hold conferences there. In addition, anyone headed to Lenox or Great Barrington from the east or west will pass through Lee.

The location also puts Cohen’s hotel in line with recent trends, especially among millennials, that place a value on walkability. In addition, he’s convinced the rental units will be attractive to empty-nesters or senior citizens looking to downsize.

“It’s an exciting lifestyle opportunity that is appropriate for the way people live now,” Cohen said. “It’ll be like a village.”

In the four and a half years the Eagle Mill project has been in the works, Cohen has seen ups and downs, but he says he’s in it for the long haul. He pointed to a UMass study indicating that on average it takes nine and a half years to redevelop a mill.

There have been lots of changes locally that have contributed to the slow pace. Lee Town Administrator Bob Nason recently retired. State Sen. Benjamin Downing opted not run for re-election last year and a new governor took office in 2015. Nason and Downing were replaced by capable people but, as Cohen says, “Every time there is a change, it adds time.”

Wickham said most people in Lee have long wanted a hotel downtown and that Cohen’s proposal is especially appealing since reuses an old mill.

“It keeps most of the industrial look, the facade, the brick, but it will tear down a few metal buildings,” Wickham said. “It’s unlikely a paper mill will come back there and employ 400 people. I this I see as a viable option.”

Wickham, who is also a selectman, said there are no major objections from the Planning Board or the Board of Selectmen. He especially likes the fact that the project would encourage more walking, in part because “We are a very walking friendly town.”

“I like the whole project,” Wickham said. “It’s a big change for Lee but in the right direction.” Without it, the abandoned mill, which he said closed in the 1980s, would “just be blight in the town.”

Chef David Renner, one of Marketplace Hospitality’s owners, could not be reached for comment. The Planning Board’s hearing on the proposed 40R overlay zone bylaw continues on Sept. 13 at 6 p.m. on second floor of Town Hall.