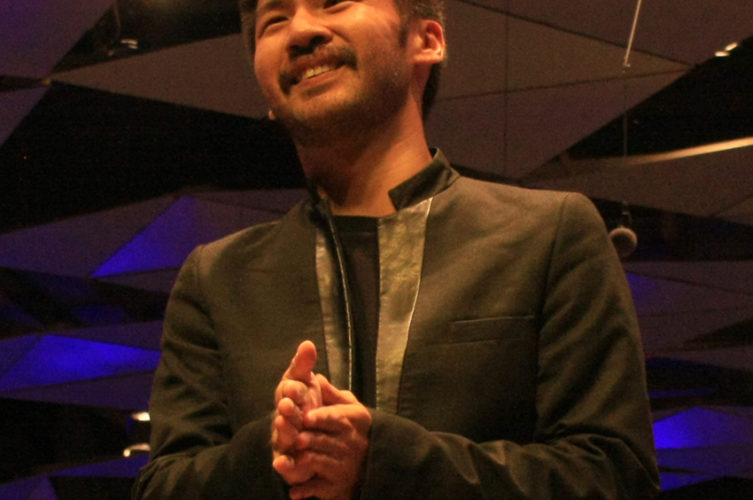 After encoring with Elliot Carter's electrifying "Catenaires" Aug. 23, a grateful Conrad Tao thanks the Tanglewood audience for enjoying themselves. Photo: David Noel Edwards

Lenox — Tanglewood’s most thrilling moments often come without warning. A last-minute substitute appears on stage, and an audience is privileged to witness the launching of a stellar career. Conrad Tao substituted for pianist Ingrid Fliter on Friday, Aug. 23, and, although he launched his own stellar career years ago (his third disc with Warner Classics is due this fall), he had never before appeared with the Boston Symphony Orchestra at Tanglewood or anywhere else. So a number of concertgoers on Friday had the pleasure of “discovering” Tao when he took the stage to perform Maurice Ravel’s dazzling Piano Concerto in G. It’s a thrilling show piece, and Tao delivered it with supreme aplomb and obvious relish — not to mention overwhelming force.

But he was only getting started. When the crowd demanded an encore, Mr. Tao obliged them by playing Elliot Carter’s insanely exhilarating “Caténaires.” If the crowd got excited over the Ravel, it became positively unhinged over the Carter. In fact, it seems unlikely that Elliot Carter’s music has ever gotten such an over-the-top response from a Shed audience. In any case, it is inconceivable that Mr. Tao would not be asked to perform again with the BSO at his very earliest convenience.

Friday’s show started with Felix Mendelssohn’s Overture to “A Midsummer Night’s Dream,” which BSO assistant conductor Yu-An Chang directed with assured finesse and crisp precision. After intermission came Schubert’s Symphony No. 2. But because Conrad Tao had already effectively stolen the show with the Ravel and Carter pieces, it took a while for everyone to adjust to the more serious tone of Schubert’s music. (Schubert rose to the occasion and held his own, thank you.)

Yu-An Chang, a 2018 conducting fellow of the Tanglewood Music Center, became assistant conductor of the BSO last fall. His readings of all three pieces on Friday evening’s program were spirited and rock solid.