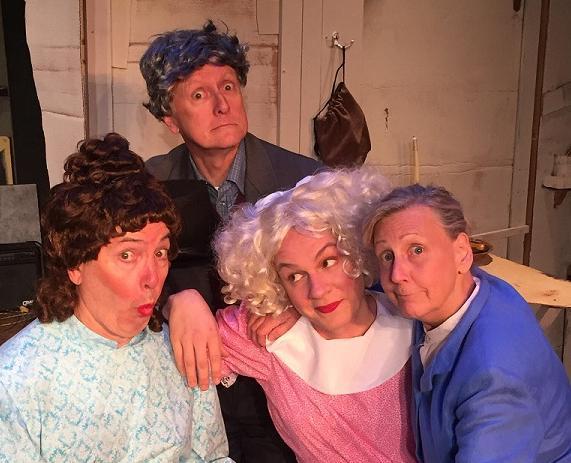 The Turn of the Scrooge

A Fairy Tale based on the story by Charles Dickens, by The Pantoloons.

Once a year the stage of the Ghent Playhouse in Ghent, New York, is taken over, almost assaulted really, by The Pantoloons, a group of actors who annually create a British-style Christmas Panto such as you might see at Covent Garden in London. They use a well-known story, anything from the “Three Little Pigs” to this year’s “A Christmas Carol,” bring it new life through political satire and human comedy, use existing songs with specially crafted lyrics and amuse us with their outrageous cross-dressing characters and inanity. Some years this is hard to take and others it is the best show around. This year’s edition, the 17th, has the company at the top of their game. This show is terrific!

Following a difficult election season with a satiric parody of real life, using a ghost story and referencing another one, should leave this company with either a hard-to-take look at real life or a slightly shallow version of what we all know to be true. Unlike other years where the jokes at the expense of politicians, local and national, are hooters, this season’s barbs are blurred by everyone’s sense of what is going on in the country. Political thrusts this time around are a bit gentle and so are easy to laugh with. They never interfere with the storyline which is one of the strongest in Panto history. Instead the comedy is more based in parody than in political satire and that is rather refreshing as we face a new Presidential administration that promises a lot of revolution — one way or another.

The cast is superb. In the more traditional roles are traditional pantoists Sally McCarthy as Ebenezer Scrooge, literature’s most impossible miser, Cathy Lee-Visscher as Tiny Tim, youngest and smallest of the Cratchit children, Paul Leyden as Jacob Marley, a ghost with a mission, Joanne Maurer as a gravedigger and other characters, Mark Schane-Leyden as both Mr. Fezziwig and the Ghost of Christmas Present, Michael Meier as Fannie and Paul Murphy as Scrooge’s housekeeper and Mrs. Cratchit.

As a newly created character, Tina Cratchit — the twin sister and former Vaudeville dancing partner of Tiny Tim — is Sam Reilly who also serves as a romantic interest. Mark Wilson in his first Panto plays the pivotal role of Bob Cratchit and also as the Ghost of Christmas Past. Nellie Rustick plays Scrooge’s nephew Fred and the company generally take on all sorts of roles on a temporary basis as needed. The costume crew must be enormous for there are some very quick changes going on backstage.

Who was best? Frankly, everybody. There wasn’t a single moment of the play which ran one hour and twenty-five minutes that didn’t reek of credibility. Not my first Scrooge play, this was a new experience as characters spoke closely similar lines to the ones Dickens wrote but rarely spoke his own complete phrases. Heavily peculiar British accents were employed by some but not all, and they not only never interfered, they enhanced the silliness on stage.

McCarthy, of course, was a stand-out as Scrooge. A good actor and singer, she seemed to take a special delight in every moment on stage, hers or other folks turns. To the main tune from “Evita” she sang her bravest “Bah Humbug” while grimacing with every other breath. As Scrooge’s beloved Fannie Meiers made the most of a big dress and a big, upper register voice. Schane-Leyden led the cast in the Fezziwig Jig which erupted off the stage and into the house. Even Jerry Herman’s “We Need a Little Christmas” made its appearance in a low moment that needed cheering up and actually got it. Songs by Harold Arlen, John Lennon, Frank Loesser, Richard Rodgers, John Williams and Ludwig van Beethoven filled out the show.

Sam Reilly’s intricate and amazing set is a show unto itself and Joanne Maurer’s hilarious costumes and wigs (she look great as a blonde) should be given a rotogravure section all their own. Isabel Filkins lit the show very well and Vivian Wachsberger’s program is a “must-read” all its own. For my money, and for yours, there is no better way to move from Turkey to the December holidays. Opening, as usual, the day after Thanksgiving and playing to sold-out houses for three weekends, this is the best event of the season — a real Christmas gift, Hannukah gelt or any other holiday’s tributes you can mention.

The Turn of the Scrooge plays through December 11 at the Ghent Playhouse, 6 Town Hall Place, Ghent, N.Y. For information and tickets, consult The Berkshire Edge calendar, call 1-800-838-3006 or go on line at ghentplayhouse.org.