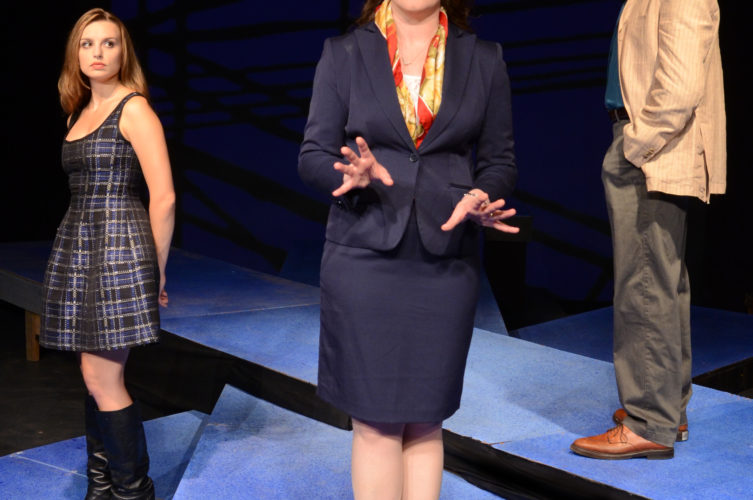 Tomorrow in the Battle

With the play “Tomorrow in the Battle,” Stageworks in Hudson, N.Y., has coined a new term – “World Premiere Revival.”

Stageworks produced Kieron Barry’s three-person play two years ago and being appalled that the work, which artistic director Laura Margolis calls a “masterpiece,” failed to get a second production they decided to remount the play themselves.

You have to make up your own mind as to whether the masterpiece label fits, but be sure of this — “Tomorrow in the Battle” is memorable, penetrating theater that will make you think and feel.

Too, you will likely agree with Stageworks that such a fine theater piece should not be neglected. Indeed, if the play doesn’t find life outside of Hudson, I’d gladly see it a third time.

Part of the problem with marketing the play might be that its seemingly simple plot line cannot adequately prepare you for the complexities that are revealed and shared. On the surface “Tomorrow in the Battle” is about a man, his wife and his mistress, all of whom seem to live privileged lives.

Making matters tougher to explain is it’s played by characters each telling their stories in direct address to the audience. Rarely do they interact with each other or even acknowledge the others presence on stage. This is often an off-putting device but Barry uses it to tell compelling stories. Indeed, if you ever you wanted to understand what a priest must feel when hearing confession this is your opportunity.

It all takes place in Great Britain. Simon (Christopher Kelly) is a brilliant surgeon who is preparing to do a heart transplant on a 5-year-old boy. His wife Anna (Danielle Skraastad) is a public servant specializing in nuclear deterrents for the Ministry of Defense. Jennifer (Olivia Gilliatt) is the public face for a financier whose success is bringing him international attention.

Each of the three is trapped by delusion. Beneath their surface success their lives are dominated by sexual fantasies. After a chance meeting at an opera, Simon begins an affair with Jennifer. Soon his obsession with their intimate moments of love-making dominates his imagination and his comfortable compartmentalized life becomes frazzled.

Anna has uncovered a secret at work that could cost her nation billions of dollars and place the country at risk. However, if made public, it makes her a whistle-blower and costs her her job. The frustration of her choice pales next to her sexual frustrations. Simon neglects her and she vividly fantasizes about one of her husband’s friends.

The young, beautiful and sexually experienced Jennifer surprises herself by her attraction to and need for Simon. What’s not clear is whether her attraction is to him or to the illusion of being a public part of his life. Jennifer’s curse is her life’s role is being a trophy companion.

When Jennifer’s business partner’s secrets are exposed and her lover rejects her, she must face the reality of her life. So must Simon when he operates on the boy after drinking too much. Anna faces her moment of truth when she testifies before a financial committee about the cost of the weapon system.

In the same way their private delusions clash with reality when the three meet at a dinner party at the home of Anna and Simon.

Exquisitely directed by Laura Margolis and penetratingly lit by Deena Pewtherer, the production is played on simple clear platforms (designed by Randall Parsons). Like the characters in the play, they can see each other but they pass without connecting.

The performances are brilliant and passionate. They use Barry’s poetic images for maximum effect and are masterful in signaling unspoken emotions.

“Tomorrow in the Battle” demonstrates that even the most controlled person has longings, commonly called needs, that can dominate and destroy a life. Who knows? It may even be a masterpiece.

“Tomorrow in the Battle” Stageworks, 41-A Cross Street, Hudson. Through August 31. 518-822-9667. stageworkshudson.org. Or consult The Berkshire Edge calendar for tickets and show times.