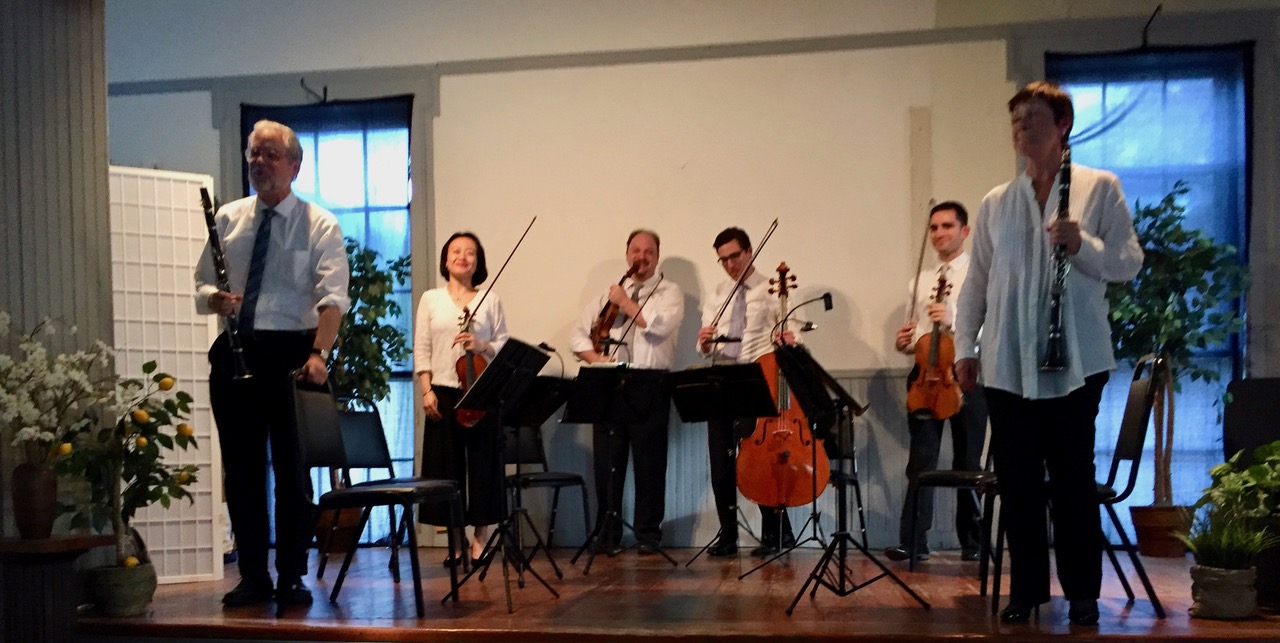 West Stockbridge — It was standing room only Friday, May 25, when Boston Symphony Orchestra members violinist Xin Ding, violist Daniel Getz, cellist Oliver Aldort and clarinetist William Hudgins joined violinist John Holland and clarinetist Catherine Hudgins on the stage in the Old Town Hall for the opening piece of their benefit concert: the spritely Rondo for Two Clarinets and Strings by Finnish composer Bernhard Henrik Crusell. The mood darkened and deepened when the four string players performed Wolfgang Amadeus Mozart’s Adagio & Fugue in C Minor, K. 546, which the composer wrote the same year he completed his last three symphonies. Aldort then addressed the audience to talk about how he was introduced to J.S. Bach’s Cello Suite #3 in C Major, BWV 1009, by a beloved teacher when he was just 7 years old and learning how to play. He said that it is his teacher “that taught [him] to love music,” a feeling that was so resonant in his performance that the audience gave him a standing ovation.

After the intermission, the Chamber Players’ artistic director Catherine Hudgins herself rearranged the next piece, Alexander Scriabin’s Romance for Horn and Piano, transcribing it for the clarinet and strings. Scriabin’s single contribution to the chamber music repertoire, this short piece is a rare glimpse into a touching and more modest side of the composer of the grandiose “Mysterium.” Holland introduced the final piece of the evening, Giuseppe Verdi’s String Quartet in E minor, explaining that the composer wrote it in Naples during a delay in rehearsals for his opera “Aida.” It, too, was the composer’s only string quartet and Verdi claimed at the time that “I don’t know whether the Quartet is beautiful or ugly, but I do know that it’s a Quartet.” The rousing performance, which seemed at times to compress the drama and emotion of an entire Verdi opera, was a testament to the piece being, in fact, entirely beautiful.

The audience and musicians gathered downstairs after the concert to mingle, talk, and enjoy refreshments and the glorious warmth of the late spring evening.