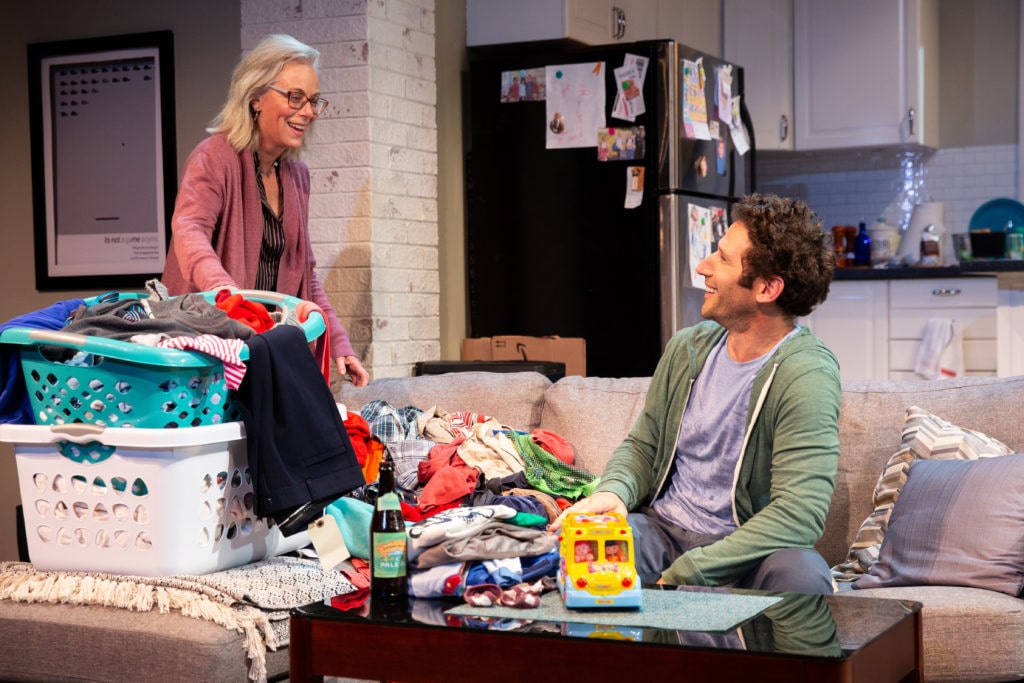 Jeremy Daniel
Jane Kaczmarek as Diana and Mark Feuerstein as Nate in the Williamstown Theatre Festival production of 'Tell Me I'm Not Crazy.' 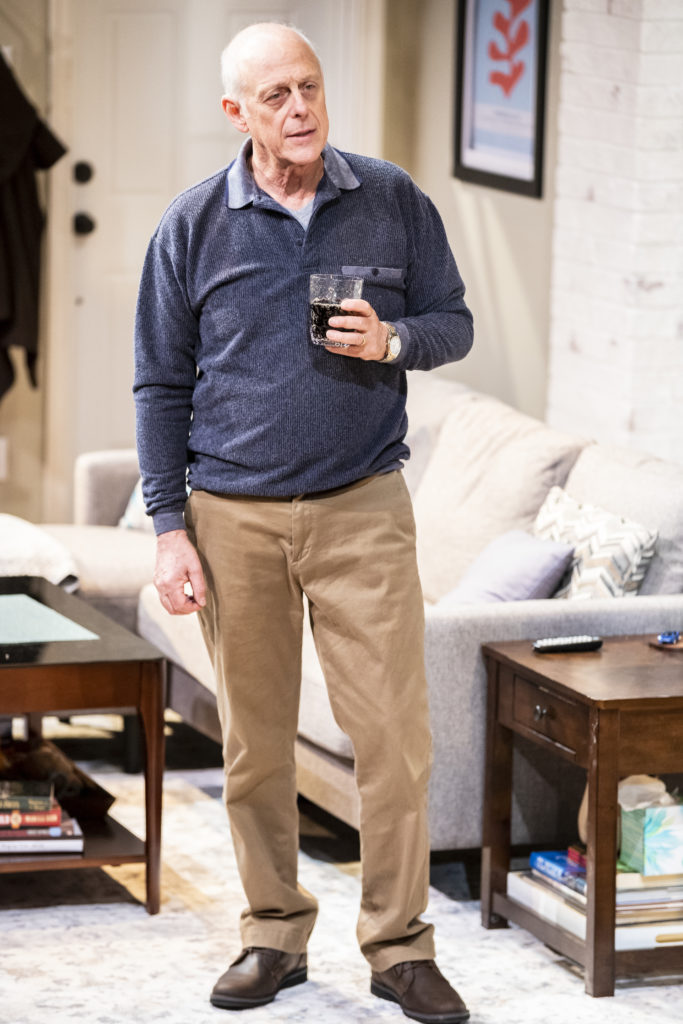 Mark Blum as Sol in the Williamstown Theatre Festival production of ‘Tell Me I’m Not Crazy.’ Photo: Joseph O’Malley

Just when it looked like Williamstown Theatre Festival had finally weaned itself off Manhattan Theatre Club-style fare, along comes Sharyn Rothstein’s “Tell Me I’m Not Crazy,” a clichéd pablum of social issues squeezed into an endless 100-minute television sitcom/melodrama format. Sixty-two-year-old Sol (Mark Blum), forced into retirement after a lifetime on the job, buys a gun to protect his condo unit from a spate of robberies. The gun offends the liberal sensitivities of his 60-year-old schoolteacher wife, Diana (Jane Kaczmarek). Sol and Diana’s son, Nate (Mark Feuerstein), a struggling photographic artist and stay-at-home dad, and Latina wife Alisa (Nicole Villamil), a fast-rising account exec at a big advertising firm, refuse to allow them to babysit the grandchildren, a 6-month-old and a 3-year-old with behavioral issues, at their condo with a gun on the premises. 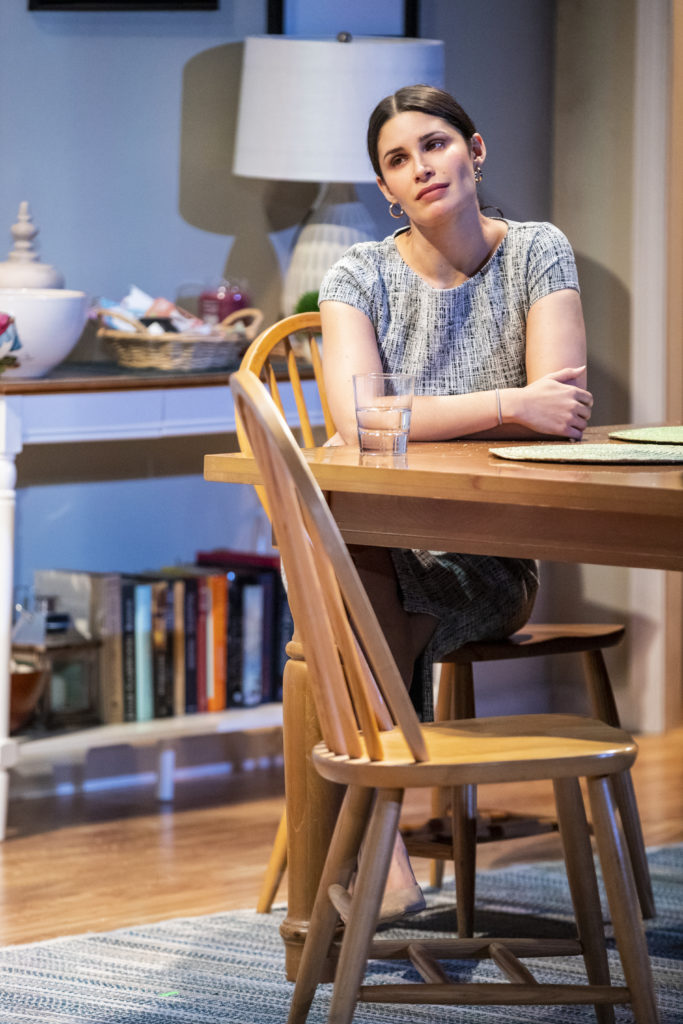 Nicole Villamil as Alisa in the Williamstown Theatre Festival production of ‘Tell Me I’m Not Crazy.’ Photo: Joseph O’Malley

A kitchen sink of familiar, predictable White People Problems ensues. Can Sol rise above his feelings of disenfranchisement after a lifetime of hard work? Can Diana overcome her feelings of generational resentment to her daughter-in-law who wants it all, career and motherhood both? Will Nate be able to emotionally sustain his support for Diana’s career while putting his on the back burner? Is there artistic fulfillment in changing diapers? Will Alisa overcome her feelings of insecurity about being a minority and female trophy for the company she works for? Will she be able to pump enough breast milk and still take the big job in another city away from home? When it comes to a problem child, should old-fashioned values about child-rearing supersede daycare facility diagnostics?

The force-fed sitcom humor is never really amusing, and often groan-inducing or offensive. Diane dismisses concerns that Sol’s bad aim could fire a stray bullet on an annoying neighbor with the quip that it would “bounce off her Botox” anyway. Try that one on a Sandy Hook parent. Later, when Sol does get off a shot, mistakenly thinking robbers were afoot, he accidentally shoots that neighbor’s dog. Would that make Tamar Rice’s mother feel better?

Ms. Kaczmarek, who spent years as the mom on the series “Malcolm in the Middle,” and Mr. Feuerstein, who was a regular on the long-running “Royal Pains,” roll with the hackneyed script better than Mr. Blum or Ms. Villamil perhaps because they’re so familiar with this kind of material. “Tell Me I’m Not Crazy” concludes like a standard sitcom: rather cutesy. Had I happened on the likes of this story on television, I would have grabbed the remote and changed the channel. I’d never expect to find it on Williamstown’s Nikos Stage.

Tell Me I’m Not Crazy plays on the Nikos Stage at the Williamstown Theatre Festival’s ‘62 Center for Theater and Dance, 1000 Main St., Williamstown, Massachusetts, through Saturday, Aug. 3. For information and tickets, see the Berkshire Edge calendar, call the box office at (413) 458-3253 or go to wtfestival.org.