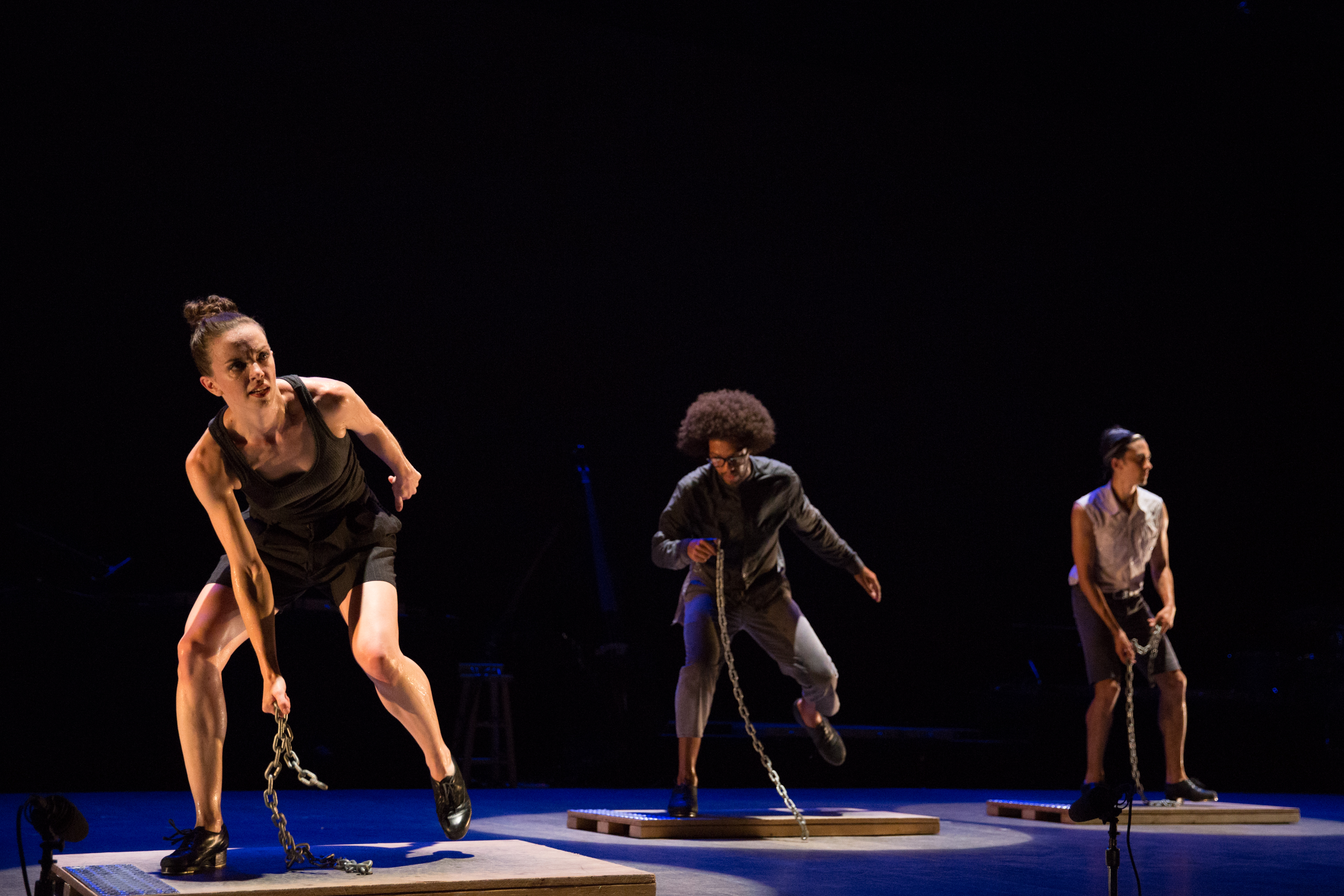 Becket — Since 2014, when Michelle Dorrance and her inspired company presented the premiere of ETM: The Initial Approach, she and her principal collaborator, Nicholas Van Young, have expanded and deepened their mix of traditional tap, modern dance, sidewalk breakdance, and electronic music.

In ETM: Double Down (the title is a transformation of the concept of Electronic Dance Music [EDM} to Electronic Tap Music), the musical palette has broadened to include a gospel singer, a drummer, a bass guitar player who doubles on plucked and bowed stand-up bass; a whole new set of small and large platform/transducers that transform tap impulses to a kaleidoscopic array of pitches, clunks, whistles, and thunderous bass-drum hits; synthesizers that organize and integrate overlapping sound loops, which in turn become swinging riffs to propel the dance; and buttons and wands and Nintendo Wii clickers that increase the volume to shattering heights and nearly inaudible lows.

That tap is about sound was emphasized by the casual, muted dress of the performers. Their feet are their instruments. Dorrance Dance pushes the possibilities of their instruments through manipulation of surfaces, the ways that sounds are transmitted and reproduced, and by expanding the dancers’ voices with new elements, creating rich, vibrating, living ensembles of sound.

Tap also tells a story about race, power, emotion, and adaptation, which comes about through ingenuity and hybridization, stretching the envelope of the art to incorporate new elements, and creating an evolving, elastic, vigorous organism.

Dorrance’s and Young’s choreography, along with the cast of dancer-musicians, witnessed in live performance, also dive deeper into the vitality of evolution and hybridization by improvising, and integrating emotionally and conceptually new rhythms and dance forms. Here are a few thrilling examples:

During the past two years, Michelle Dorrance has collected many honors including a MacArthur “genius” award (the first given to a tap dancer) and national and international choreographic and dance acknowledgments.

Suzanne Carbonneau, a Scholar in Residence at the Pillow, offered this information as well as much insight into the history of tap in an excellent pre-performance talk. Regarding the Dorrance oeuvre, she noted the many accomplishments that have grown from Dorrance’s Pillow residencies, and the special meaning of Dorrance’s 2013 Jacob’s Pillow Award.

Professor Carbonneau noted how Brian Siebert, the NY Times dance reviewer, praised her rapturously. He wrote the words below of her daring performance at the Pillow in 2013. These qualities were richly in evidence in this performance, both in her Dorrance’s dancing and in the sensibilities that came across in her choreography.

“A twisty, crossover step with clasped hands called the Suzy Q took on a desperate quality, and legs slid open along the floor suddenly with a new and striking sexual frankness. . . Seeing this in a program with the same steps, executed in a traditional manner in a traditional context, clarifies Ms. Dorrance’s unusual talent of laying bare hidden emotions in the technique of tap. Pivoting her knees and ankles, she exploits the awkwardness in her own gangly body to give visual expression to zones of feeling that in tap are usually expressed only musically.”

Principal dancer/choreographer Nicholas Van Young literally magnified the Dorrance Dance synthesis in his inventive employment of the show’s array of transducers and operating instruments. He created them! Young’s astute manipulations of tone and timbre in performance matched his jaw-dropping tap dance improvisations. They drew on a wide range of cultural traditions and gestures.

Seibert of the Times observed, “. . . But the height of virtuosity came in a late body-percussion solo by Nicholas Young. Snapping, clapping, stomping, and clicking his tongue, Mr. Young played the church with his body, a one-man band juggling two or three rhythms at once, developing a sophisticated composition within Ms. Dorrance’s.”

All these NY Times references piqued the curiosity of your reviewers. Eli recalled reading in the July 16, 2016, number of The Times Literary Supplement a review entitled, “Dancing feats: Cultural histories of an American Art Form,” by Kathleen Riley, a classical scholar and theater historian (p.5).

Her discerning thoughts on Brian Seibert’s research and writing in What the Eye Hears: A history of tap dancing (Farrar, Straus, and Giroux, 2015) seem especially pertinent to what the Dorrance troupe endeavors to accomplish:

“His dynamism as a storyteller, his deceptively breezy hep-to-that style of inquiry are sometimes submerged by his obsessive diligence as an archivist and genealogist. This structural flaw stems from a noble desire to rescue individual tap dancers from obscurity and to celebrate “the whole motley family tree” . . .

“(The) leitmotif is hybridity – the practice of stealing steps and making them new – and that is what Seibert is eager to document. He rejoices in tap’s, and America’s, mongrel magnificence while fully acknowledging that some dancers and choreographers, usually based on color and gender, have emerged from the melting pot a lot better credited than others.

“‘Syncopation is the soul of every American,’ declared Irving Berlin and, as Seibert delights in pointing out…

“In tracing the evolution of tap, Seibert chronicles, as far as possible, the collisions aboard British slave ships between African rhythms and Anglo-Irish hornpipes and jigs; the ‘crucibles of convergence’ that were the Negro dancing cellars in Manhattan’s Five Points district, the poorest part of town with large black and Irish populations; minstrelsy’s role in making theatrical tap out of jigs, juba, shuffles, and breakdowns.

“From there he scrutinizes tap as agon, as narrative, as pure sound, tap as instrument of protest and autarkic proclamation. He profiles a dazzling array of great black male tap dancers – Robinson, John Bubbles, ‘Peg Leg’ Bates, Baby Laurence, Jimmy Slyde, Honi Coles, Gregory Hines – but he gives due attention to the young white female dances – Brenda Bufalino, Jan Goldberg, Camden Richmond, Gail Conrad – who led a tap renaissance in the 1970’s, learning from and looking after the art’s black elders. . .

“He also offers a balanced appreciation of tap’s new messiah, Savion Glover, paying tribute to his considerable gifts but making no bones about the self-righteous, revisionist gospel Glover preached in Bring in ‘da Noise, Bring in ‘da Funk with its disfiguring omissions of whites and women from tap’s history and its reduction of Robinson’s memory to a mercenary Uncle Tom, a race traitor.

“(While) Glover reconnected tap to the music of the young, he ignored its hybridity, the sharing as well as the stealing of steps. Seibert takes measured swipes, too, at Tap Dogs and Riverdance, shows that became industries of global commodities but did not represent great leaps forward in the art of tap. The one, for all its macho bluster, was conservative and derivative, the other rhythmically narrow and danced to prerecorded taps. . . (!)

“But Brian Siebert remains hopeful. . .(He) ends on an implicit note of proleptic nostalgia, a nostalgia for ‘that place,’ as the former US Poet Laureate Billy Collins has it, where people are doing a dance we cannot imagine/a dance whose name we can only guess.

The vocalist, Aaron Marcellus, whose falsetto extends to a G at top of the piano keyboard, and whose Gospel spiritual melismas send shivers up the spine, also performed fundamental rhythms with his shoes on the amplified platform from which he sang. His profound comprehension of African-American vocal traditions glowed in his gorgeous improvising. Truth be told, in a curious forum for this art, the final round of American Idol, Marcellus received a standing ovation from the judges. In addition to his singing, Marcellus is both an actor and teacher.

Standup and electric bass player, Gregory Richardson, brought to this performance a solid, swinging rhythmic foundation, which enabled his colleagues’ overlaying syncopations. His sense of joyous mutuality manifested in robust, kinesthetic counterpoint, brilliant bass lines, double-times, half-times, and bowed and plucked accents and anticipations. A composer and creative force in his own right, Richardson’s full-length collaboration with dancer/choreographer, Leonardo Sandoval, Music from the Sole, saw its premiere to a sold-out performance at The Creative Alliance in Baltimore in 2015.

Siobhan Blake of the NY Times gave a positive appraisal of their appearance at the 2015 American Tap Dance Foundation Showcase at the 92nd Street Y in Manhattan: “Though philosophical in its intention, MidBloom remained a neatly wrapped routine, a dance lasting the length of a pop song. Mr. Sandoval, arriving next as if blown in from the wings, had a . . . spontaneous aura of thinking on his feet as he riffed off the bassist Greg Richardson’s Afro-Brazilian sounds, played live. This smooth solo and the rousing group piece that followed were excerpts from his new show, “Music From the Sole,” created with Mr. Richardson. When will New York get to see the whole thing?

When you see this duo in street performance, as shown in the video below, you can grasp the significance of public engagement in the history and practice of tap.

Born in São Paulo State, Brazil, Leonardo Sandoval started dance lessons at age six. At 18, he was invited to Los Angeles to study and participate in the L.A. Tap Festival. To bring tap dance to a wider audience in Brazil, he co-founded the Cia Carioca de Sapateado in Rio de Janeiro, with the express intention to integrate Brazilian dance styles and rhythms into tap. This comes across splendidly in the following 2011 Brazilian television clip of Sandoval in street performance. His work goes both to Brian Siebert’s notion of hybridity, and to Michelle Dorrance’s reaching toward a synthesis of tap traditions.

Note particularly how Sandoval’s judicious handclaps float a samba rhythm, and the response of the Brazilian sidewalk crowd. You can’t script this stuff! The performance begins at 2:25, after an interview in Portuguese.

Chrome-plated, heavy chains, recycled from ETM: The Initial Approach, conveyed a symbolical break from subjugation and a distinctive, angry growl. Toward the end, the whole ensemble dropped them in unison, magnifying ferocious downbeats that rammed home the message.

A magical rectangular surface passed among the dancers. It became both a visual air guitar and a source of myriad electronic bells and whistles. Musical moods shifted instantly but never randomly. All the devices appeared to array the electronic sounds in support of the narrative.

When, for example, men punching the air with their fists surrounded Michelle Dorrance each arm extension was accompanied by a pounding thump. When she slowly approached a male dancer and bent her head to his shoulder in a moving evocation of affection and need, the near-silence was palpable.

Warren Craft executed a teetering, backward fall from a low platform, landing hard on his arm. No syncopation here, just a rumble. Had he not tripped, and hurt himself? But we felt his pain. Craft retreated to stage rear and massaged his left hand. Life lesson learned: old folks, don’t be embarrassed to put on your crampons next winter in the Berkshires!

The delicious story of the white square facing off with the hip African-American, the established against the upstart, was portrayed respectively by ticky-tacky, strait-postured dancing percussion and hard-swinging jive. It was a tricky proposition, this negotiation between ballroom formality and white privilege and the ethnic guts of the tap tradition. Pushing and angry confrontation were subordinated in the end to an uneasy but friendly reconciliation. As Rodney King put it so eloquently, “People, I just want to say, can’t we all just get along?” In tap, arguably, yes.

Human vulnerability and struggle notwithstanding, the prevailing mood at the end of this show was of optimism and faith in the redemptive power of searching, inspired dancing. If only the world were observing and participating, Michelle Dorrance and her colleagues appeared to be saying, healing begins here.