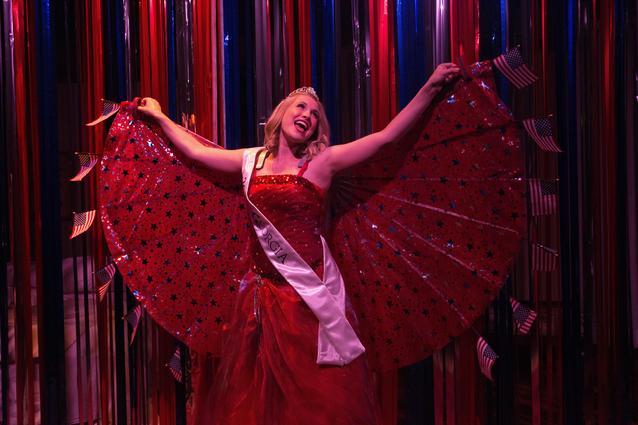 The opening play at Shakespeare and Company in Lenox, Massachusetts, is also the opening salvo for an election year of entertainment NOT mentioning the presumptive Republican nominee. For that alone I would be grateful. However, the play, “The Taming,” by Lauren Gunderson is also a funny, fundamentally sound and sane look at the insanity of American politics in this and other centuries. Written for three women and produced by a company that has always featured strong, vital actresses, the show introduces three players who are making their company debuts in this work.

The basic premise here is that a Miss America candidate, actually a finalist, can exploit the American male ego and at the same time explode the American political system to create an entirely new format for democracy through constitutional law. To some people reading this the plot may not seem funny; for others it may appear ridiculous; the truth of the matter is that this is a sound proposition played for both laughs and emotional gravity. The playwright has created a world that already exists, peopled it with three essentially accurate depictions of types that exist and combined it with a Jean-Paul Sartre premise that creates permutations of relationships that foster action and acquiescence in equal measure. What fun!

After a proper introduction to each of the three characters, establishing their differences and their assumed strengths, two of them find themselves locked in a room with no exit, no phones and less clothing than they started with. It is their responsibility to come to some sort of understanding about one another’s values and value. The intended outcome of this forced meeting becomes clear when the third woman enters the picture. To say that the shocking event is enthralling is saying little, for as much as the two captive women find the premise appalling and undoable, they and we are as intrigued as possible.

The second “act” (this play, at just over ninety minutes is played without an intermission) takes us back to 1787 when James Madison was drafting both the Constitution and the Bill of Rights under George Washington’s watchful eye. Our three heroines assume roles as unanticipated as their modern situation and the play takes a turn into the hilarity of farce. I cannot recall having such a good time with a political diatribe in my long and involved life, not even when working, years and years ago, for Bella Abzug back in New York City.

Maddie Jo Landers plays Katherine, Miss Georgia, the Constitutional Law graduate, whose ambition is to be the most successful pageant queen and political power in the country. Her slender, blonde figure is not exactly a new political secret for someone else with a thirst for power presents a similar, if older, image to us today. Landers plays the beauty queen perfectly and every time she speaks to her topic she alters our view of her. She is a chameleon on stage, altering to the roles required with simple poise — quite the pageant queen in fact — and bringing an honesty to her 18th century parts that make us laugh even harder than we have before. Here we have a very talented actress able to make real what is patently unreal. She is a treasure.

Tangela Large undertakes the dark role of a Senatorial manipulator whose interest in power plays into the goals of others. Large is big on bluster and blasts through falsehoods with bombastic skill and beautiful diction. I could listen to this actress on any topic and, in fact, did so for the evening with relish and pleasure. She brings to her role a unique sexuality, a quality that allows her to assume any role in any relationship regardless of gender or influence or even interest. To watch Tricia unwind, rewind and tighten her springboard of intentions is worth the price of the ticket. Large makes her work here an essential part of the fabric of political disruption.

As her counterpart, or counterpoint, in the social strata of political rhetoric, Lucy Lavery plays Bianca for every abrupt and abusive possibility open to such a character. Bianca is a woman with secrets who shouts her intent constantly and reveals little until she is compelled to, or caught in, her manufactured lies. She is a blogger-journalist with a mission and her mission is reflected in her 18th century character as well. When her world begins to crumble this character becomes the funniest of all and Lavery plays this transition with marvelous physical transformations.

Under the clearly clinical guidance of director Nicole Ricciardi, this trio of players maintains a dynamic range of highly specific movements, vocal work and interactions as they learn to “lead with greed, baby.” That this play works so very well is due in no small part to the absolute control the director has maintained over her actors. The set by John McDermott is excellent and the costumes by Esther Van Eek are delectable. James Bilnoski has designed lighting for this play that works for both time periods while Amy Altadonna’s sound design keeps us aware of the world outside and the changes in our perception.

I don’t usually say this so early in the summer season, but given the opportunity I would gladly revisit this play for a second chance to catch a glimpse of these people in their situation. I had that good a time.

The Taming plays at Shakespeare & Co. in the Elayne P. Bernstein Theatre, located at 70 Kemble Street in Lenox, Mass., through July 30, 2016.  For information and tickets, consult the Berkshire Edge calendar, visit shakespeare.org or call the box office at 413-637-3353.