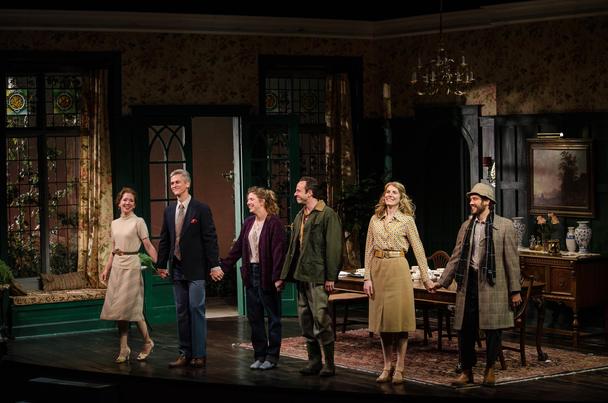 “That’s how the corn flakes.”

Comedy isn’t easy and satire is even worse. Luckily, at the Dorset Theatre Festival, Alan Ayckbourn’s “The Norman Conquests” provides plenty of the former and a swipe of the latter and, when approached with the courage that the material will work, it will work. At the Dorset Theatre Festival, director Evan Yionoulis shows us what trusting the material can do for a play: it works, it works, it works. Ayckbourn is satirically attacking the family dynamic and doing so with that rare combination of talents including sophisticated wit, common humor, and sensitivity to the misfortunes of the tongue-tied. Play Number One in the trilogy has now been brought to life with a terrific eye on the horizon and a strong hand on the throttle.

It has been almost two months since Northern Stage in White River Junction started the cycle with the second play, “Living Together,” which introduced audiences in Vermont to this group of six people joined together (except for two of them) in sibling rivalry and marriages. Reg and his two sisters, Ruth and Annie, are each burdened with spouses who do not suit them. Reg – a hearty, laughter-filled, good fellow – is married to the controlling and martial mother of two, Sarah. Ruth has the open marriage from hell with Norman, an assistant librarian, while she struggles to balance career and a personal life that includes not wearing her much-needed glasses. Annie lives at home to take care of their mother and she is being wooed in a non-intense, non-forceful or -dynamic, non-effective manner by the local veterinarian, Tom. When Annie agrees to go away for a “weekend” with Norman, local fans are instantly hit with flying excrement. Circumstances, however, prevent this journey and the entire clan ends up down at the manse with Mama upstairs having her own special needs met by a reluctant throng.

This play (these can be played as individual pieces and not ganged as they are in Vermont this season) takes place in the dining room. Everything in the four scenes is centered on the table and the potential for a meal. The first outing of the year took place rather simultaneously in the lounge and the third play, still to come at the Weston Playhouse in July, takes place in the garden. This project shares designers and cast.

The set has been designed by David L. Arseneau and it is a fabulous room dominated by a spectacular table. As in the previous outing, the room has enormous windows, a solidity that defies challenges, and a certain definition that makes it almost too real. The action within it is highlighted by the subtle and specific design of lighting designer Stuart Duke. Duke does magic with specific times of day and the relationship between indoors and the garden beyond. Charles Schoonmaker has provided the six players with the ideal costumes to define their characters.

Jenni Putney is Annie, the unmarried sister with the responsibility for their mother. Behind her tomboyish persona, there is a hungry woman she reveals occasionally. Her interpretation of the role is both charming and effective. Her sister, Ruth, is played by the slender and lanky Ashton Heyl. They make a remarkable duo, so like and yet so unlike one another in movement, appearance, and style. Heyl is deliciously silly as the half-blind woman struggling to identify milk from water.

These women have two men in common: their brother, Reg, and Ruth’s husband, Norman. Reg is played by Mark Light-Orr. In this play, the man is defined by a silly laugh, a decency that is ridiculed by his wife, and a certain tall-person movement which is echoed by Ruth. Light-Orr’s interpretation is based on a devotion to the proper clothing, a devotion which is mostly ignored and unspoken, but which clarifies the man completely. Clothing, on the other hand, means nothing to Norman who would probably be more comfortable without any at all. Richard Gallagher plays the man for all the minor values he contains. His sad sense of humor is made too unappealing to be true and, in the oddest way, Gallagher makes the man devastatingly appealing for all that negativity. His Norman is accessible. His Norman is prepared for everything and he is surprisingly the top of the family food chain, dominant without being dominating.

The two outsiders who cannot make things over in their own images are Sarah, Reg’s wife, and Tom, the veterinarian next-door. It is clear in this work that they are devoted to their loved ones yet helpless to have an effect upon them. Sarah is controlling and difficult as played by Caitlin Clouthier. She conceives as her personal roost any room she occupies. She takes over each situation with a personal authority that Clouthier works with an obvious relish that splashes as she smashes down to earth unsuccessful in her attempts to create order out of the natural chaos around her. Her strong serious playing is all the funnier for her utter reality. Like her, David Mason brings to the tongue-tied Tom a clear vision of the tortured imbalance of a man who knows what he wants and cannot make it clear to anyone, including himself. Mason is brilliant here. He shines from the corner of a room, or from the chair with the sawed-off legs. He knows how to make a lack of words speak pages and pages in folio size.

The sextet of players has created a perfection in this play that works for them all; familiarity breeds reality. They have, of course, already been playing these same part in another play since the beginning of April, so they have developed their inner rhythms and sensitivities. This funny play will give way, next month, to the third play and that, if “Table Manners” is any indication, should be hilarious.

See this one now and enjoy the next installment later. If you missed Part One, well, it’s gone, but you can still catch up with the basics. Ayckbourn has managed to fill in the blanks he created. And, in this play, there are truly funny lines to bring you along in this dysfunctional family’s interplay. You can’t expect more than that, after all.

Table Manners plays at the Dorset Theatre Festival through Saturday, July 2. For tickets and information, see the Berkshire Edge calendar, call the box office at (802) 867-2223, or go on line at dorsettheatrefestival.org.