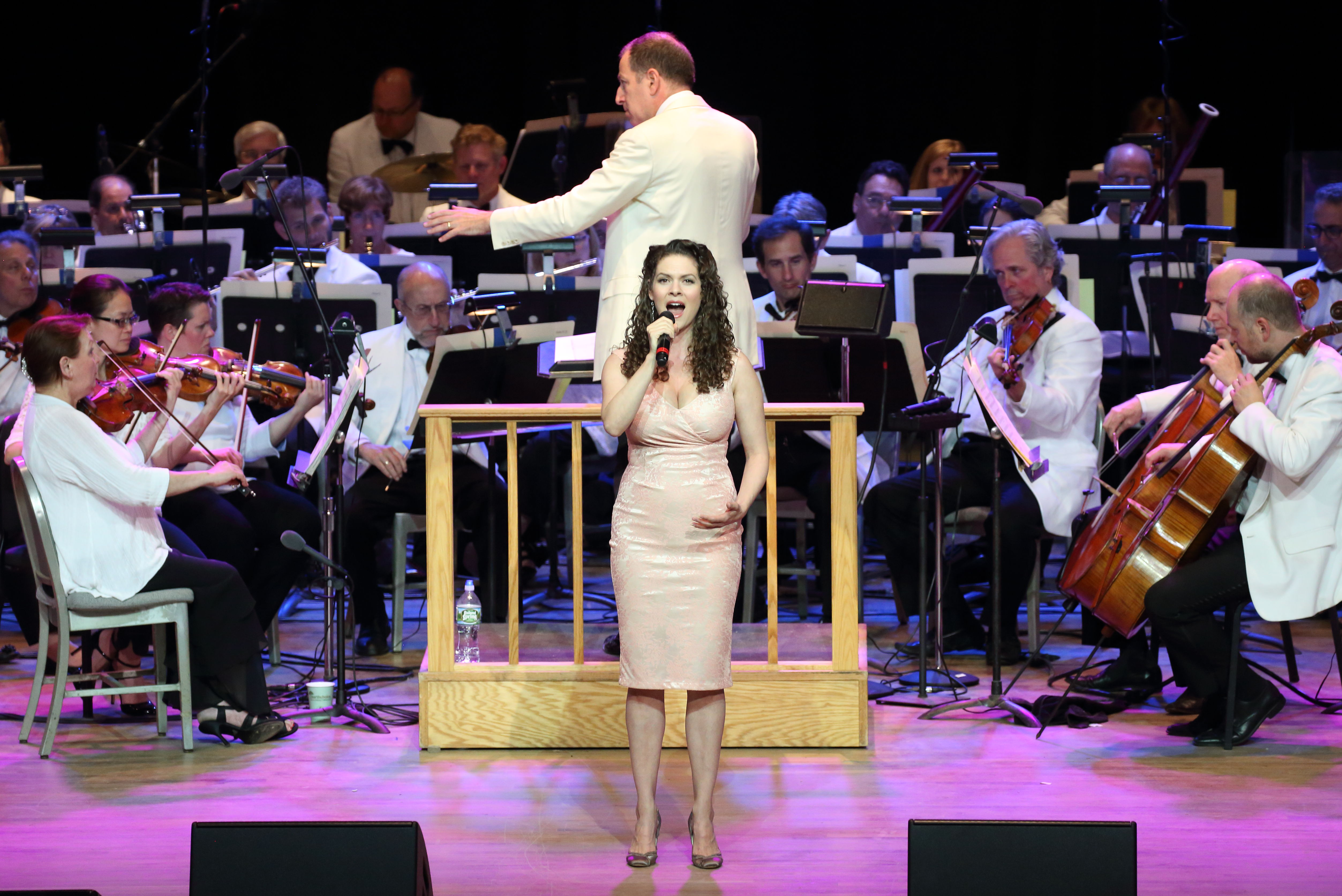 Lenox — On the afternoon of Sunday, June 25, as conductor Ted Sperling  and the Boston Pops Esplanade Orchestra sent the first strains of “The Sound of Music” wafting through the Shed, across Tanglewood’s great lawn, and out over Stockbridge Bowl’s vast landscape of lakes, hills, and pastures, a hush fell over the crowd. Seconds later, as soprano Laura Griffith announced “The hills are alive . . . “ in a voice so sweet and pure it could break your heart, those in the audience who grew up with Rodgers and Hammerstein’s music began to see their lives passing before them. Because, for innumerable listeners, these songs conjure up a lifetime of memories. Sunday’s program, “Something Wonderful! Celebrating the Songs of Rodgers and Hammerstein” was just for them.

Boston Pops music director Keith Lockhart’s virtual rolodex includes the names of all his favorite theatrical music directors. Ted Sperling is foremost among them. Mr. Sperling has worked with the finest singers in musical theater. For Sunday’s show, he engaged four of his favorites:

These four young musical-theater veterans have it all: superb vocal control in all registers, excellent acting skills, poise, good looks, and good taste. Not to mention superb vocal control in all registers. Being consummate actors, they stay perfectly in character throughout every performance, even during long stretches with no singing or speaking. Their characters never leave the stage.

Julie Andrews immortalized “The Sound of Music” in 1965. On a Sunday afternoon in 2017, it was anybody’s guess whether Ms. Griffith’s performance of the song could possibly measure up to Andrews,’ but all guesswork ended within the first four measures.

Laura Griffith doesn’t sound like Julie Andrews. She sounds like a person singing this material exactly as it was meant to be sung: with perfect tone, perfect diction, perfect intonation, perfect phrasing, perfect everything. And a well developed sense of style.

It was the same story with Whitney Bashor. Her first number, “I Have Confidence,” gave the audience their last opportunity to make the Julie Andrews comparison. Once again, the comparison was manifestly irrelevant, because Ms. Bashor simply nailed the song on her own terms. Her gripping, emotionally vivid interpretation of “Hello, Young Lovers” from “The King and I” was likewise definitive. On “I Cain’t Say No” from “Oklahoma!” she was hilarious, endearing, a bit naughty, and utterly spot-on.

Every note that Laura Griffith and Whitney Bashor sang on Sunday was in all respects pleasing to the ear. Which is to say, their soprano voices were never shrill or wobbly. Youth may often be wasted on the young. But not in the case of these two.

Ben Davis and Andrew Samonsky each brought years of acting and musical theater experience to the Shed stage on Sunday. Ben Davis has played Curly in “Oklahoma!” and Emile in “South Pacific.” He recently starred as Captain Von Trapp in a touring production of “The Sound of Music,” so he was perfectly at home singing the deceptively simple “Edelweiss,” executing it with all of the finesse the song demands.

Andrew Samonsky’s first number on Sunday was “Soliloquy” from “Carousel.” While his performance recognized the song’s moments of gentle levity, it also was touching and unexpectedly compelling. (It takes an actor.) Selections from “The King and I,” and “Oklahoma!” received comparable treatment, but nothing could beat his duet with Ben Davis on “There Is Nothing Like a Dame” from “South Pacific.” The crowd was ready for it, or so they thought, but this performance was stronger than anyone could have expected. Roars of approval followed.

Great songs made Sunday’s show a deeply satisfying listening experience. But great musicianship made it spectacular.

You can, of course, hear world-class musical theater any day of the week in New York City. But not with the Boston Pops Orchestra in the pit. And certainly not in the middle of a bucolic paradise. For that, you’ll have to go to Tanglewood.