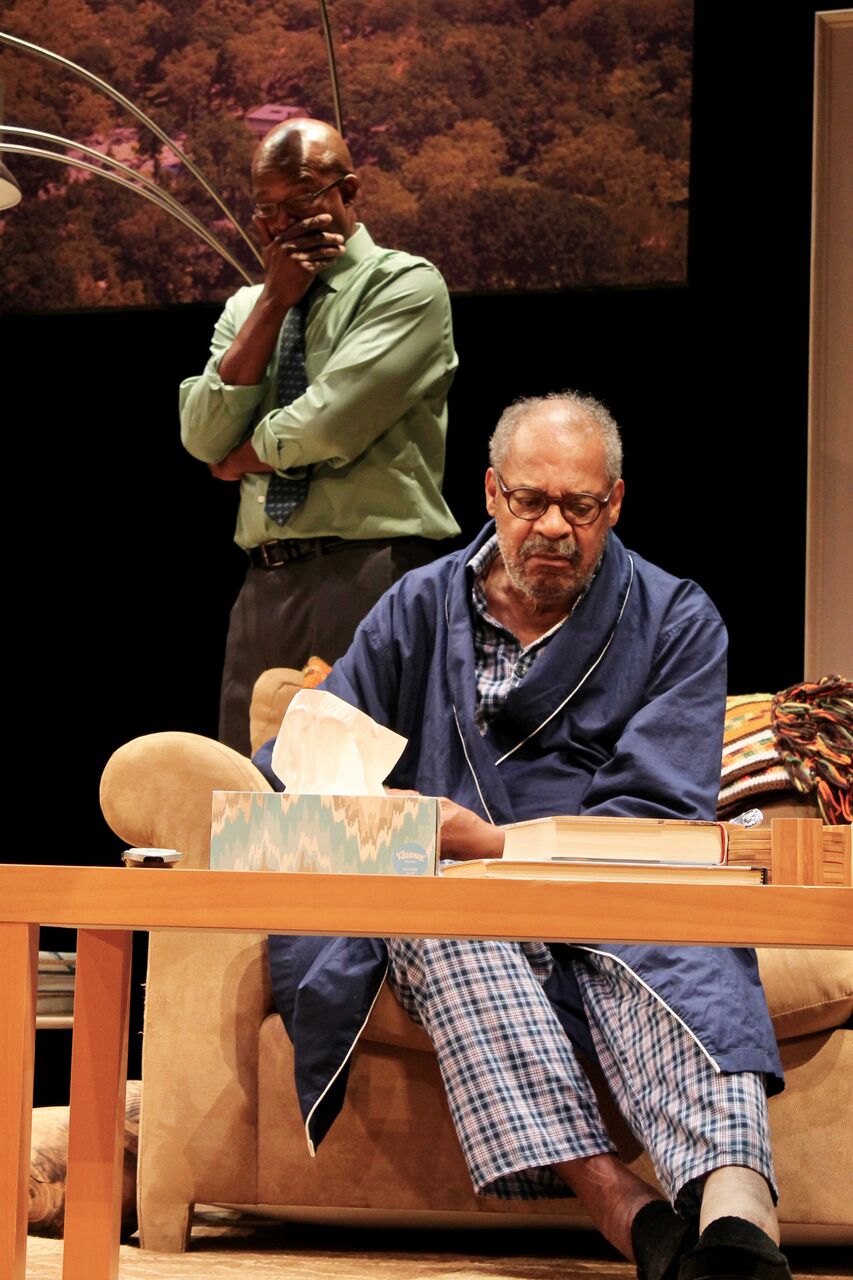 The premise of this beautifully rendered, economically composed two-hander is straightforward. Calvin Jones, a handsome, hip, coolly-intellectual, affluent, widowed African-American college professor moves his ailing 82-year-old, widowed, outspoken father, Donald, from poor, rural Mississippi to his fashionable Harlem penthouse. Playwright Tyler doesn’t waste any time in expositional niceties. Donald doesn’t want to be there: his cantankerous mood is evident from the start. (And anyone who’s ever moved an ailing parent from their lifelong home can immediately identify with the set-up.)

The first 20 minutes or so of this 90-minute one act are hugely entertaining, often downright funny. There’s an argument about whether Donald’s garishly-colored African folk art blanket “goes” in Calvin’s chic, monochromatic décor. (The multi-tiered set by Carl Sprague is both visually stunning and spatially structured for director Joe Cacaci to get optimal movement from the cast of two). There’s some ODD COUPLE-ish hilarity, even, when Donald staring down at a breakfast bowl of organic fruit and yogurt prepared by Calvin scowls “I aint eaten’ this shit” bemoaning the loss of his morning grits and slab bacon.

Donald’s grumpiness is peppered with disturbing outbursts. Inching forward in the story comes the past, informed by growing up Black and poor in the South. Donald is still wary that he isn’t seen by his gifted, accomplished son as being good enough. And Calvin still resents Donald as being a self-righteous, hard-ass of a parent. It’s ground that’s been covered by Arthur Miller and his ilk before, but it’s never derivative in Tyler’s hands.

Father-son strife escalates when their generational conflict gets lensed through civil rights. Calvin’s penthouse seems more than just one generation away from separate water fountains and the back of the bus, dramatized movingly when Donald describes the lynching he observed as a young man in the South. Is this fancy Manhattan apartment really what Donald and his generation marched in Selma for? But the gap that divides Donald and Calvin’s isn’t really political or class. It would be unfair here to detail what their mutual resentment is really about. Suffice to say that SOME OLD BLACK MAN frames racial prejudice with a bold probity rarely confronted and dramatized.

Leon Addison Brown as son Calvin and Roger Robinson as father Donald, both with impressive Broadway credentials, couldn’t be better. Brown’s is a multi-layered challenge: he carries the pain of recent widowhood and the insecurities of a son who’s become more “successful” than his father. Mr. Robinson, who won a Tony Award for JOE TURNER’S COME AND GONE, is a complex man, too, full of emotions unexpressed and angry memories made more acute by his mounting infirmities. His physical movement – staggering, stooping, and sometimes near-collapsing — is impeccably timed.

SOME OLD BLACK MAN acknowledges the political past in a unique way, but never waivers from being a deeply moving, personal tale of father-son reconciliation. And that’s what makes it such engrossing drama. There should be more new plays as fine as this.

Some Old Black Man is playing at Saint James Place in Great Barrington, Massachusetts, with performances Thursdays–Sundays through August 27. Tickets are $30-35 and group tickets are available. For information on how to purchase tickets, see the Berkshire Edge calendar or Berkshire Playwrights Lab.