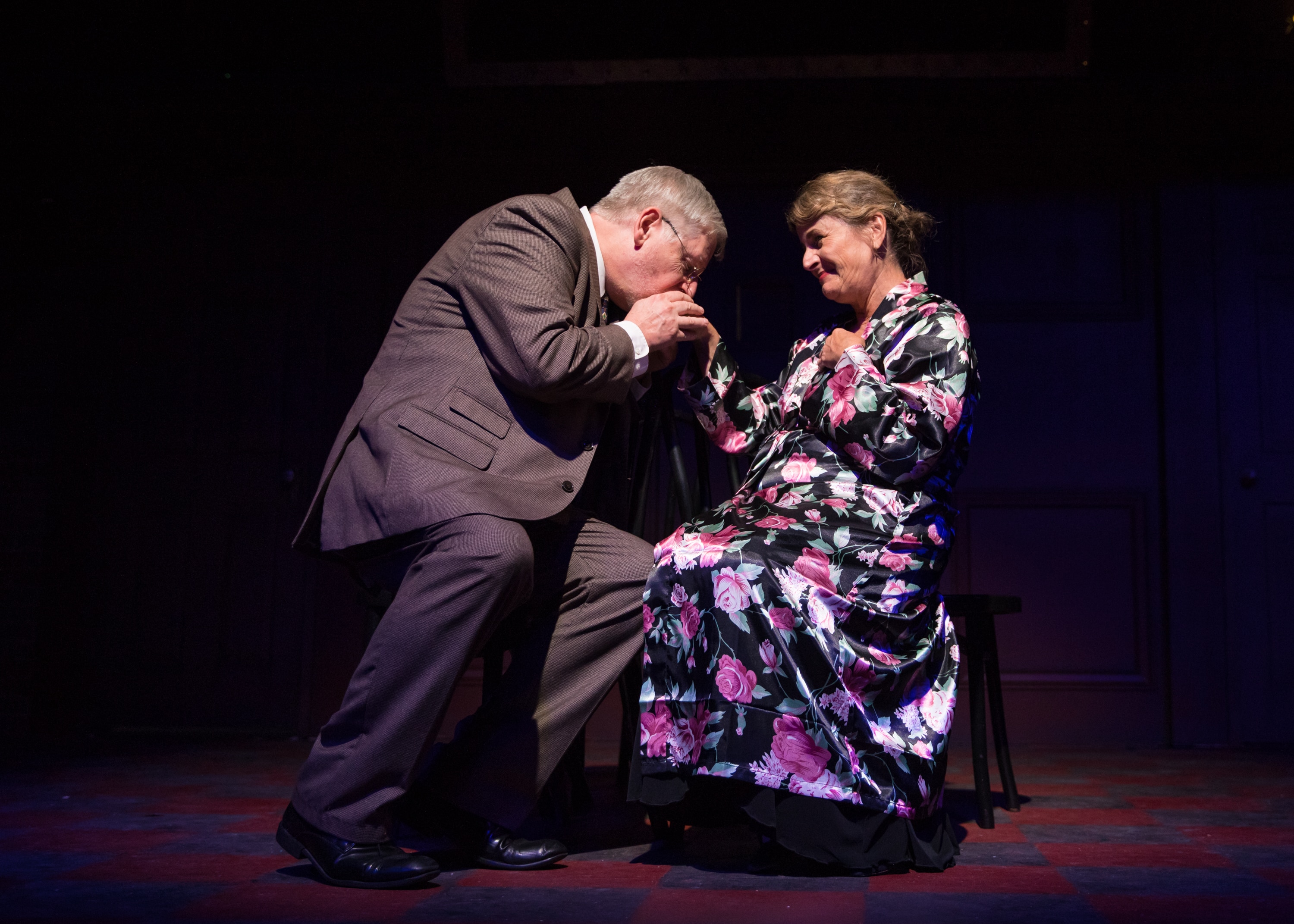 If what you know about “Cabaret” is informed by the classic 1972 movie that made Liza Minnelli a superstar, you owe yourself to see the Tony Award-winning musical stage version like the one at community-based Sherman Playhouse. Director Bradford Blake, inspired by London’s Donmar Warehouse 1993 revival that made it to Studio 54 in 1998, creates a solid, engaging production that is both faithful to the cautionary theme of the original Broadway production and authentic to the raw and seedy world of the decadent Kit Kat Klub of 1931 Berlin.

Eschewing Broadway glitz, director Blake relies on a minimalist set — a three-door backdrop, seven chairs and a few props. The Sherman Players’ show is an ambitious production with a large, non-Equity cast of 15 and a Kit Kat Band of seven on the upper tier of the small stage in a structure that was a 19th-century church until its conversion in the 1930s. This production is all about characters and score, replete with marvelous character-defining songs from the fabulous team of John Kander (music) and Fred Ebb (lyrics). Director Blake gets it all in your face; it’s kind of cool to be witnessing all the sexualized tawdriness from old church pews.

The movie’s major plot is the tragic affair between English second-rate cabaret and pseudo-sophisticate Sally Bowles (Samantha LaMendola) and gay, aspiring American novelist Clifford Bradshaw (Michael Schaner). (Clifford’s character derives from Christopher Isherwood’s semi-autobiographical 1939 short novel “Goodbye to Berlin” that was adapted for the stage in 1951 by playwright John Van Druten as “I Am A Camera,” which became musicalized as “Cabaret” in 1966 with a book by Joe Masteroff.)

In the stage musical version, especially in Sherman, the subplot of the doomed romance between boarding house owner Fraulein Schneider (Tracey Marble) and Jewish fruit merchant Herr Schultz (David Halliwell) has more narrative heft than I recall. (It’s missing from the movie). There’s also the shady Nazi businessman Ernst Ludwig (Sean Coffey), who hooks up with Fraulein Kost (Anya Caravella), a prostitute who conducts business out of her room in Fraulein Schneider’s boarding house. Presiding over the action in the Kit Kat Klub and observing the machinations of the characters in the real world is, of course, the Emcee (Richard Damaso). Whether it’s sex, love, money or social status, everybody’s got skin in the game. The name of the game is survival; some know it, some don’t.

What’s most engaging about the stage musical is the full complement of Kander and Ebb songs in this version — 19 numbers in total, including songs added from the 1972 movie. The most familiar are from the movie — the Emcee’s “Willkommen,” “Money (Makes the World Go Round),” “Mein Heir” and “Maybe This Time” — but the gems are in the lesser known: Sally Bowles’ naughty, whimsical “Don’t Tell Mama” (about what she’s really doing in Berlin); the ironic “Perfectly Marvelous” (which portends the futility of Sally and Cliff’s relationship); Fraulein Schneider’s elegiac “So What” (a metaphor for the decline of Germany post World War I); and the lovely, affectionate duets of Fraulein Schneider and Herr Schultz “It Couldn’t Please Me More” (aka the “pineapple song”) and “Married” (so similar but so good — so what if it’s almost the same song twice?).

Director Blake also choreographs, with the unavoidable tip of the hat and pelvic nod to the legendary Bob Fosse, who directed the film version. There’s a method to Mr. Blake’s casting of the six Kit Kat Girls. The Emcee proclaims solicitously “the girls … are beautiful.” Not really. The girls in this “Cabaret” are a motley crew, one rail-thin, but mostly full-bodied, fleshy, bosomy — burlesquey. Their movements aren’t synchronized; they’re raw, which fits perfectly the mis-en-scene. (That raw quality pervades this show right down to the scene where a hungover Sally makes prairie oysters — actual raw eggs and Worcestershire — which Ms. LeMendola and Mr. Schaner actually get down the hatch.) The band is excellent. Its notes aren’t perfect, either; its sound is raw, too. The brass — slide trombone, sax and clarinet — is, well, brassy, as it should be. The Kit Kat Klub ain’t High Society, and its band ain’t Glenn Miller.

Each player has a moment. Aside from the American Cliff and English Sally, all the actors adopt German accents or intonations to some degree: I found Mr. Coffey’s Ludwig most authentic. Anya Caravella’s Fraulein Kost has a prostitute’s toughness and voice to match in leading the ensemble in the dark, foreboding “Tomorrow Belongs To Me.” Mr. Damaso’s Emcee is appropriately creepy; his rendition of “I Don’t Care Too Much” is appropriately and especially cynical.

Mr. Schaner navigates Cliff’s sexuality deftly, rendering a Cliff that is less driven to fall in love with Sally than she is driven for him to fall in love with her. Ms. LaMendola tackles the biggest challenge of playing Sally: delivering the famous Minnelli-signature title song on her own terms. In this version, Sally is fueled with cocaine; Ms. LaMendola’s interpretation isn’t pretty. It’s bold, unfiltered and angry (deep down she knows how much she’s lost); it’s raw and that’s what makes it powerful.

The biggest delights of the Sherman production are Ms. Marble and Mr. Halliwell. Their duets are not only perfectly charming, they are the tender spot, the emotional ballast and the soul, if you will, of this production. “Cabaret” doesn’t pull any punches. Says the Jewish Herr Schulz to his fiancée, Fraulein Schneider, trying to allay her fear of the rise of the Nazis, “Governments come, governments go.” Yes, but. The Emcee’s number with his gorilla girlfriend “If You Could See Her (Through My Eyes)” that concludes “she wouldn’t seem Jewish at all” still shocks.

If that weren’t enough, the last scene makes clear that the Emcee, presumably removed from the real world in his demimonde, couldn’t escape Nazi hate. As dramatist Bertolt Brecht, one of the lucky who got out of Hitler’s Germany, wrote, “Although the world stood up and stopped the bastard, the bitch that bore him is in heat again.” “Cabaret” is, sadly, relevant still.