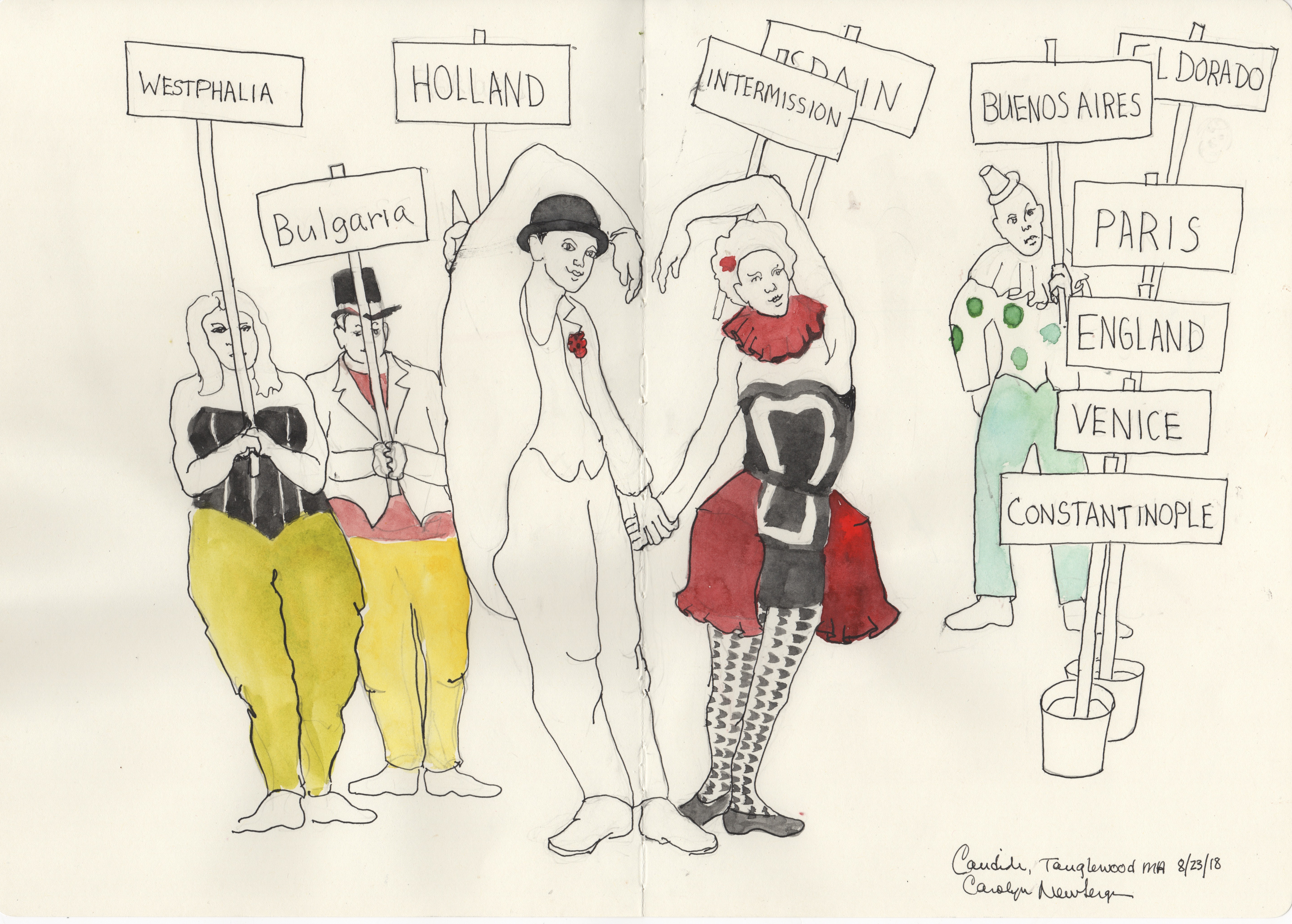 Lenox — In one of the best performances of the 2018 Tanglewood season, it was a gift to experience Leonard Bernstein’s sparkling and thought-provoking operetta.

In the hands of a splendid performing ensemble with virtuoso singers, a perfectly balanced orchestra and gorgeous choreography, we bathed in the sublime visual and acoustic possibilities of Tanglewood’s Ozawa Hall. The scene was set with a striking red backdrop covering the wall and balcony above the stage, and the anticipation of the strings of lights extending over the audience.

Here was a celebration of Bernstein at his finest:

Colin Jacobsen and Eric Jacobsen, artistic directors of the Knights and remarkable musicians in their own rights, brought together collaborators who successfully organized the production: Alison Mortiz, stage director; John Heginbotham, choreographer; Aaron Copp, stage and lighting designer; Amanda Seymour, costume designer; and Tony Kurzman, wig and make-up designer. They worked together seamlessly, producing a revelation of surprising effects including detachable red noses on the entire orchestra during a scene that addressed epidemic syphilis; pulling the conductor, Eric Jacobsen, off his podium into sexual byplay; and the transformation of the hall into a wedding tent in the glorious ending when the star-crossed lovers reunite.

An edgy dramatic hinge energized the story, seemingly derived from the fraught story of forbidden love in Wagner’s “The Ring” cycle, in which two amorous siblings, Siegdlinde and her brother Siegmund, in “Die Valkure” provoke the wrath of the gods and ultimately bring down the whole edifice in “Gotterdammerung” many evenings later.

Here, Cunegunde, played by coloratura soprano Sharleen Joynt, and her bastard half-brother, Candide, played by Miles Mykkanen, are unexpectedly pulled into a romantic relationship that leads to Candide’s expulsion from their over-the-top happy German family.

This in turn whirls into a two-hour wild goose chase involving worldwide searching and seeking refuge in Cadiz, Venice, Buenos Aires, Indonesia and Paris, among others, from corrupt cardinals, un-benevolent dictators, salivating pirates, self-styled helpers, too many prostitutes to count and a riot of sailors, controlling men, fallen women, athletic clowns and soldiers of various authoritarian persuasions, all of whose actions challenge a running succession of platitudes offered by a house philosopher, Voltaire, and an addled optimist, Pangloss, both of whom were played with abundant flair by baritone Evan Jones.

If the story is too complex to be summarized—and it most certainly is—it was brought to a semblance of continuity by the skillful deployment of placards, sandwich boards, announcements and props including mitres, crosses, huge moustaches, a pistol that sprouts a flag declaring “bang” when discharged, and an oceangoing sea chest that reappears at every disembarkation, which, when pried open, delivered a new surprise.

The show-stopper was Cunegonde’s disquisition on feminine beauty, “Glitter and Be Gay,” in which Sharleen Joynt culminated coloratura virtuosity and athletic physicality with a sustained series of powerhouse high E-flats, ending with a whoop that ascended to the otherwise-unsingable tonic of the key, a high A-flat. Here she is in earlier performance, sans that glorious final flourish.

On the instrumental side, a panoply of rhythmic backgrounds adorned the foreign excursions. These included medieval hymn, tango, rhumba, cha-cha, czardas, klezmer and several variations on sturdy themes of military parade.

If the overall story was a succession of loosely threaded skits, Bernstein’s music was a curio box that overflowed with pleasures. The conductor, Eric Jacobsen, held it all together with panache, and frequent and winning expressions of love and collegiality with his brother, Colin Jacobsen, seated before the orchestra to Eric’s left, playing as much co-leader as concertmaster.

Not least of the satisfactions of “Candide” is the over-the-top-clever dialogue and verse, contributed by a gaggle of celebrated collaborators, including poets Richard Wilbur and Dorothy Parker, and playwrights Lillian Hellman and Stephen Sondheim.

Richard Wilbur’s lyrics to “Glitter and Be Gay” are a prime example. They brim with pious nostrums, conflicted sexuality, anatomical puns and guilty materialism:

Glitter and be gay,
That’s the part I play;
Here I am in Paris, France,
Forced to bend my soul
To a sordid role,
Victimized by bitter, bitter circumstance.
Alas for me! Had I remained
Beside my lady mother,
My virtue had remained unstained
Until my maiden hand was gained
By some Grand Duke or other.
Ah, ’twas not to be;
Harsh necessity
Brought me to this gilded cage.
Born to higher things,
Here I droop my wings,
Ah! Singing of a sorrow nothing can assuage.
And yet of course I rather like to revel,
Ha ha!
I have no strong objection to champagne,
Ha ha!
My wardrobe is expensive as the devil,
Ha ha!
Perhaps it is ignoble to complain…
Enough, enough
Of being basely tearful!
I’ll show my noble stuff
By being bright and cheerful!
Ha ha ha ha ha! Ha!
Pearls and ruby rings…
Ah, how can worldly things
Take the place of honor lost?
Can they compensate
For my fallen state,
Purchased as they were at such an awful cost?
Bracelets…lavalieres
Can they dry my tears?
Can they blind my eyes to shame?
Can the brightest brooch
Shield me from reproach?
Can the purest diamond purify my name?
And yet of course these trinkets are endearing,
Ha ha!
I’m oh, so glad my sapphire is a star,
Ha ha!
I rather like a twenty-carat earring,
Ha ha!
If I’m not pure, at least my jewels are!
Enough! Enough!
I’ll take their diamond necklace
And show my noble stuff
By being gay and reckless!
Ha ha ha ha ha! Ha!
Observe how bravely I conceal
The dreadful, dreadful shame I feel.
Ha ha haha!

In the edited book “What Fresh Hell is This” by Marion Mende, Parker is quoted: “I had only one lyric in it … Thank God I wasn’t there while it was going on. There were too many geniuses involved.” Dorothy was irritated by Leonard Bernstein’s presumption that he knew how to write lyrics. She complained to Hellman that he clearly wanted to handle the whole show himself. Some years later she was still shaking her head over his mania “to do everything and do it better than anybody, which he does, except for lyrics. The idea was, I think, to keep Voltaire, but they didn’t.”

The comic brilliance of Bernstein’s versifying in the dialogue between Cunegonde and her amanuensis, the Old Lady, in the song “We are Women” speaks for itself in sauciness, depth, and literary allusions.

Watch here as Kristin Chenoweth in the role of Cunegonde and Patti LuPone as Old Lady perform with the New York Philharmonic under the baton of Bernstein’s student, Marin Alsop.

OLD LADY
Not a man ever born ever could resist
A well-turned calf, a slender wrist
A silhouette as airy as the morning mist
And a dainty dimpled knee

CUNEGONDE
Every male I may meet must acclaim for weeks
My twinkling thighs, my flaxen cheeks
My memorable mammaries like Alpine Peaks
High above a wine-dark sea

OLD LADY, CUNEGONDE
We’ve necks like swans, and oh, such sexly legs
We’re so light-footed we could dance on eggs
(They do)
A pair of nymphs from fairyland
And every day in every way our charms expand!

You may add, if you wish, to that growing list
A mouth so fair, it must be kissed
And parts we cannot mention but we know exist
In a rich abundancy
Not a man ever born ever could resist
A pretty little thing like me

OLD LADY
Not a man ever born ever could resist
A well-turned calf, a slender wrist
A silhouette as airy as the morning mist
And a dainty dimpled knee

CUNEGONDE
Every male I may meet must acclaim for weeks
My twinkling thighs, my flaxen cheeks
My memorable mammaries like Alpine Peaks
High above a wine-dark sea

OLD LADY, CUNEGONDE
We are brava divina to balletophiles
(They dance)

OLD LADY, CUNEGONDE
A pair of nymphs from fairyland
And every day in every way our charms expand!

You may add, if you wish, to that growing list
A mouth so fair, it must be kissed
And parts we cannot mention but we know exist
In a rich abundancy
Not a man ever born ever could resist
A pretty little thing like me

Social commentary like this suffused the performance, much extending eerily to the present day. Especially with regard to sexuality, Bernstein and Richard Wilbur dared to address the prevalence of syphilis among the courtiers of the day, in the eternal optimist Pangloss’ solo with chorus, “Dear Boy.” This scene also presented the elaborate scarves and neckpieces that the aristocracy contrived to hide their scrofula canker sores.

Dear boy, you will not hear me speak
With sorrow or with rancor
Of what has shriveled up my cheek
And blasted it with canker;

Twas Love, great Love, that did the deed,
Through Nature’s gentle laws,
And how should ill effects proceed
From so divine a cause?

Dear boy:
Sweet honey comes from bees that sting,
As you are well aware;
To one adept in reasoning,
Whatever pains disease may bring
Are but the tangy seasoning
To Love’s delicious fare.
Dear boy.

PANGLOSS
Columbus and his men, they say,
Conveyed the virus hither,
Whereby my features rot away
And vital powers wither;

Yet had they not traversed the seas
And come infected back,
Why, think of all the luxuries
That modern life would lack!

Dear boy:
All bitter things conduce to sweet,
As this example shows;
Without the little spirochete,
We’d have no chocolate to eat
Nor would tobacco’s fragrance greet
The European nose.
Dear boy.

PANGLOSS
Each nation guards its native land
With cannon and with sentry,
Inspectors look for contraband
At every point of entry,
Yet nothing can prevent the spread
Of Love’s divine disease;

It rounds the world from bed to bed
As pretty as you please.
Dear boy:
Men worship Venus everywhere,
As may be plainly seen;

Her decorations which I bear
Are nobler than the croix de guerre,
And gained in service of our fair
And universal Queen. Dear boy.

Like so much of this piece and fabulous performance, this was an inspired and informative entertainment. And prescient as well, your reviewers would add. Just today came an announcement from the Centers for Disease Control and Prevention that “nearly 2.3 million cases of syphilis, gonorrhea, and chlamydia were diagnosed in 2017—the highest number ever reported in the U.S. Since 2013, diagnoses of gonorrhea, syphilis, and chlamydia are up 67 percent, 76 percent, and 21 percent, respectively. Chlamydia, the most common of the three diseases, saw 1.7 million cases last year.”