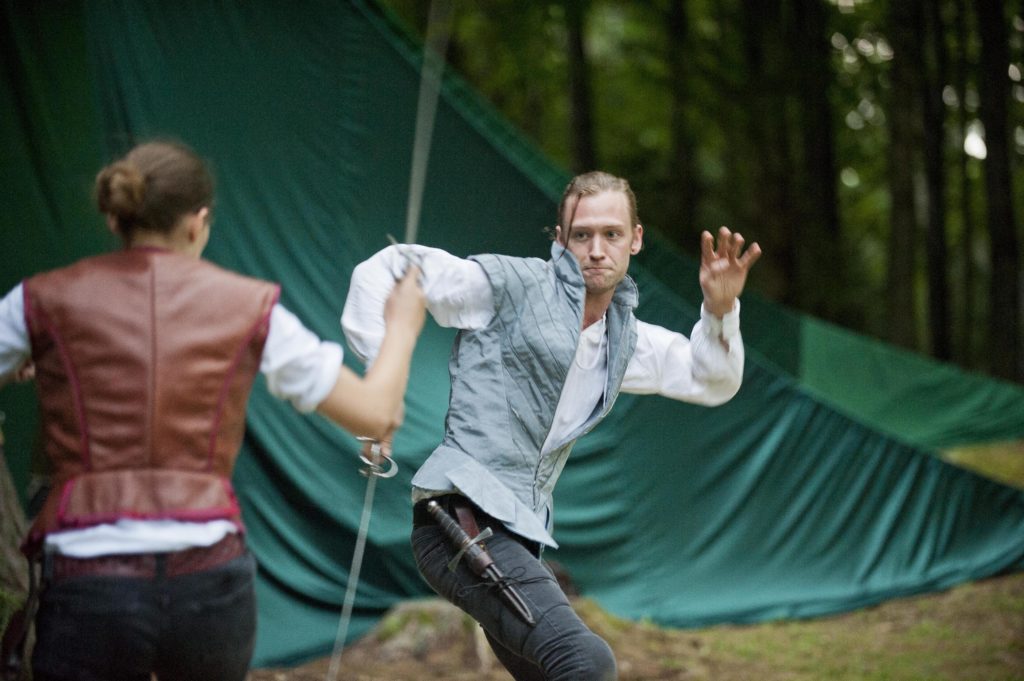 Review: Romeo and Juliet, Shakespeare in the open air

Romeo and Juliet By William Shakespeare.

“Married? It is an honor I have dreamed not of.”

Shakespeare in the open air is a treat not to be missed. That goes, especially, for “Romeo and Juliet” in the dell behind the barn at Edith Wharton’s The Mount in Lenox, Mass., where Shakespeare and Company has brought its touring company after an exhaustive school tour in New England for a set-down run. Six actors play most of the roles that Will Shakespeare created and with the excision of the Apothecary scene and some smaller cuts throughout this play runs 90 minutes without an intermission in a version directed by the estimable Jonathan Croy.

Croy has done this before, notably in 2009, when the play took up residence in the Elayne P. Bernstein Theatre. Some of the most delightful moments from that production are replicated in this new one but a lot of what we see in The Dell is better and grander and much more fun than ever. While this may rank high among Shakespeare’s tragedies (enough important deaths take place in the last half of the play to make it a war play) the Croy re-imagining takes advantage of the exuberance of teenagers and the romantic sensibilities of young lovers.

Not just Romeo and Juliet play through their youthful passions. Tybalt, Mercutio and Paris also exhibit the impatience of teens to find expression and emotional outlets. Sister Joan, a replacement for Friar John (although why this should be so eludes me as male and female cross-gender playing imbues this version with much of its charm), is also a youth whose natural tendencies seem to hinder the small successes that would alter the ending of the play.

Marcus Kearns is a handsome Romeo with an infectious grin of a smile. His handsomeness is only exceeded by his bravado and his swordplay and fights are among the highpoints of the show. Kearns is wonderful, just the romeo this Romeo should be. He doubles in the small role of Balthasar, his own servant. 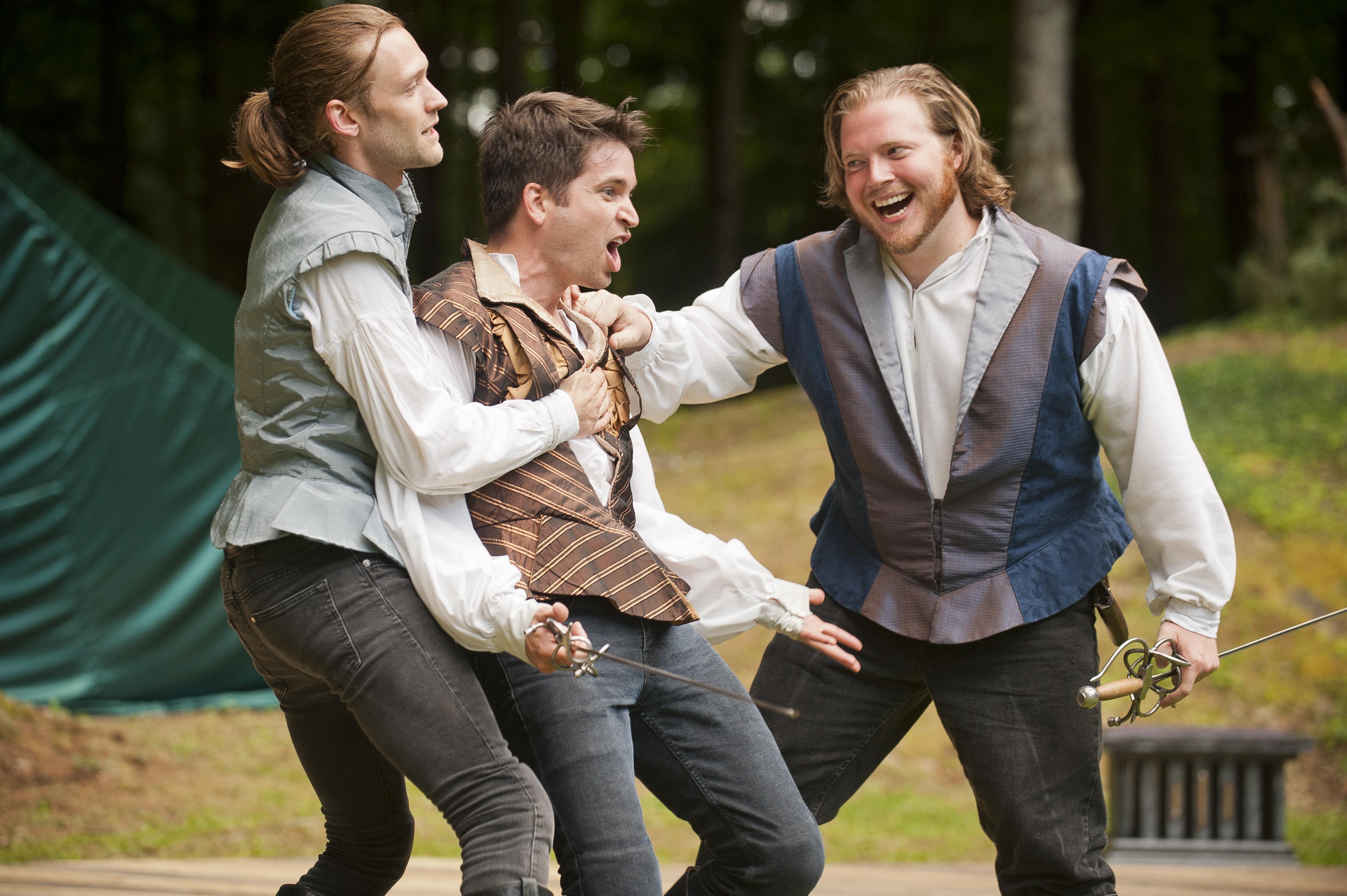 Caroline Calkins is a thirteen-year-old Juliet, a girl on the verge of young womanhood who cannot seem to wait another day for something wonderful to happen to her. “Much more, much more….” you can almost hear her sing in the song from “The Fantasticks.” She doesn’t, but you can still hear, feel and almost touch it. Calkins youthfulness is tempered when she plays Romeo’s mother, Lady Montague.

Conor Moroney plays The Chorus, Benvolio, Paris, Escalus – The Prince of Verona, each with a different style, a different look, a different voice. It is his voice that is so striking, however, rich and deep and yet different in every role. His totally realistic and tragic reaction to the things that occur around him as Paris in the play is marvelous. He is constantly engaging.

Luke Reed is strong and youthful as Mercutio, grand and imperious as Lord Capulet and totally off the wall as the servant Sampson. Reed manages to be fey and fay and fray our nerves at the same time. As the composer and performer of the incidental music for the play Reed displays another side of his talent that profits the production immensely.

Kaileela Hobby plays a grand and imposing Lady Capulet and sly and devious Tybalt and the newly christened Sister Joan, each with her/his own set of gestures, postures and voices. Again, it is the way the actor presents each character that makes this so very wonderful an experience. 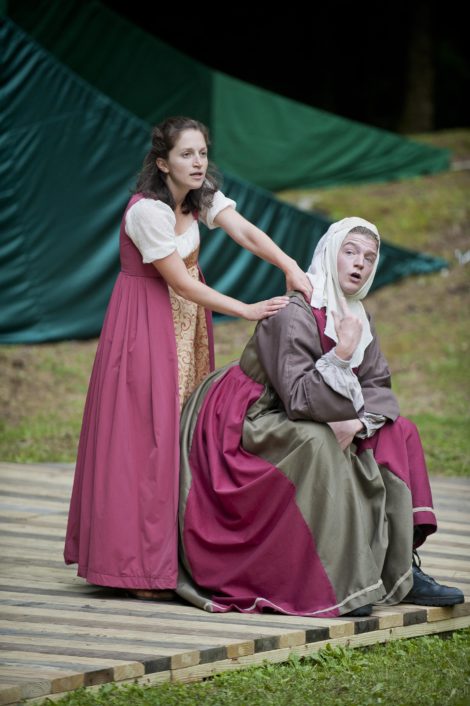 In the most fun role-switching, even having a brief scene with himself, is Greg Boover as Friar Laurence, the Nurse, Lord Montague and the servant Peter. Boover is a comic honeybun, making a-vista costume/role changes, behaving in the traditional burlesque fashion as the Nurse, and behaving in the traditional quasi-tragic soulful appearances of the Friar. And, it should be noted, not only does he play Juliet’s Nurse’s servant, Peter, but so do Hobby, Moroney and Reed at different places in the play. It’s as though this is a play about Peter. Which, of course, in its coarsest double-entendre aspects, it is.

This is such a fun afternoon theater experience that even though the ultimate trio of deaths is tragic and moving, that is not a downer in this production. It is merely the ultimate goal before the talk-back which I stayed for and thoroughly enjoyed. This show is too much fun to miss.

Romeo and Juliet plays at The Mount, located at 2 Plunkett Street in Lenox, Mass., through August 23. For information and tickets call the Shakespeare and Company box office at 413-637-3353 or visit the Berkshire Edge Calendar for tickets and a complete schedule of Shakespeare & Company productions. 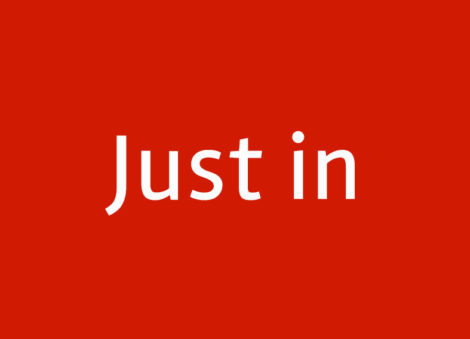