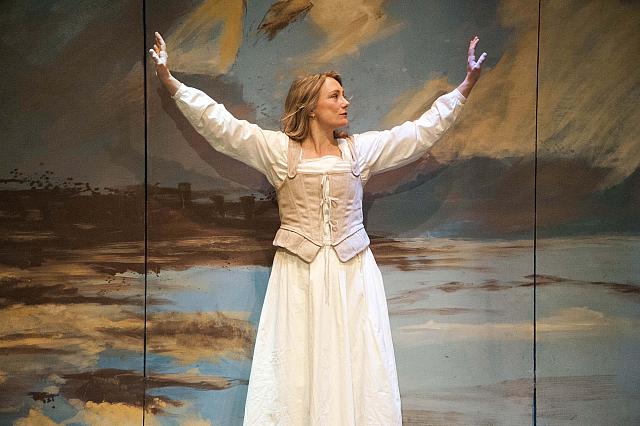 Shakespeare’s Will by Vern Thiessen.

“You were a rough, rocky shore!”

What we know about William Shakespeare’s wife can be carried around in a thimble. This leaves a lot of conjecture for writers of fiction and plays.

Author Vern Thiessen in his play “Shakespeare’s Will” adds a new vista to the life of the wife of the man who revolutionized prose, poetry, theater and the English language. In Thiessen’s play Anne Hathaway Shakespeare is most probably his equal in many things and her reward for her years of loneliness, lustiness and loving is a misunderstood legacy of much of the same.

On stage at the Elayne P. Bernstein Theatre at Shakespeare & Company in Lenox, Mass., actress Kristin Wold brings to life the widow of the poet in the hours after his funeral. She has returned home to mourn alone and await a visit from William S’s oldest sister Joan, unmarried and vindictive.

Anne is a strong-willed woman, a Protestant who has married a Catholic against her father’s wishes, bourne her Catholic husband’s three children, supported his need to discover his talents and lived, basically, alone through their marriage as he has pursued a career on the stage, first as an actor and then as a playwright. She is convinced that her husband is a closet homosexual and she, herself, has all the qualities of a first-class strumpet (look it up, it’s a quality word). Now she is a widow and there is something in her late husband’s will that some might take amiss.

Anne, as played by Wold, may end up disappointed, but she will never be bowed down. In her monologue of remembrance during the hour alone at home awaiting her sister-in-law, Anne takes us through her life and her love of life through monologue and dialogue, all delivered by Wold in a wonderful, light and humorous fashion with much of the darkness somewhat removed from her staged reality.

Anne’s story is not a light and frivolous one. She deals with each problem in her life with the strength of a biblical Judith. However, not much is made of her tribulations and her acquired wealth through her distant husband’s work and success lightens some of the emotional burden she might have shared, but doesn’t, in this script. This is a weakness of the play; there really is very little struggle or trouble, there is just separation and the difficulties it promotes.

We learn, for instance, that Will S. never took much interest in his second daughter. We learn that he rarely expressed much husbandly lust for his lusty wife, perhaps because she was eight years his senior and she somewhat trapped him into marriage through an unanticipated pregnancy. We discover through her played dialogue and her overt impressions that Will might well have had more than mere tendencies in the homosexual direction. There is even an indication that he might have been in a relationship with someone who was his benefactor and his inspiration for sonnet, someone like Henry Wriothesley, 3rd Earl of Southampton, a beautiful young man with a passion for the stage.

Still, so little is known of Shakespeare’s activities or those of his wife, all of this is fiction made fact, fact construed as fiction. What is known is that Anne lost most of her accorded third of his holdings through his will which left her only his “second-best bed and its furnishings.” This play leaves us with the conceit that this was a brush-off, a back-of-the-hand slap for reasons undisclosed or conjectured. In reality, it seems, that what he left her was their wedding bed, the best bed always having been, in those times, the bed prepared for honored guests.

Wold delivers a remarkable performance, strong, in-charge, in character and in incredible physical force. She strides, sings, dances, strips, has memorable sex and remarkable reactions to the simplest things that occur. She triumphs in a role that is written out of imagination and history combined; she breathes life into a name without a face and a presence without presence.

After a whirlwind 95 minutes of performance Wold’s Anne revels in a sonnet written for her by a man who could never have understood what he possessed in a wife. The sonnet is not his best but it indicates the man he is meant to be. The sonnet is not her best side but it highlights the only truths we can find about her. Hathaway is transformed into Hate Away and those two words inform their relationship in this play.

Daniela Varon has directed Wold in a wild and crazy manner. We never notice her take a breath, and how she can breathe in the tornado of this play is a mystery. There is never a dull moment, barely ever a quiet one, but the result is a play in which brimstone and fire are condensed into a Campbell’s soup can of cream and magic. Patrick Brennan does wonderful things with his simple set and Govane Lohbauer’s costumes are best understood through the wonderful exhibit outside the theater’s entrance. Elizabethan clothing is complex. Matthew Miller’s lighting is evocative and sometimes strange but he does enhance the character’s moods very nicely. Alexander Svoronsky’s music adorns the play, like ribbons on a pleasureable gift.

Time flies when you’re having fun and this is a strangely fun event. One person theater can be a drag, but not this time around. The stage abounds with characters, all of them displayed by the actress in the spotlight. Here is a chance at the magic of talent used to create a mystery as a reality.

For information and tickets contact the box office at 413-637-3353 or consult The Berkshire Edge calendar listing.