Who would have thought that a jazz score could bring a German Expressionist silent-film classic to new life? Jazz genius Chris Washburne that’s who. At the Fisher Center for Performing Arts on the Bard College campus in Annandale-on-Hudson Friday, Nov. 2, band leader and trombonist Washburne lead his ensemble, Rags and Roots, in a live accompaniment to a newly remastered print of the 1921 horror classic “The Cabinet of Dr. Caligari.” Washburn conceived and composed the score from dozens of jazz melodies from the year the film was made. Washburne, besides being a world-class musician, is an authority on the history of music and teaches ethnomusicology at Columbia University. His wealth of knowledge was evident in the range of jazz selections that brought new, revelatory definition to what most film historians regard as the first horror film. 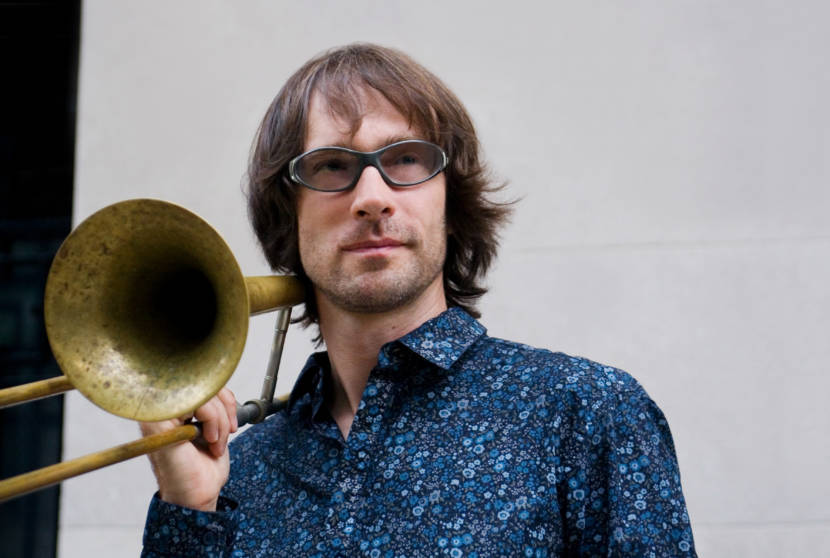 “The Cabinet of Dr. Caligari,” which tells the story of a murderous sleepwalker under the control of an insane hypnotist, is really an exploration of mental illness, couched in the theme of reality vs. illusion. The film’s Expressionistic visual style of odd angular forms and dark shadows fits perfectly with the unexpected, sometimes jarring, contours of jazz, and vice versa. Washburne’s orchestrations enhance screen action in “Caligari.” Silent screen movement isn’t smooth; the jazz here is sharp around the edges, too. His musical direction was timed perfectly to the rhythm of the 84-miunute minute film, segmented into eight theatrical-style acts.

Washburne’s band — besides his trombone, clarinet, trumpet, bass, piano/accordion, drums — was uniformly excellent. An unexpected feature of the ensemble was jazz vocalist Brianna Thomas, whose smooth alto dipped into unobtrusive song here and there or eerie scat that mimicked screams of panic from the sleepwalker’s victim. But Washburne’s addition to the ensemble of tap dancer Jerry Clicquot was inspired. Clicquot’s footwork was jazz, too. A staccato tap punctuated moments of heightened plot tension; a repetitive tap evoked footsteps of the sleepwalker’s victims running to escape. In effect, Clicquot’s tap percussion became Washburne’s underscore.

Kudos to Bard’s inventive artistic direction, Washburn’s genius and the generous philanthropy that funded Washburne’s brilliant score. This unique work needs to be rescheduled again for more to experience.