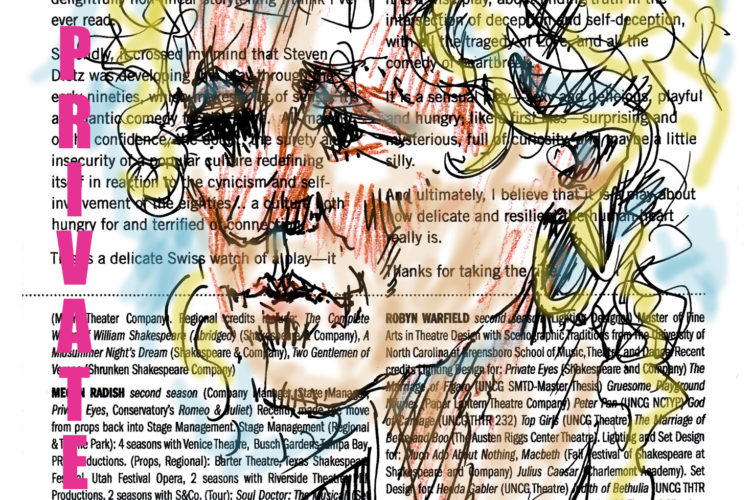 Lori Evans, as frank the analyst in 'Private Eyes.' Illustration by Sol Schwartz

“They want something from you. . .and you from them.”

A man discusses his dreams and his hopes and his life with a woman who is seemingly a professional, an analyst with a man’s name who sometimes addresses the audience as though they were a class she was teaching. The same man plays a director in a play about a man just like himself. Another man directs the first man in the same play while making love to the other man’s wife in the play who is also the man’s wife. A woman detective plays a role in the life, or in the play about the life, of the man whose wife is having an affair with the actual director. . .or have I missed something somewhere along the way? I can tell you this much at any rate: there are more malfunctioning actions in this play than can be counted in one sitting.Shakespeare and Company usually presents a mystery at this time of year. Sometimes it is tragic,

sometimes comic. Sometimes it is a miniature revolution attempting a maximal revelation. This time around it is a remarkably amusing, confusing, illusionary work which tests the limits of credibility and understanding. With a lovely young company of talented actors director Jonathan Croy is giving the audience a hard time, a good time, a fun time, a crime time. This is a play without any answers, let alone easy answers. At one point in the show an acting couple perform the final moments in a play they are rehearsing which later on becomes their own final moments. . .or is it still just the play they are working on. We want to know for sure, but the playwright, Steven Dietz, would rather leave us guessing. This can be frustrating, but if you go with the very deliberate flow, it can be frustrating. Get it?

As the husband, Matthew, Luke Reed is highly credible even when his credibility is in doubt by Frank, the analyst. Reed has a great and honest face and when he loses his temper, or his sanity, or his wife or his mistress, if he ever really has one, he becomes a tremendously handsome maniac, the kind you would trust with your dog but not with your wallet. He handles the many changes his role demands with aplomb. Or a plum. Or salad. Reed is just fine in the part and that is really saying something.

His acting partner, Lisa, is played by Caroline Calkins. Every moment she has on stage sings with clarity and reality. But she never sings. Her relationships with both of the men in the company are identically different. If you close your eyes you know exactly which one she is talking to from the subtle alterations in the tone of her voice. So imagine your surprise when you open your eyes and find you’re wrong. Or did you just wait a moment too long? Calkins has the most difficult role, being the same to everyone and performing the same scenes repeatedly without variation even when the situation is different.

Elizabeth ‘Lily’ Cardaropoli plays Cory who is many things to all people including the physical embodiment of an approaching hurricane, not an easy task for an actress to perform. Cory is a master of disguises, unrecognizable from one assumed persona to another, yet always the same if you look carefully. The ultimate revelation, her true self with a gun, is even more exciting in its reactions than in its playing.

As the fifth wheel in this circus wagon of a play, Lori Evans is the real or imagined Frank, a doctor who doesn’t understand “conflict of interest” and may not even be real. She commands the stage in her scenes and monologues. She gives the play an importance that no one can sustain in Dietz’s crazy dialogues. If there is gravity on this planet any longer it is embodied in the playing of Lori Evans. Or does that role fall to the sixth person in the curtain calls for this five character play.

In his usual way director Jonathan Croy blends all of these outrageous elements into a well-woven cloth that cannot be breached by a sword or damaged in a flood. Croy keeps the flow of the show on the down-low and manages to constantly intrigue us with author Dietz’s convoluted realities. On leaving the theater afterward all I could think was that I had witnessed something I could never testify to in court and yet I was sure I understood everything in spite of the evidence to the contrary. I love to be challenged and Croy, Dietz and the company have left me feeling just that way.

The production’s set designers Patrick Brennan and Devon Drohan have provided a marvelously gimmicky simple set that works perfectly well. Robyn Warfield’s lighting design is excellently quirky with pools of light here, there and everywhere. Govane Lohbauer’s costumes are right for the characters. Croy has worked well with his associates here.

See this play to be amused. While there may be a detective in the play, the audience really assumes that role and works with the actors to develop satisfactory solutions to the problems presented by the playwright. Just don’t take it too seriously. Unless you want to, that is. Unless you find something of your own self, your own life, in the odd goings-on on-stage. That is. But laugh. I did.

Shakespeare & Company’s seductive, delicious “Private Eyes” is performed every weekend through November 9th at the Elayne P. Bernstein Theatre on Kemble Street.. For tickets and information, go to the Berkshire Edge calendar, contact Shakespeare.org or call (413) 637-3353 for tickets