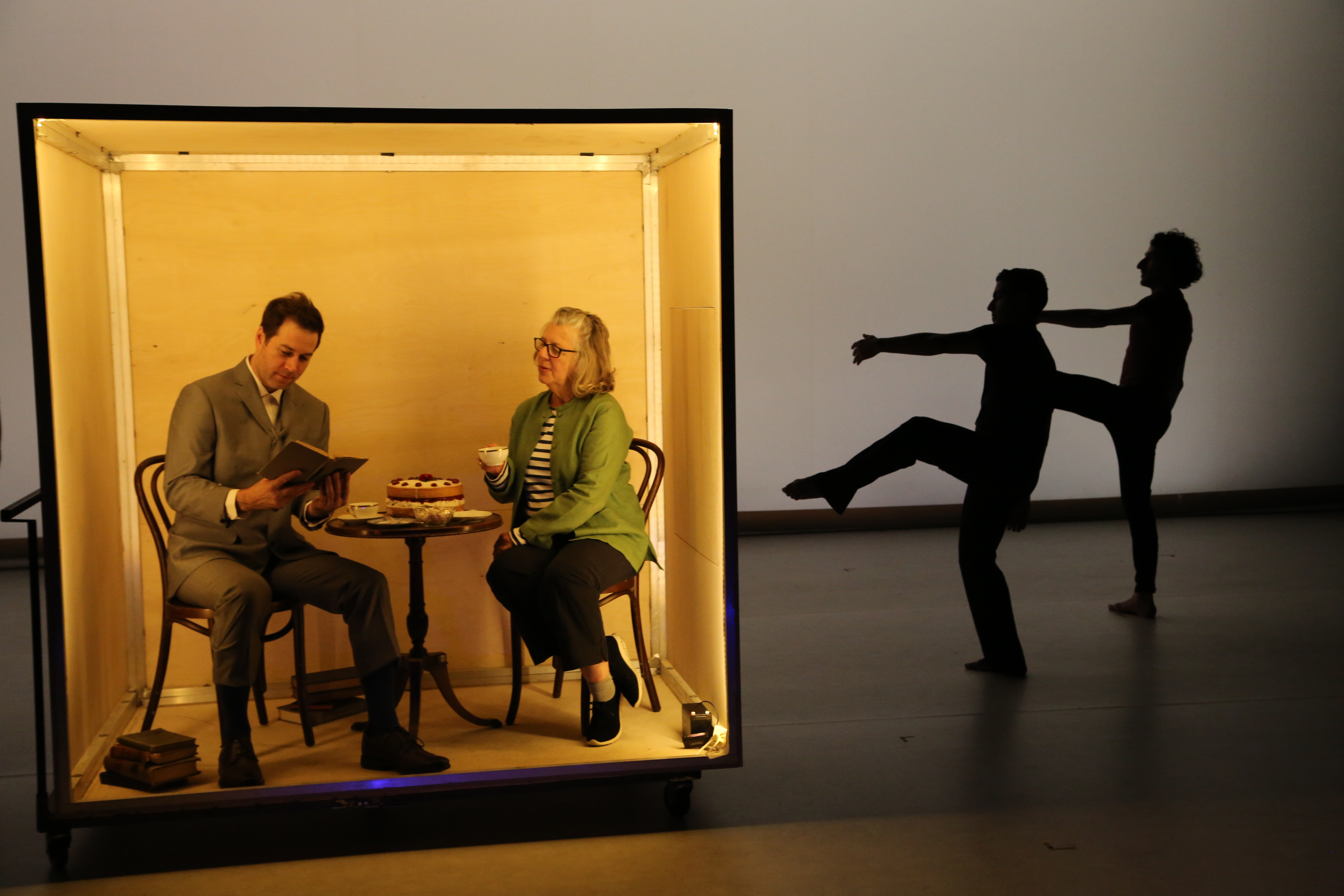 A muslin covering safety pinned over my seat, Row D seat 2, said “The PRESS (ure) is GREAT” in hand written lettering. I felt very proud to be sitting in the press seat. In fact, I felt so proud that Eli took a picture of me with a big smile next to the seat.

Eli’s seat said, “WHY MUST HE BE SO CONTRARY?”

HOW DID THEY KNOW ELI WOULD BE SITTING IN THAT SEAT?

In fact, everybody’s seat had a muslin covering with words that I don’t remember. I was only interested in my seat…and the miracle that somebody knew that sometimes Eli can be contrary.

When we looked in our programs, we found a special gift, a postcard with a picture of a potato, compliments of Dance Heginbotham and Maira Kalman. Since we had just received a gift from a friend of several beautiful potatoes still covered with dirt from their garden, this was especially personally meaningful to me.

On the stage, an old fashioned TV cabinet showed a screen with a volcano, spewing fire and brimstone over and over. The show started with the artist Maira Kalman sitting on a wood platform at the back of the stage, looking like most of my friends. That means she has gray hair, glasses, a little plump but nice looking for her age, a kind of a mousy look, but definitely straight forward. In other words, a woman of few words but no nonsense. At her age. After all.

Now in real life, Maira Kalman is a famous artist and writer. Her drawings and writing look like they could have been done by a child but don’t let that fool you. She writes a monthly on-line column for the New York Times, and witty and wonderful books for children… and for grownups, too. In fact, there’s a terrific show of her art in the lobby of the Doris Duke Theater.

But I digress; back to the stage and Maira on the bench. The performance begins with Maira speaking one word: “Pompeii.” After a pause, she provides the date (79 AD) and the weather report, which was for pretty good weather.

Carolyn’s Uncertainty Principle Number 1: Don’t ever trust the weather report. Ever. Death is just around the corner.

On the stage, a dancer in red pants (signifying fire?) lies contorted, as though he is frozen under the 20 feet of volcanic ash that buried the 11 thousand people living in Pompeii on that fateful day in 79 AD. A few feet away, a lithe dancer in a green skirt (signifying life?) playfully moves to a folksy tune on Nathan Koci’s accordion, while Maira (may I use her first name?) continues to recite snippets of disasters, such as, “I can’t believe what you said to me.”   And “March 15, gloomy air. Gloomy, gloomy gloom.”

Meanwhile, AS IF THAT WEREN’T ENOUGH (Dayenu!), Maira Kalman’s white line drawings are projected lickety-split on a huge black screen at the back of the stage (such as: a drawing of a shoe with the legend, “He wore the shoes that slowed down time.” WHAT?!!) , and The Knights, led by violinist Colin Jacobsen and three stunning musicians on cello, flute, vocals and accordion are playing their hearts out. It’s quite a lot to take in. It’s also fun. And funny.

Carolyn’s Uncertainty Principle Number 2: If disaster is always around the corner, you might as well have some fun.

And fun is what we had! This collaboration between Jon Heginbotham (a Jacob’s Pillow award winner and Mark Morris alumnus plus Merce Cunningham devotee you could see the influences), Maira Kalman (already talked about her), and Colin Jacobsen and The Knights (aka Tanglewood and Silk Road superstar among other things) was a non-stop kaleidoscope of saucy, wry, irreverent, meltingly beautiful, absurd, golly-gee-whiz, vignettes of horror and delight, ricocheting from Schubert (a delightful, intelligent sendup of Die Shöne Müllern) to Latin dance, to Texas Country yodeling and everything in between; to dancers sliding on their backs in super speed across the stage, rubbing their feet together, or swirling in gorgeous classical formation — and everything in between THAT.

Here are some highlights:

The performance ended (all too soon in my humble opinion, but they were probably exhausted) with a monologue by a serious young man in a suit sitting in a lighted box, on the now dark stage, with Maira Kalman sitting in the box with him. He began with a word here. She said, “No.” And a word there. She said, “No.” He started a quote from a book at his feet. Maira said, “No.” Then he began talking about his grandparents, then his parents, himself, and she sat and listened, as the box moved to just in front of the audience and then across the front of the stage, as though we were joining them within the light of the rolling box.

Carolyn’s Principle of Uncertainty Number 3: Stay with your truth.

Finally, after the box with Maira and the young man was rolled off the stage and out the theater door, the dancers returned to the stage.

And danced in silhouette. In silence.

‘The Principles of Uncertainty’ plays at the Doris Duke Theatre at Jacob’s Pillow through August 27. For tickets and information, consult the Berkshire Edge Calendar, or call Jacob’s Pillow box office at 413-243-0745.