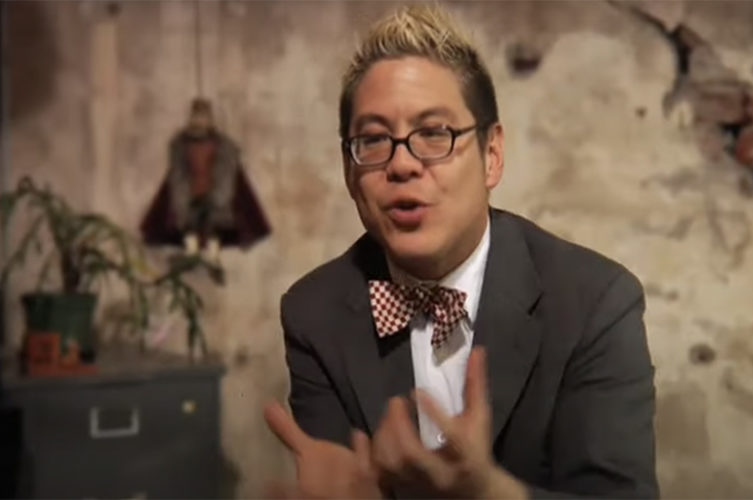 It’s not much of a contest, really. No other ensemble does so much to please their fans, and less than zero of them verify their audience’s happiness scientifically. (Pink Martini actually has a web page devoted to collecting anecdotal evidence of individual fan happiness levels.) So, clearly, the group has a multi-decade track record of disseminating their unique brand of celebratory sentiment, not just throughout the world but throughout the year.

All this would seem to be enough.

But here’s the clincher: No other touring ensemble dispenses pure happiness, year round, in 25 different languages. Only Pink Martini is capable of even contemplating such a thing outside the halls of the United Nations. Case closed.

And the runners-up? The New York Times made a list of them, and you should take a look at it if you are interested in Gene Simmons’s tongue.

Pink Martini began their New Year’s Eve show with a reminder that this is a band with chops out the wazoo. This fact is easy enough to overlook until someone takes a solo, which is always an “aha” moment with this band. Trumpeter Gavin Bondy started the show with Harry James’ “Concerto for Trumpet” — basically “Flight of the Bumblebee” in wolves’ clothing — a positively frightening torrent of death-defying hemidemisemiquavers. Double bassist Phil Baker took a solo on one number and set the record straight in no uncertain terms: the man is a monster on double bass, venturing to the limits of his instrument as nonchalantly as if he were tossing a coin. Another one to watch is guitarist Dan Faehnle — he toured with Diana Krall for years — another monstrously capable jazz player who keeps an inconspicuous profile on stage.

But all of Pink Martini’s musicians are demonstrably superb.

It’s important to understand that, while Pink Martini may appear on stage to be a group of adults in formal attire, the ensemble is, in fact, a band of adult kids playing dress-up, staging a home-grown show from Thomas Lauderdale’s loft, in the tradition of Mickey Rooney and Judy Garland. Imagine the Little Rascals at the Copacabana. You get the idea.

Thomas Lauderdale sincerely believes it is a good and appropriate thing to simply entertain people and that, in the moment, the joy thus engendered is entirely sufficient to that moment. More than anything else, this outlook, Lauderdale’s personal Zen of audience amusement, deserves credit for what has clearly established Pink Martini as America’s preeminent Keepers of New Year’s Eve. Maybe next year they’ll do a holiday show with the Boston Pops.