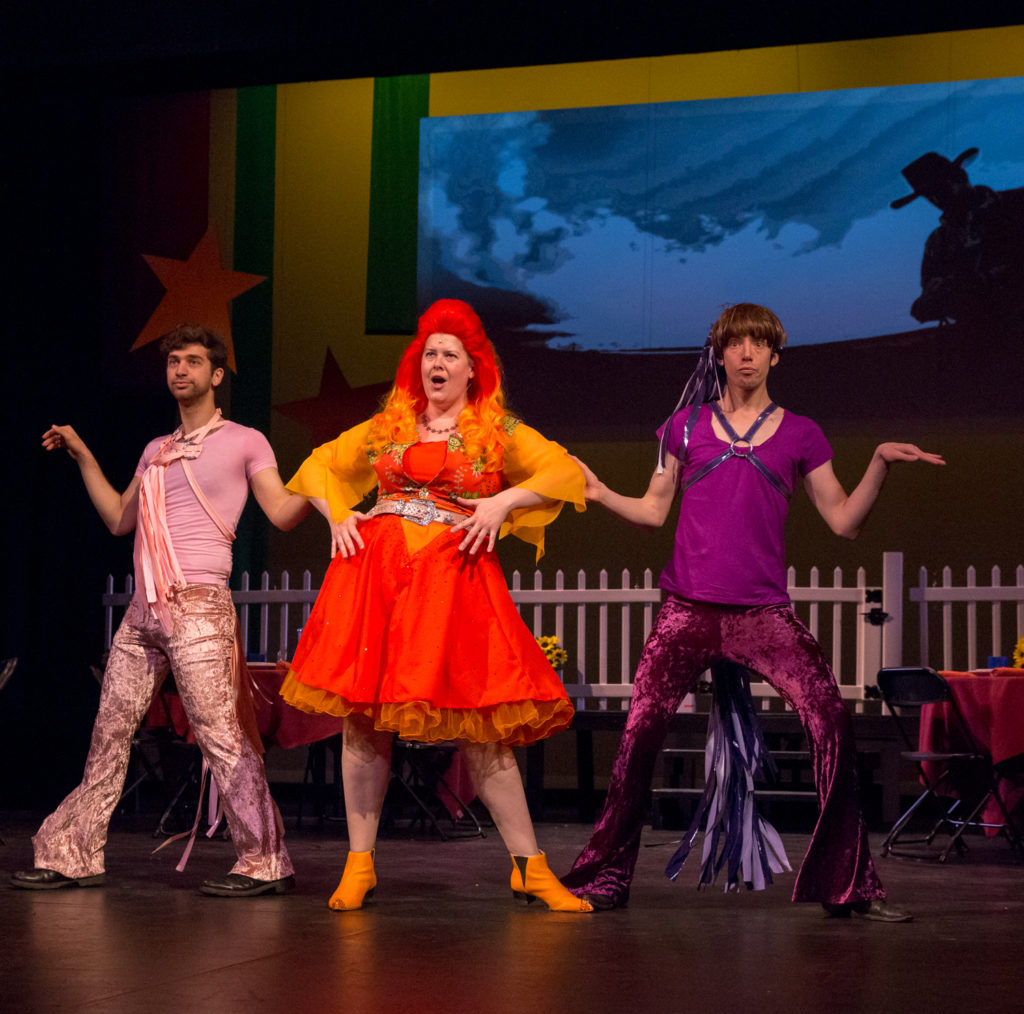 “Orange Star Smasharoo” is an exploding cigar of a show.   Somewhere on the spectrum between “Gypsy” and “El Grande De Coca Cola,” this exuberant send-up is the ultimate offering at Bard College at Simon’s Rock’s inaugural “Daniel’s Art Party.” Artistic director Ken Roht has cooked up an immersive comedy set in a dinner theatre that happens to be about an immersive comedy set in a dinner theater. And it’s a blast.

Somewhere way out west and beyond Brigadoon is a Technicolor town called Smasharoo, Wyoming, where a stage mother with ambitions to birth the Andrews Sisters winds up herding cats instead, naming her children “Orange Star,”  “Green Clover” and “Yellow Moon.” Orange is her favorite, with Creamsicle hair, a sunny outlook and the pipes of Ethel Merman. It’s Orange’s show, or almost, and Broadway star Lauren Elder clearly loves the role, treating her audience to anthems, ukulele tunes and comfort food.  Literally. As in, ravioli. 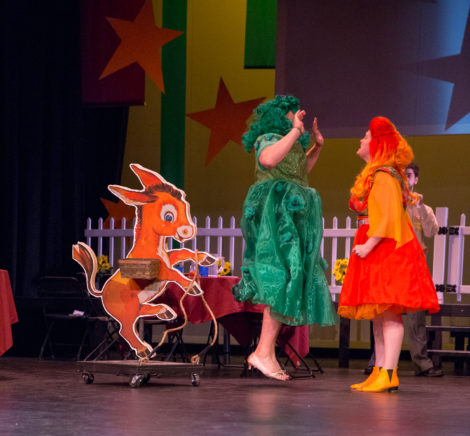 Unfortunately Orange’s sister Clover is closer to Little Edie from Grey Gardens — jealous, scabrous and weirdly in control.  From her first entrance in a cloud of green smoke, Clover’s got us in the palm of her hand, batting her huge eyelashes and clomping about in her size-twelve mules, stealing the green spotlight every chance she gets. Clover’s a big gal with a big chip on her shoulder who likes to shimmy, slither and cut others down to size.

The fact is, Clover’s a star in her own right – admittedly a very dark star — played with maximum gusto by rising local talent, Chris Tucci.  Clover is also the world’s worst mother (she stuffs her son Corky upside down in a garbage can for the better part of act 2)- but Clover’s got bigger fish to fry than raising a child: she’s got a dinner theater to hijack.

Luckily, Corky manages to grab three solos of his own before his jealous mama puts a cork in him.

These two stars — orange angel and green devil – are a pair of wild horses leading a stampede of singin’, dancin’ and salad.   In fact, there’s a big production number about leafy greens, and a shower of baked goods called “Eat My Buns.” Everybody onstage – and there are literally dozens — is having the time of their life, which is just how Orange Star wants it. And if there aren’t enough hams onstage already, leave it to costume designer George Veale to steal the show with his incredible confections. Glitter, wigs and vinyl never looked so good. 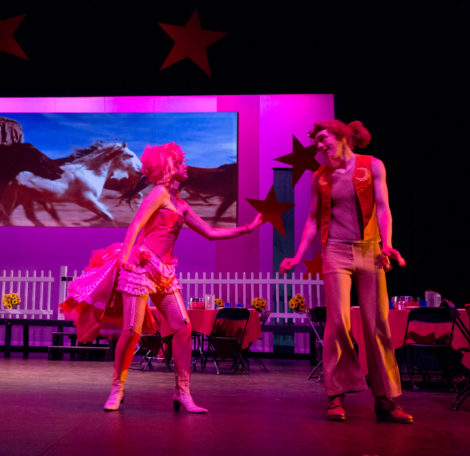 As a big show about a show that desperately wants to be big,  “Smasheroo” walks a line between young-adult and old-adult entertainment, salting in winking showbiz satire with bawdy jokes, farts and raspberries. There’s a bowlegged sheriff in day-glo orange, a pair of lovers who really can love (if you catch my drift) and “Handsome Buck” who all the gals are fighting over, god knows why. Lyrics run from syrupy C&W to “B-to-the-Itch Is Dead!” Like the master of mixed messages, Roald Dahl, this cheesecake of a show manages to astound all the kids in the front row, while showering the actual onstage diners with calories  and leaving the grownups to scratch their heads, as in “WHAT did she just say?!”

“Smasharoo” makes a rousing finale for ‘Daniel’s Art Party,’ which has given us seven (count ‘em, seven) new productions in the last three weeks. Those seven shows have ranged from nonfiction (“Leatherheads”) to carnivalesque (“Danny’s At The Fair”) but they all share a can-do attitude, plenty of music and Ken Roht’s signature brand of cockeyed optimism. We’re talkin’ a good time. At this point you’d have to say, Simon’s Rock is rockin’.