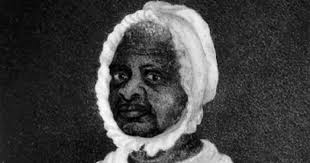 Review: ‘Mum Bett’s Minute,’ and the passion for freedom

“Any time, any time while I was a slave, if one minute’s freedom had been offered to me, and I had been told I must die at the end of that minute, I would have taken it — just to stand one minute on God’s Earth a free woman — I would.”

So declares Marla Robertson, who plays Elizabeth Freeman (Mum Bett) with dignity and eloquence, in Jesse Waldinger’s short, evocative play presented as a rehearsed reading at Ashley House on Saturday, August 16, as part of Ashley Fall’s annual Mum Bett Day commemoration of the day in 1781 when a jury of white men decided that, because the Massachusetts’ Constitution declared all men free and equal, Mum Bett must be granted her freedom and compensated for thirty years of slavery in the household of John Ashley.

In Waldinger’s take on events Colonel Ashley, Mum Bett’s legal owner, and Theodore Sedgwick, a prominent local lawyer and fierce abolishionist, have conspired to argue the case before the jury in a way that will lead to Mum Bett’s freedom.

Both Ashley, played by the amazingly versatile Andrew Joffe (who seems to be in every other play in the Berkshires these days), and Sedgwick, played convincingly by Jon Slocum, a stalwart of Town Players of Pittsfield, are men of their time, men who hold enlightened values while at the same time living with the concepts of unreconstructed attitudes of white and male supremacy.  Besotted with their own cleverness, they are slow to consider what Mum Bett may want for herself and her future, and how much she, herself, has driven the challenge to the legality of slavery. This leads to a surprising – and suprisingly satisfying! – resolution.

“Mum Bett’s Minute” was developed at Plays In Progress (a fertile workshop in Hudson, N.Y., for new plays by new and established playwrights), directed by Barbara Waldinger, produced by Town Players of Pittsfield (soon to celebrate 100 years of continuous operation), and hosted by the Trustees of Reservations.

Prior to the play-reading Tammy Denease and Joyce Davis created a “Conversation Across Time,” an imagined dialogue between two Black women associated with the advance of race relations in America: Mum Bett and Sojourner Truth.

If you missed Mum Bett’s Minute at Ashley House – and who among you didn’t? – it will be presented again on Thursday, August 21, at 5:30 p.m. and again at 7 p.m. at the Whitney Center for the Arts on 42 Wendell St. in Pittsfield as part of Pittsfield Third Thursday Events.  Don’t miss it again.

— Mark Twain
Read next: Magic and whimsy at Jacob's Pillow: 'Chalk and Soot'