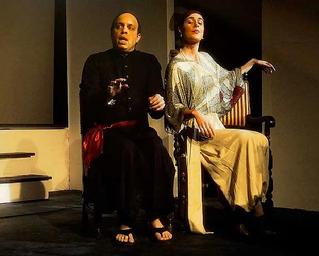 The folks at Hubbard Hall in Cambridge, N.Y., must all be very well educated and very sophisticated to boot. Nowhere in the program for their production of Tartuffe will you find the name of the playwright, nor the name of the translator. It would appear that everyone in that delightful hamlet is well-versed in 17th century French comedy and its 20th century American editions.

To make this so much clearer the director of the current production, John Hadden, has delivered a perfectly delectable version for the Hubbard Hall crowd. He has reset the time of the piece to the 1920s and, with the aid of costume designer Sherry Recinella has given a wildly sly edge to the sexy play about a man whose devotion to a new friend has swept away all other loyalties. The result of their work, the work of a perfectly competent troupe of actors and a crew of artistic designers and artisans, makes the trip to Cambridge very worthwhile even if you arrive not knowing who the playwright is — or are.

Orgon Pernelle, his second wife Elmire, his son Damis and his daughter Mariane, have come under the control of the religious zealot Tartuffe who has moved into their home and completely overwhelmed Orgon and his mother Madame Pernelle, though he has not captivated the others in the household. Nevertheless, belief in Tartuffe’s holiness has persuaded him to make the monk his heir and son-in-law even though he has promised his daughter to the man she truly loves, Valere. The play shows how Tartuffe manipulates his new mentor and how the retribution sought by the family is hard won. This 1664 comedy presages the influence of men like Rasputin on their betters. Thankfully, the Pernelles suffer much less than did the royal family of Russia 250 years later.

Peter Delocis is Madame Pernelle. He sets the scene perfectly at the top of Act One extolling the virtual virtues of Tartuffe and then disappears until the end of Act Two when his character fights the truth with all of the sincerity of cream cheese, edgy and strong and equally malleable in the face of proof. Delocis, in drag, never seems less female than his character’s beliefs: he is sincerity and not camp, honesty and not sham. It’s a wonderful performance and if Molière could see him in the role the playwright would definitely expand it for this actor.

As her son, Orgon, the company has the estimable Tony Pallone. Here is an actor who can make self-deception more than just acceptable as a concept. He manages to provide us with a harsh, impermeable man who is also surprisingly lovable as he attempts to forge a perfect future based on a veritable hill of beans. Pallone also handles the Richard Wilbur translation with ease and he is, along with Scott Renzoni as his brother-in-law Cleante, adept at acting the rhyming couplets without forcing us to hear the rhythms and the rhymes. Renzoni turns in a very capable performance never once assuming the voice or attitudes of acting. His reality on stage goes a long way to making this a most memorable evening of theater.

Aleda Bliss is bliss indeed as the wife who will go to extremes to convince her husband he has been taken in by a con-man. She also looks splendid in the 1920s costumes Recinella has provided for her. Delaney Smith is so very real as Mariane that her willingness to obey her wayward father in everything is touching, nearly tear-worthy. Even so, she makes the “modern” woman she would become very acceptable, particularly in her feisty scenes with her beloved, Valere, played well by Digby Baker-Porazinski.

Kim Johnson Turner nearly steals the play with her role as family maid, Dorine. If she sometimes speaks the lines a bit too quickly, she is nonetheless admirable in her addressing the role she plays with a comic dignity and nearly farcical set of facial expressions and body language. Jack Boggan does all right as Damis. Benjie White plays the bailiff, Loyal, quite nicely and Adam Shulman is a fine Laurent, servant of Tartuffe.

However, in spite of all the good work surrounding him, it is the performance of Doug Ryan in the title role that makes this play work so well. Here is a man who can say one thing, mean another and look entirely as though he is somewhere else saying something else. The fun in watching him react to the others is matched by the confusion and delusion that surrounds all of them every time Ryan opens his mouth. I have enjoyed this actor before, but this is the role through which his work from now on will be judged. His imaginative use of personal space, his decisive leer and incisive sneer subvert the poetry of the play and make it a contemporary work instead. Seventy-five percent of the enjoyment of this ancient work is due to his interpretation of the title role.

Kristoffer Ross’s unique set keeps the play in a distant time and place, a family home of centuries gone-by. Calvin Herzig-Anderson’s lighting is most effective. John Rosmis’s use of music and sound effects is fun, if occasionally bewildering. All of the creative forces on this play have worked well together with director John Hadden who has obviously had a wonderful time working on this show. He has a handle on this period stuff and it pays off in a big way.

So, join the bright and intelligent folks in Cambridge, N.Y., for an evening of pure delight and get up to speed with them. Obviously, they know what they want and they get it at Hubbard Hall.

Tartuffe plays through March 15 at Hubbard Hall, located at 25 East Main Street, Cambridge, NY. For information and tickets contact the box office at 518-677-2495 or go on line at www.hubbardhall.org.