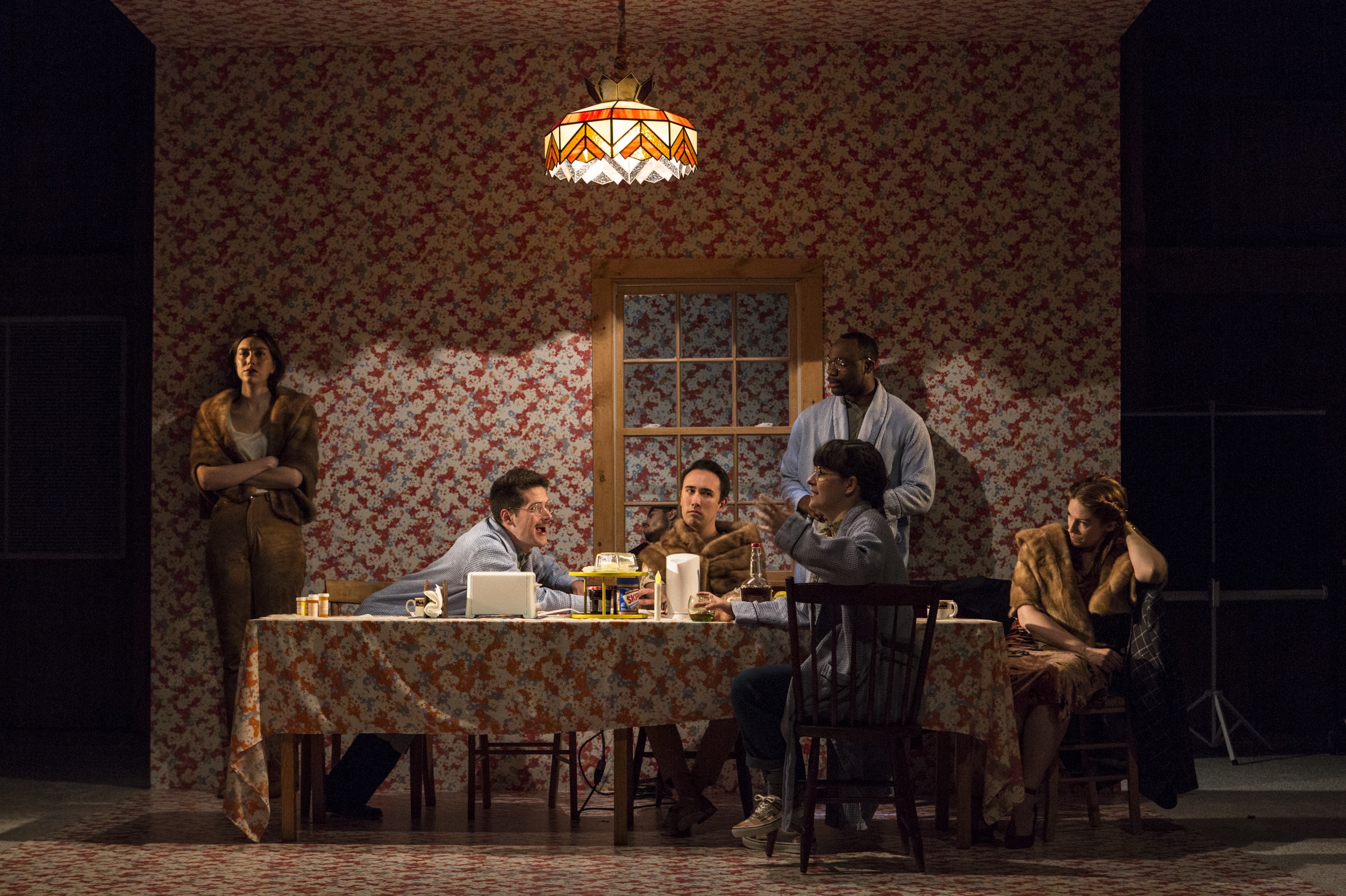 Let’s identify the particulars at the top, so we can dive deep into the play, itself. “Minor Character – Six Translations of Uncle Vanya at the Same Time” runs through Sunday, June 25th at Sharon Playhouse, 49 Amenia Road (Route 343) in Sharon, Conn.. There are 2 p.m. matinees on Thursday, Saturday and Sunday … evening performances Thursday (7 p.m.), Friday and Saturday at 8.

In the event that you need specific reasons to make your way through the countryside to the venerable Sharon Playhouse, then feel free to read on. It only gets better from here.

Morgan Green, a brilliant young director, teamed up with two of her Bard College classmates, Madeline Wise and Milo Cramer, to form New Saloon a theater company with a flare for the “accessibly imaginative.” That’s our term, not theirs … but it sums up the experience of being part of “Minor Character.” The creativity of the presentation is evident in every line, yet there is room to understand the ebb and flow of the play and to celebrate the talent presenting it.

After a very successful run as part of The Public Theater’s Under the Radar Festival in New York, “Minor Character” has been invited to occupy the intimate Bok Gallery Theater by newly appointed Sharon Playhouse Artistic Director, Johnson Henshaw. His instincts are as sharp as the play is engaging.

Confounding as it might seem that the evening will be spent hearing multiple translations of Chekov’s 118-year-old play, it takes all of 30 seconds from the beginning of the first speech to understand how refreshing, funny, engaging and simply entertaining the performance will be.

There is no question that the development process to create the final script of “Minor Character” must have taken months of time, copious amounts of adult beverages and unbridled dedication. What Morgan Green has done with that script and what the actors are capable of creating with her guidance and insight is a theatrical experience unlike any you’re experienced.

Milo Cramer and Madeline Wise are joined on stage by Jamal Crowelle, Fernando Gonzalez, David Greenspan, Kenney Kanagawa, Caitlin Morris and Anne Troup. To use the old cliché that they work together “like a Swiss watch” is only part of the wonder of the performance. To single out a few of the performances would be to minimize the work of the others. They’re not all good. They’re all great.

When they sing (an addition to Chekov’s work that is breathtaking) the eerily beautiful score by Deepali Gupta is both haunting and, at times, hilarious.

When they move around the performance area (the audience sits on risers, the actors work on the floor) the choreographed moves are almost balletic.

When they use their estimable skills at physical humor and dramatic timing, the audience is with them, line for line, step for step.

The original story behind “Uncle Vanya” is fraught with the petty jealousies and intrigues of the Voynitsky Family. There’s the retired professor and his new young wife, who really belong in the city … his daughter, her maternal grandmother and Uncle Vanya. They harbor and express all of the characteristics of a normal, contemporary family – greed, jealousy, anger, fear, resentment, lust – and make us laugh when they give those characteristics full expression. St. Petersburg, Russia or St. Petersburg, Florida. It doesn’t seem to make much difference.

To add to the family mix, there is the local doctor, an old nurse and a neighbor who manage to bring unrequited love, passion and the fear of de-forestation to the mix. Again, in the depth of emotion, there is humor – beautifully delivered and perfectly timed.

“Minor Character” is a short play – under 90 minutes – which allows time after the performance for the audience to interact with the creative team whose work they have just experienced. Artistic Director Henshaw puts great stock in the conversations that emanate from a performance, so time is given (all voluntary – there’s no need to feel like you have to stay) for the inevitable questions to be asked and answers to come from the creative team who raised the issues in the first place.

If your search for some Sunday evening entertainment took you to your television set on June 11th, and you decided to watch the “Tony” Awards, it would have been impossible to miss the sheer brilliance of the talent on stage during the snippets of the nominated plays. “If I can make it here, I can make it anywhere” is no joke. Being an actor on Broadway is reserved for the supremely talented and dedicated.

Journey to the Sharon Playhouse for “Minor Character” and see that kind of talent “up close.” The audience sits on three sides – only 88 seats – and the radiated talent of the acting company is both proximate and infectious. These are Broadway-caliber actors led by a Broadway-caliber director. Morgan Green and company may be in Sharon for the summer of 2017 (she will also direct July’s production of Caryl Churchill’s “Far Away” and the August presentation of Meredith Wilson’s glorious “The Music Man”) but they will ultimately find their ways to “the great white way,” without question.

MINOR CHARACTER, Six Translations of Uncle Vanya at the Same Time. at The Sharon Playhouse, 49 Amenia Road, Sharon, Conn. The play runs through June 25th. For information consult The Berkshire Edge calendar, or get information and tickets at 860-364-7469, www.sharonplayhouse.org.