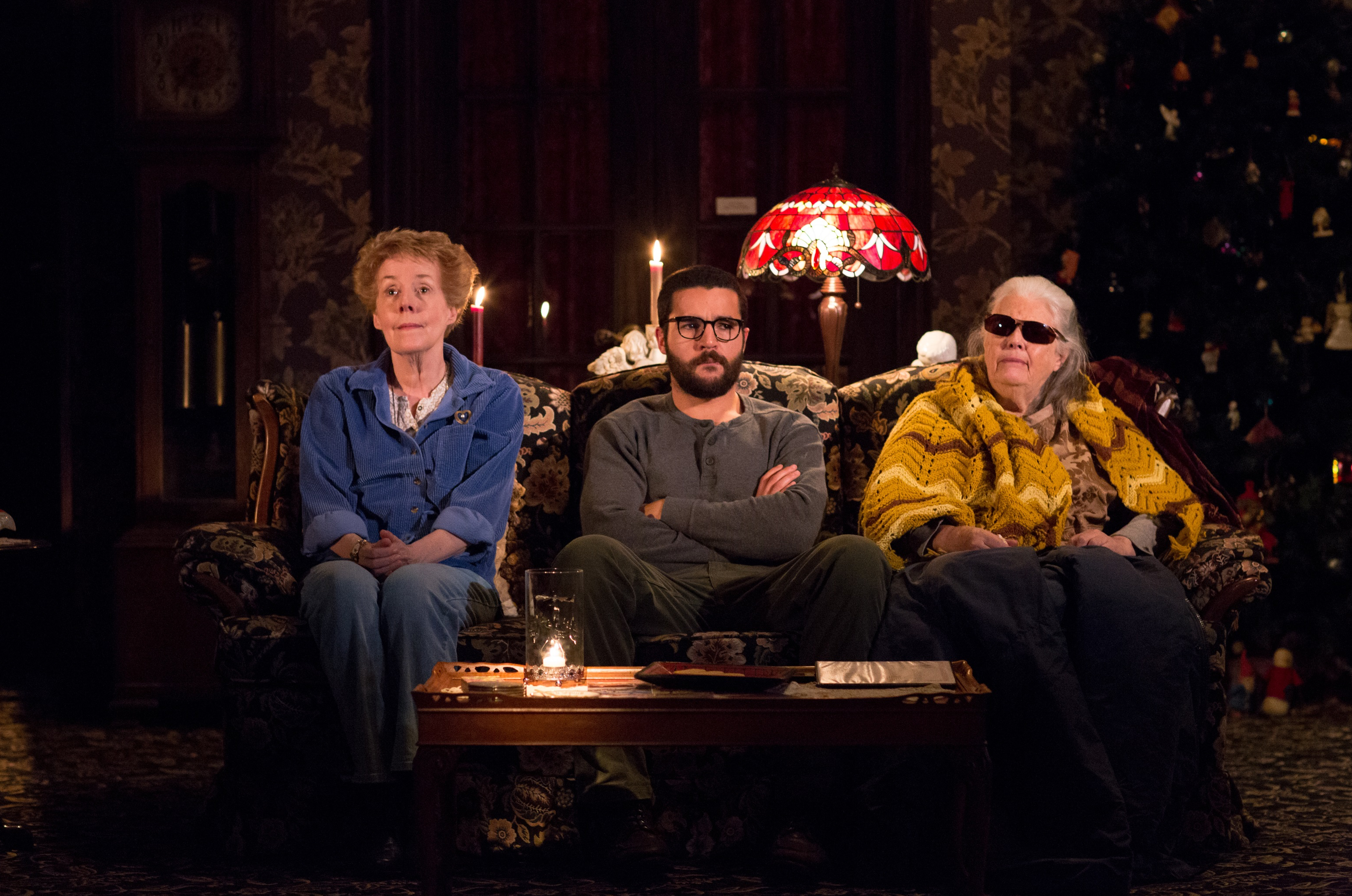 “I’ve no idea how people decide to stay or go.”

When a playwright emerges from the masses there is often a fanfare of some sort. Winning the Pulitzer Prize is just such an accolade. Annie Baker won the award last year for a play entitled “The Flick,” a three-character play set in a dying movie theater in central Massachusetts. She had already authored, and successfully had produced, a number of other works including “The Aliens” which I saw and reviewed earlier this season in Housatonic, Mass., in a tunnel. “John,” which is her latest work, is currently playing in New York City at the Signature Theatre’s Irene Diamond Stage, one of the largest off-Broadway houses, located at The Pershing Square Signature Center on 42nd Street and 10th Avenue. “John” is unlike anything I have ever seen before, and that’s really saying something considering all that I’ve seen in my long theater-attending lifetime.

A four character play, unless you consider George a character or John, for that matter, that takes place in a bed and breakfast just outside Gettysburg, Pennsylvania, in the weekend following Thanksgiving, it is the story of a couple whose relationship is suffering difficulties who take a short vacation detour to experience the Civil War battleground that seems to call out to most intelligent people at some time or other. Elias Schreiber-Hoffman and Jenny Chung arrive later than expected on an especially cold night at the residence and B&B owned by Mertis Katherine Graven who likes to be called Kitty although no one ever seems to do that. The house is decorated for Christmas and the setup is so elaborate that one could believe it always looks like this. Mertis, or Kitty, takes the couple to their room on the third floor and one of the first scenes is played out of sight and out of hearing at the top of the theater’s stage.

That would seem odd if the opening of the play hadn’t already set the bar fairly high for oddness. Actress Georgia Engel, who plays Mertis, began the play by stepping out onto the apron of the stage and physically pushing the grand drape — the front curtain — apart and open in full house lights, then exited through an upstage door before the houselights dimmed and the stage lights adjusted for the play. This, and its reverse, happened five more times in the three-act play. The device establishes for the audience its own presence within the scope of the play. We are welcome guests in the living room, hallway and breakfast parlor (known as Paris) of the place although we never actually set foot within it. Still, we are welcomed. At the end of Act Two Lois Smith, playing the blind Genevieve Marduk, steps out through the same closed curtains to halt the departing audience at the start of the second intermission. She has a speech to make and she is making it to a group of people who have stood up, left their seats, and moved on.

These and other devices seem to be ploys to bring the audience closer to the characters in the play, a good thing to do since the strangeness of each of them could be alienating. Author Annie Baker has some other tricks up her sleeve, some of them familiar. Like Harold Pinter she is a naturalist. She believes that people do not prepare to speak, they just do it. She indicates pauses and silences and, although a copy of her script was not available, there is a printed indication in the script of “The Aliens” that pauses and silences take specific time to perform and that this is “important.” Pauses are “at least three seconds long.” Silences “five to ten seconds.” If you time these out for yourself you will have a pretty good notion of the sound of this play. The silent moments take up about a third of the play which runs three hours and fifteen minutes including two ten minute intermissions which ran longer: fourteen minutes and twelve minutes.

With all of this told, you should understand that the play itself is fascinating. John, the title character, is alluded to only and he comes as a surprise. He is behind the entire interaction between Jenny and Elias. John is also a possessor of souls and living beings and is the creator of madness on a variety of levels. He may be multiple men or may be only one. He may have power of player pianos, doctors, nurses, attendants, wives, cell phones, lovers, dolls; it is hard to know for sure. What is certain about him is that “everyone knows someone named John” and everyone is a sacred trust to someone else. That’s all the play wants you to know. Or perhaps there is something more to discover.

Georgia Engel proves once and for all that she is not the ditsy sort of character she has played on so many television shows and on Broadway in plays such as “The Drowsy Chaperone.” She has played variations on that character so successfully over the years that our expectations of her are generally easy to achieve. In this play she is a complex woman with so many facets gleaming in the night that she dazzles. Her depths are amazing and as she reveals more and more about her life and her relationships she becomes, simultaneously, the beautiful witch of the north and a woman on the verge of a nervous breakdown. Her performance is nothing but brilliant. Mertis lives in the body of Ms. Engel and in her mind and in her heart and in her hesitant walk and in her smallest gesture. To have not seen this performance would have been a major mistake.

Hong Chau is an under-the-top Jenny Chung. In one scene she is all affection and in another an immobilized living statue. Her physical versatility is wonderful and her repressed emotional states are classic. Chau makes Jenny more intriguing than her early scenes would indicate she could be and by the end of the play we find ourselves questioning all of our earlier reactions to Jenny. If there is a craziness within the characters, that is exemplified in the low-key playing of Chau. Even her loudest reactions are somehow subdued by a conscience that is self-questioning.

Elias Schreiber-Hoffman is a complex character brought to vivid life by Christopher Abbott. Elias is the sort who bumps into himself coming and going. He never knows where is or who he is or what is going on around him. He is suspicious and self-deprecating. He is loveable and loving. He is often standing outside himself staring inward and seeing only darkness and emptiness. He is self-loathing and yet respectful of others in the same breath. Abbott does an extraordinary job with the contradictions in Elias’ character. He puts himself down for his Jewish traits that no one else comments on or even sees, and yet he is as fair and impartial as a man can be about other people’s eccentricities. Abbott knows just how to play the tiny conflicts that are Elias. He does it so well that quixotic emotional shifts seem absolutely reasonable.

Lois Smith makes her smaller role into a star turn. When she is on stage she holds center no matter where she may be sitting. There is something so comforting and compelling about her voice and her body. She moves with sensuality that is not characteristic of Genevieve and yet without this quirk the character would be ordinary and excusable. Her appearance on the stage in the second act changes the play emotionally and her handling of the situation, aided and abetted by Engel’s Mertis, turns what could be turgid into something magical. Between the two women it is as though the spirits of Helen Hayes and Katherine Cornell had gathered to act one more time in the roles that got away from them during their lifetimes.

Director Sam Gold has taken this material, these characters, the situation, and made a large, Vienna-Finger encrusted wasteland of wonders. Without knowing how much of what we see is actually in Baker’s script we must assume that the director, who has worked on several of her plays, has added elements of his own creation to help bind the ingredients of this dark confection together. The play is a dark comedy. It inspires a lot of laughter but the tenor of the piece is dark and foreboding and mysterious. Gold must be very comfortable with all of that telescoped into a single play for the outcome is pretty close to perfect.

He is given a gold-star production to work with: a remarkable set designed by Mimi Lien, stunningly effective lighting, much of it interior emanating from the set itself created by Mark Barton and a sound design set of tracks by Bray Poor that perform background, foreground and mid-air. Asta Bennie Hostetter’s costumes suit the characters admirably.

Presented for a very short run, but extended (thankfully, so I could see it) through the end of this week, the play is selling very well and will hopefully find another home for this entire production, just as it is. Oddness, Pinter pauses, and other theatrical gimmicks aside, this is a most wonderful play, worthy of its three plus hours of performing time. The time just flies by unnoticed.

John plays through September 6 at the Pershing Square Signature Center, 480 West 42nd Street in New York City. For tickets and information call the box office at 212-244-7529 or go on line at www.signaturetheatre.org.