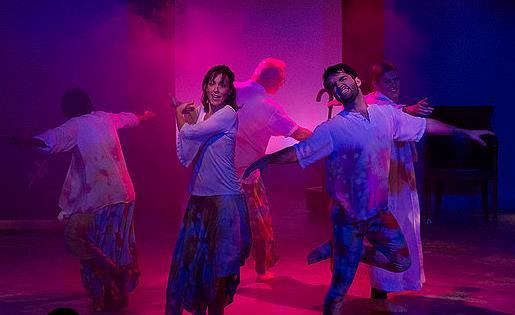 (Seen on an all Episcopal day — this play and the Fauré Requiem beautifully performed at Trinity Parish, Lenox, featuring the glorious vocalism of John Cheek and Laura Whyte with the excellent organ playing of Tim Weisman, conducted by Anita Stuart, in an Episcopalian Requiem Mass. From laughter to emotional construct, the day was an ideal mix of the “presence of God” and the presence of Womankind.)

If there were anything wrong with situation comedy we’d all stop watching them. Television has transformed the form into half hour collections of mini-bites of moderate humor with here and there an actual laugh; we watch these compulsively, hoping for enough laughter to phase out our daily, work-a-day strife. The theater, on the other hand, has given us comedy situations that provide us with ample reason to get lost in other people’s lives presented with genuine humor. From Shakespeare’s “The Comedy of Errors” through Joseph Kesselring’s “Arsenic and Old Lace” or Kaufman and Hart’s “The Man Who Came to Dinner” to last season’s big Broadway hit “It’s Only a Play” by Terrence McNally we are never without a play that brings us joy and message combined in a sit-com. Now WAM Theatre presents us with “Holy Laughter” by Catherine Trieschmann, a play that may well join the other plays mentioned above as a very revivable comedy play whose situation touches us, enlightens us and amuses us — all at the same time.

A recently ordained female Episcopalean Priest, Abigail, has been sent to a congregation that needs a leader in the worst way. Its attendance has crumbled away and the physical church is taking that same path. The church is principally held together, and held down, by a wealthy parishioner who heads the vestry, Lloyd (if this sounds familiar, TV watchers, think “The Vicar of Dibley”). Abigail suffers from youthful angst and her early sermons suffer from her linguistic oddities. Even supported by the Bishop, Victor, she finds fault with her own efforts. She tries to support the emotional and financial needs of parishioners Martine, Noah and Esther while suffering the slings and arrows of Myra, Vivienne and Sam. Her life is anything but easy and she misses the freedoms she enjoyed before ordination, freedoms that ultimately slip in and catch her off-guard (think the Loretta Young film “The Bishop’s Wife.”). Yes, this play has many points of reference to earlier comedies. It still has enough that is its own to make it its own situation comedy.

Dana Harrison plays Esther, the last remaining hippy, who believes in the church, good works, herself and God, in just about that order, but who also cherishes her freedom to choose which of those beliefs to honor and when. She is emotionally flaky, this Esther, and her devotion to the care of a refugee family from Burma brings her little happiness and a few itchy spots. This is a strangely wonderful character and Harrison brings her to life in marvelous ways. She also plays Myra, a woman with an agenda, a veritable Shaklee saleswoman who tries to use offers of a supportive friendship to her best advantage. The total opposite of Esther, Harrison gives her an open-handed honesty that makes her a truly offensive human being. It’s terrific to see Dana Harrison in new roles that she can explore and create, to watch her bring the comic characteristics of two such different women alive. This is a lovely performance, or pair of them. It’s good to have her on the stage again.

Amie Lytle has an inner energy that seems to drive Father Abigail — or is it Mother Abigail, I’m never sure — onto a carousel that spins out of control. The priest has definite goals and they seem to be circular, always leading her back to where she began without having made any significant progress. That is, until she meets Sam and suffers the consequences of being a human being with human needs and feelings. After that she is seemingly holding on to the upright bar with one hand and her feet flying off the platform as the merry-go-round revolves and revolves until we’re all dizzy along with Abigail. That is the intensity the play requires of its central character and it is what Lytle gives us in this production. It’s an amazing, funny “spin” on the traditional role of Priest at the center of the action.

Benjamin Zoey plays Noah, whose music and dance bring him infinite joy. Noah is a confused young man who requires guidance and even with it cannot find the way out of his small, entrapped life. He also plays the seductive and selfish Sam who loses any and all advantage he might have through his sloppy, unsentimental selfishness. Sam is perhaps the weakest character in the play and thankfully we don’t deal with him often. He is also the only character who adds nothing to the comedy of the play which makes him almost as important as the unseen character, God himself. However, Noah is a gem and Zoey makes him indefatigably delightful.

In her two very different characters, Martine and Vivienne, Kimberlee Monroe displays an enormous talent for caricature. Martine is a Haitian who uses the church as a platform from which to raise money for a relative who cannot avoid disaster, constantly losing every penny she sends to him back home. Vivienne is a charismatic preacher who plots to take down the Episcopalean Church one stone at a time (she is one of those Lionel Barrymore types from the  film “It’s a Wonderful Life”). Monroe makes both of her women into fabulously amusing characters and she seemingly could play every role in this show if a one-woman edition were possible and still keep it funny.

Lloyd of the Vestry, played to perfection by Ron Komora, is simply wonderful. He plays the officious creature in control of past, present and future, but truly not in control of much, with a sharp tongue and an attitude that stretches across the room, outside the building and way over yonder. The shock of that is how not over-sized is his playing. He always feels real in his over-the-top pronouncements. He always seems to be genuinely concerned. It is the containment of Lloyd’s oversized ego that is at the base of Komora’s interpretation of the man and it is what gives him both his reality and his amusing aspect as well. Playing Bishop Victor, so supportive of Abigail and her agenda and her needs, he is just the opposite. Like his fellow players he is adept at keeping his two characters specific and in never mixing even their facial expressions. Komora is perfect in both roles. When Lloyd’s Scrooge-like mentality is turned into something finer it is still Lloyd we see and hear; we just like him better.

The play is a well-wrought piece being given a developmental workshop viewing by WAM Theatre under the excellent direction of Megan Sandberg-Zakian who seems to know exactly how to present this young play. Juliana Von Haubrich has created an excellent set and worthy props while Lauren Gaston has shown us the inside of these characters through her fine costume creations. David Roy has provided appropriate lighting and Brad Berridge has done well with his sound design. Choreographer Kimberly Ciola makes magic of the finale of the play and moments that precede it. Altogether it’s a fine show, worth enjoying and laughing through, just like the finest situation comedy plays of the past and even a few we’ve seen on the small screen.