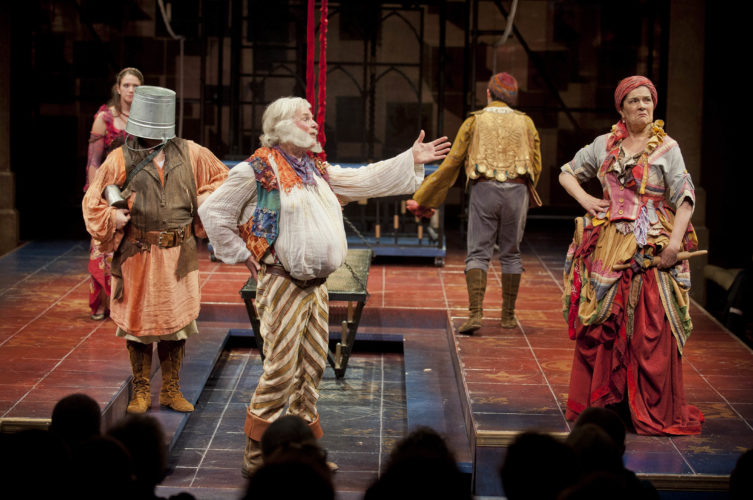 Editor’s Note: Two Henry’s, one play. So why not have two reviews? This is J. Peter Bergman’s; the other (Review II), by Bob Goepfert. We leave it to our readers to decide which one had it right. But first, you have to go see the play at Shakespeare & Company.

“It’s always better here in Gloucestershire than in the Berkshires.”

Is it possible for history to be amusing instead of bemusing? At Shakespeare and Company in Lenox, Mass., the answer, currently, is “yes, yes, a thousand times yes!” Jonathan Epstein has adapted two of Shakespeare’s history plays “The First Part of King Henry the Fourth” and its sequel “The Second Part. . .” into a single evening of hysterical theater in which what appears to be the first part of King Henry the Fifth is played as much for the laughs that its characters bring to the stage as for the history it reveals. Had Queen Elizabeth the First seen this version she would have demanded that Shakespeare write a play in which Sir John Falstaff held the lead role — oh, wait, she did that anyway; that’s “The Merry Wives of Windsor.”

Paring away the two five-act plays into a single two-act edition (saving us about four hours of playing time), Epstein has reduced the history of Henry and his sons to a three hour edition that tells their story with a concentration on  Prince Hal’s odd friendship with an older knight whose ribald behavior incites both women and men to a furious state of mind. Moving Falstaff more forward into the light rather than keeping him a secondary character alters our vision of the history of ancient Britain while maintaining the brilliance of the original author’s vision of the way things once were. Epstein’s Henry IV becomes a supporting player in his own story and Hal, or Henry V, becomes more the focus of both his father’s activities and those of the boy’s companions.

Some characters have disappeared; some have been combined. Women’s roles have been enlarged, it seems, or totally invented by Epstein. In some cases women have replaced men in roles of major significance. New roles have been created for men that encompass motives lost with their original characters. This is not so much an editing job on Epstein’s part as it is a rejuvenation through retelling the story from a different viewpoint. The work is risky and the result is wonderful. It is, in its way, as oddly qurky as the show with which it is sharing the Tina Packer mainstage this month, “The Complete Works of William Shakespeare, Abridged.” Both plays have put classic Will S through a mangle and a wringer and come out with a clean, perfect overview of the 16th century author’s work.

Not content with merely rewriting Shakespeare and directing the play, Jonathan Epstein also plays the aging king of England whose many sons are intent on the future of the monarchy. His first appearance seems to present the image of a dead king and it takes a full three hours to bring us back to that initial view of him. That he moves from a single bed to a double bed in the telling of the story is as interesting as what happens in the time between those images. For the most part we are absorbed with the story of his son, Henry Prince of Wales, or Hal, played to the teeth by Henry Clarke.

Clarke has a vitality and a smile to go with it that makes him a most engaging character. He is a graceful actor who is seen either half-naked or in a shirt that doesn’t leave much to the imagination and fortunately for him he is an actor who is as fascinating as is his youthful body. He holds our attention no matter what else is happening around him in the play. This is Clarke’s fifth season with the company, but in spite of playing other leading roles, this is the first time he has truly stepped out of the ensemble and into the soft spotlight of a focal role. It is clearly the right move at the right time. He is so good as Hal that he actually becomes the man you root for, even at the end of the play when a decisive alteration takes place and in spite of his turning his back on old friends and mentors he is still someone you root for. And you are equally glad that Falstaff has his own play in the future for, as Clarke plays the final scene with him, Hal’s change of heart is potentially devastating.

Malcolm Ingram’s Falstaff is an old friend on this stage. He has given us Shakespeare’s premier buffoon before but this time around Sir John is very much to be cherished. The performance in this “new” play is both silly and sad. Ingram shows us the man at his most vulnerable and not even Orson Welles’s Falstaff in the film “Chimes at Midnight” (which did much what Epstein’s play does in combining the two Shakespeare plays) can touch the humanity that Ingram brings to the stage now. His John Falstaff is a man alive to possibilities, self-deceived as to his place in the canon of history and self-abused in his reliance on friendships that are surface relationships at best. He is a very moving human being in Ingram’s talented hands and this Falstaff will be hard to beat in the seasons to come.

Ariel Bock in the enlarged role of the innkeeper, Mistress Quickly, is delicious and charming and funny as her demands on Sir John grow toward an upper class future that she believes is hers to command. Bock is also a winning Queen Joanna of England, a role that doesn’t exist anywhere in Shakespeare’s works. She takes over the role of Justice Silence and playing a deaf old person she has even more comic time on the stage and she is delightful.

Benjamin Epstein plays Prince John of Lancaster, and Francis, a barkeeper’s apprentice equally well. Timothy Adam Venable gives Hotspur, or Harry Percy, a fine run for role of future king and he is funny as the swaggerer, Ancient Pistol (who by Henry V is married to Mistress Quickly). Kevin G. Coleman is a handsome Earl of Northumberland and a quite remarkably silly Justice Shallow. Kelly Kilgore is a dynamite Doll Tearsheet (a lady of negotiable virtue) and is a charming and moving Kate Percy as well. Johnny Lee Davenport is excellent in both of his roles (neither of which may be found in Shakespeare’s plays) and Robert Lohbauer plays the Lord Chief Justice, a part that has grown backward into Henry IV, Part One, and gives the actor a fine place in the company of players.

Epstein himself as the titular King is excellent. Always adept at playing men of many sides, many moods, his creation of the new Henry IV is just that. He moves back and forth from happiness to gloom, from warrior king to complacent monarch. Epstein plays these changes with a totally understandable manner and makes every scene he plays one that holds the stage with strength and vigor. This may well be his finest work in years on the Shakespeare and Company stages, surpassing his excellent work in the recent “Heroes” on this property.

Arthur Oliver’s superb costumes make the oddities of the production even more intriguing. In the director’s notes, Epstein mentions that the only surviving image of a Shakespeare play presented in the author’s time show a confusion of period in the costuming. Epstein and Oliver manage a similar confusion in this production with classic costumes with odd touches including pockets containing cell phones and other time-bending peculiarities. Oliver’s fabrics and colors add to the show’s wonders and with Matthew E. Adelson’s very theatrical lighting effects and Travis George’s important alterations to the stage playing spaces this production is almost as intriguing for its physical values as it is for the players’ takes on their characters.

This show has one of the shortest runs of any play on the S&Co’s stages this summer, so take advantage of it while it’s here. Even if they bring it back in a few seasons it won’t have the impact it is having right now. By then it will be old hat and expected and not the remarkable achievement that it is right now. This is Jonathan Epstein’s moment of glory, and he deserves every kudo he is getting from this writer right now.