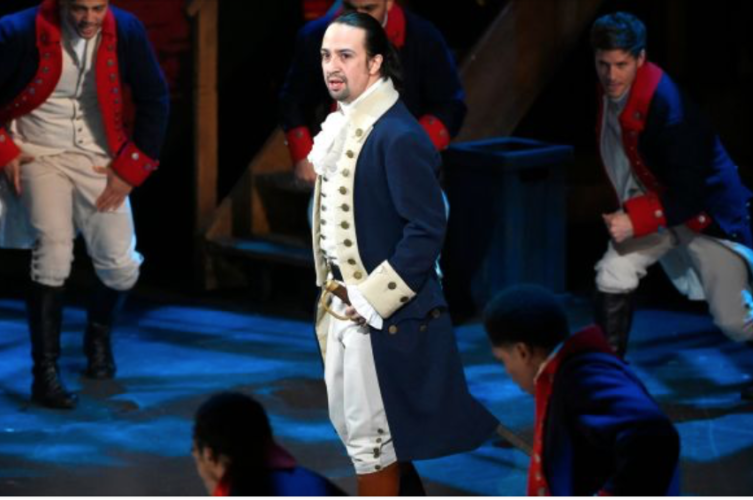 Beyond the Disney hype surrounding the premier streaming of HAMILTON: An American Musical on the July 4th weekend and given how much has gone down in the last months with the murder of George Floyd and the force of Black Lives Matter, Lin-Manuel Miranda’s watershed musical has renewed and revitalized relevance. Resurrected from Off Script with Dan Dwyer‘s archives are my thoughts about it based on my first viewing, during the first week of previews at The Public in late January 2015, which now seems like a much simpler time, so long, long ago.

There are rare occasions in the theater when one sees something so totally original, one knows one’s witnessing something historic. Such is the case with Lin-Manuel Miranda’s “HAMILTON” at The Public Theatre. This powerful, audacious musical biography of founding father Alexander Hamilton, who is affixed in popular history for being felled by the duelist bullet of Aaron Burr, not only illuminates the historical origins of the American national identity with startling clarity heretofore unseen in musical theater but also rockets the musical genre into a bold, definitively 21st-century, multi-cultural expression of language and music. Members of the Pulitzer committee will no doubt be visiting The Public’s Newman Theater soon.

There are few musical theater antecedents for “HAMILTON.” It reduces 1776, covering some of the same historical period, to bygone, dry-as-dust, dinner theater. It owes some heritage to John Weidman and Stephen Sondheim’s “Pacific Overtures” and “Assassins,” which used historical incidents to examine, respectively, imperialistic and violent elements of the American psyche. Mr. Miranda tackles something more fundamental in “HAMILTON.”

Taking the most scholarly work available — Ron Chernow’s biography, Alexander Hamilton, as source material — Mr. Miranda tells Hamilton’s life story in rap, accenting that with idioms, poetic flourishes, and pop-cultural similes, and at times even incorporating parts of the historical record, like Washington’s farewell address. With that, Hamilton, the man, warts and all, becomes alive, the voice of America today.

Indeed, Hamilton was as unlike his colonial peers as are young New Yorkers now. He was the only founding father who was an immigrant (born in the Caribbean), orphan, bastard and a self-made man who made his own way up the ladder. The cast — with one exception, all 20- or 30-something’s — reflects urban youth of today — Anglos as slim minority, more Black, Latino, and mixed — and projects what the whole country will look like in a few decades. The cast of “HAMILTON” bears as much resemblance to an Eisenhower-era Eurocentric melting pot, as that population did to the WASP, land-grant legatees of colonial America. Mr. Miranda’s mixed casting is fundamental to one of “HAMILTON’s” broad themes: real American values that define our national identity endure beyond the WASP origin of the country.

Mr. Miranda interprets Hamilton’s life through a marvelous collaboration with many who worked with him on 2008’s Tony–winning “In the Heights.” Still, the creative powerhouse is Mr. Miranda himself. Playing Hamilton (and on stage for most of the play’s three hours), Mr. Miranda has also written the book and lyrics, composed the music and co-arranged it with Alex Lacamoire. The score ranges from hip-hop to pop ballad, with strains of jazz and ragtime and mixes these together in a seamless flow of nearly three dozen musical sequences, sung through to operatic effect. Having seen the play just once (I’m returning for sure), I’m recalling at least half a dozen stunning musical numbers especially “The Schuyler Sisters” in Act 1, where an exquisite Rennee Elsie Goldsberry as Hamilton’s adoring prospective sister-in-law nearly takes the roof off in a rousing anthem of unrequited love.

It’s unfair to single out any one member of the uniformly superlative cast but most satisfying is the youthful camaraderie established in Act 1 among Hamilton and his band of revolutionary brothers: Lafayette (Daveed Diggs), Hercules Mulligan (Okieriete Onaodowan) and John Laurens (Anthony Ramos), each of whom does double duty as Jefferson, Madison and Hamilton’s son, respectively, in Act 2. There’s plenty of comedic relief, most notably from Brian d’Arcy James as King George who chastises the independence aspirations of his colonial subjects with foppish, acidic wit in “You’ll be Back.” Leslie Odom Jr, as Burr, strikes the perfect tone of both friend and enemy to Hamilton, playing his fateful antagonist and also part narrator, with shades of the Leading Player from Pippin. Christopher Jackson cuts a thoroughly commanding figure as General Washington. The breakout performance explodes from rapper Diggs who camps it up as a wise-ass Lafayette and nearly steals the show with a sly satirical interpretation of the elitist intellectual Thomas Jefferson.

Director Thomas Kail propels Hamilton’s saga forward like a page-turning historical novel. Integral is Andy Blankenbuehler’s muscular choreography that incorporates everything from breakdance to modern ballet performed by a super-charged ensemble that serves as Greek chorus throughout.
The staging is amazingly kinetic but it’s the play’s characters who give “HAMILTON” its emotional force. Besides Hamilton’s public relationship with Burr around which the narrative pivots,” HAMILTON” astonishingly realizes fully two personal relationships, too — the unrequited love that Hamilton’s sister-in-law Angelica Schuyler holds for Hamilton and the unconditional devotion of his wife Eliza played by an elegant Phillipa Soo who, in a stirring aria movingly delivered near the play’s end, commits to his legacy, despite the public indignity of Hamilton having had an illicit affair with another woman, the first sex scandal of American history.

Mr. Miranda infuses the historical record with vibrant contemporary political resonance without ever slipping into didacticism. Hamilton’s design for the Treasury and the U.S. banking system is laid out, as is the economic divide between the commerce-based northern colonies and the agricultural-based southern ones — and a little thing called slavery — that foretells the Civil War. How Hamilton became chief author of the Federalist papers and the debate with Jefferson’s Republicanism is made plain, and – yes — all this is in rap. Indeed, there’s more intelligent explication in “HAMILTON” about the philosophical conflicts between individual liberties and governance at the basis for the Republic than one will hear in floor debate in the U.S. Capitol. Members of Congress, get your asses down to The Public.

Far beyond being just entertaining history, HAMILTON is a grand, patriotic celebration of American identity that plumbs both the nature of history and the nature of story-telling. “HAMILTON” constantly presents the question through rap refrain “Who tells your story?” With “HAMILTON,” Lin-Manuel Miranda claims the forefront in musical theater storytelling with extraordinary authority, dramatically reminding us with this milestone musical that our national identity lives and breathes as vitally today as it does in Hamilton’s own story.