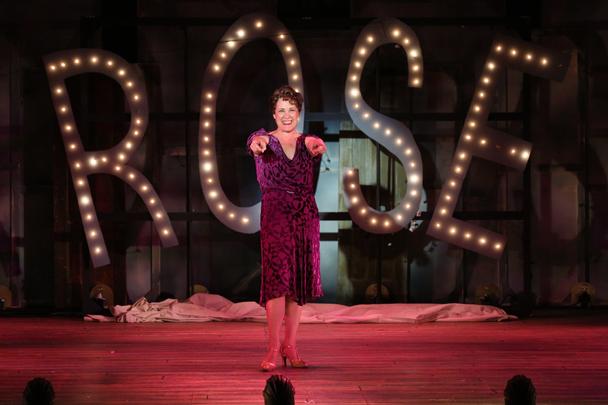 Gypsy
Book by Arthur Laurents
Music by Jule Styne
Lyrics by Stephen Sondheim, based on the memoirs of Gypsy Rose Lee
Directed and choreographed by Richard Stafford

“It takes an awful lot of butter to get me back in the frying pan.”

Rose Hovick is a woman with a mission. The mother of two children, the survivor of three failed marriages, and the daughter of a cheapskate moralist, she forces her children onto the Vaudeville stages of America in the 1920s and 1930s, forging two unforgettable career women: the actress and singer June Havoc and the Burlesque star of the Minsky circuit Gypsy Rose Lee. Rose is single-minded and bitter. Having been deserted by her own mother in childhood, she has defined motherhood as a clenching, manipulating fiction of love serving her own singular purpose. Not your typical musical heroine, Rose is a dynamo and as played in the past by Ethel Merman, Rosalind Russell, Tyne Daly, Bette Midler, Bernadette Peters, Patti LuPone, and Angela Lansbury she has been hard and bitter and controlling and, ultimately, winning emotionally.

In the new production, on stage at the Sharon Playhouse in Sharon, Connecticut, the role is assumed by wonderful singing actress Karen Ziemba. Under the odd misdirection of Richard Stafford, Ziemba plays against type. She gives an unusual softness to the character which makes it difficult to understand how her motivation alters the reality of her world. When she steals, when she pushes and shoves her daughters forward, when she battles with theatrical moguls, when she determines her awkward daughter will be a star no matter the consequences, Ziemba does all this with a smile and a sweetness that causes her character to fade into a soft-focus view and to become unreal. Her final sweep into the lost reality that Rose suffers normally is left without realizations as she never comes to grips with the deep-seated loss of her own parent. This takes the show down a path from which it can never recover. Entitled “Gypsy” for daughter Louise’s stage name as a stripper, the show has never centered on her but always on her mother who is a stage gypsy, moving from theater to theater, from show to show, plunging ever onward in a career that never focuses the spotlight on the gypsy. That is lost in this current production.

It is an unfortunate loss, a bad choice from the start. It is almost as though, in making the show his “own,” the director has betrayed the author’s intentions and left his company without the anchor that makes this show so solid an institution in the musical theater milieu. On opening night, a time when a company is keyed up and excited and gives what could be the finest performance of its run, the show felt tired and defeated and prematurely old. Designer Jack Mehler seemed to not know what the show was about and light cues seemed not to work. Awkward bumps of moving set pieces left its viewers with the odd sense of seeing a high school play instead of a professional presentation. In fact, I have seen high school productions of this show that were far more polished and professional, which surprises me after the past two seasons of excellent work on this stage.

Music Director Joshua Zecher-Ross, usually so reliable in these events, seemed to be rushing his inexperienced instrumentalists through many numbers. Melodies faded rather than soared. The over-miking of the band made every error in the playing so much more noticeable. The balance between musicians and singers was sometimes awkward with the voices lost in the texture of sound.

With so much working against them, the cast delivered better-than-expected performances. Kyra Kennedy was a fine teenage Louise, singing sweetly and being as awkward and gawky a girl as possible. Julia Hemp as Dainty June and Serafina Fauci were equally and delightfully nauseating as June (Dainty and Baby, respectively). Rufus Collins was fine as Herbie, the man who loves Rose and helps her for as long as anyone possibly could. Alex Dorf was an almost charming Tulsa and his solo was wonderfully sung and danced, perhaps the finest three minutes in this show. The boys were good and the girls were good.

As so often happens in “Gypsy,” the three strippers in Act Two who sing “You Gotta Get a Gimmick” reasonably stole the show and provided the few light and humorous moments in this long musical. Carly Sakalove’s Mazeppa was outstanding; Emily Soell’s Electra was as much a delight as was her Miss Cratchitt earlier in the play; Sarah Cline gave Tessie Tura all of the class that character believes she possesses.

An unfortunate premise pushed onto the play by the director removes most of the fun of the show and alters the principal character into someone she truly can never be successfully. We need to hate this woman until she finally drops all pretense and reveals what lies beneath — we’ve heard her mention it but without seeing its consequences we cannot do what we want to do: love her the way her daughter does. In this production the actress has been directed to play the nice side of obsession and compulsion and there really isn’t one to play, so the result is a character who always feels artificial and unreal. She cannot change because she has nowhere to come from. This forces the show to feel insipid and not worthy of our attention and that is a shame for this is truly one of the great pieces of musical theater.

I want to love this production. I cannot do it. I want to recommend it but . . . ditto. This is the first time I have not felt that Sharon Playhouse has offered a fine piece of theater. I hope it’s the last time I feel that way in this wonderful space.

Gypsy plays through Sunday, July 3, at the Sharon Playhouse, 49 Amenia Road, Sharon, Conn. For information and tickets, see the Berkshire Edge calendar, contact the box office at (860) 364-7469, or go to online to sharonplayhouse.org.