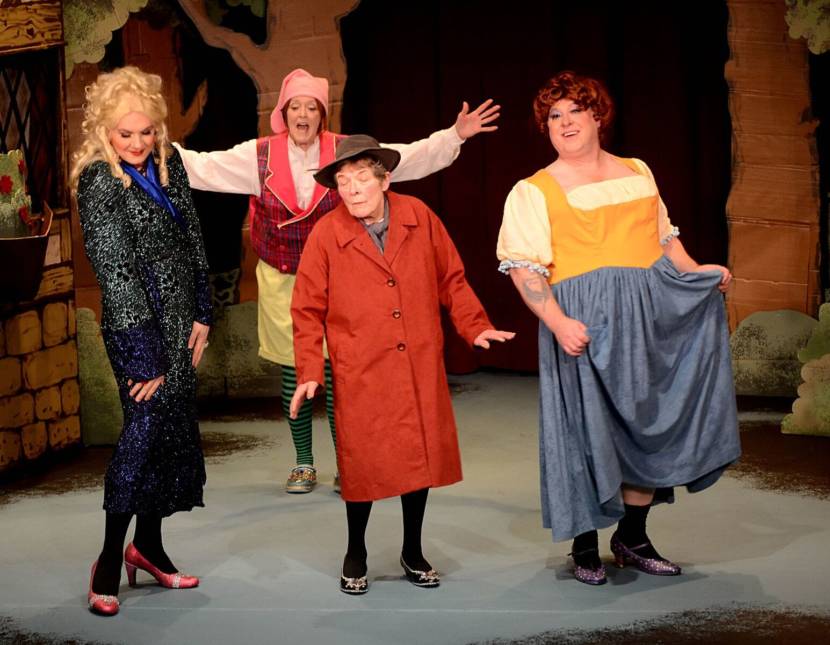 Sam Reilly, Sally McCarthy, Joanne Maurer and Monk Schane-Lydon in the Ghent Playhouse production of 'The Elves and the Shoemaker.' Photo: Cindy Smith

The Elves and the Shoemaker
By Cathy Lee-Visscher and the Pantoloons
Songs by the Pantoloons to original songs by Kander and Ebb, Bock and Harnick, Neil Sedaka, The Tokens, Leiber & Stoller, Dolly Parton, George David Weiss, Burke and Van Heusen, Lopez and Lopez, Isaac Hayes, Carl Perkins, Lionel Bart and others
Directed by Cathey Lee-Visscher

As is their tradition now at the Ghent Playhouse, their second slot is taken over by the Pantoloons and a cross-dressing fairy tale with wit, music and political barbs that takes over the space from Thanksgiving into the Christmas holiday season. This year’s panto is based on the classic tale of “The Elves and the Shoemaker,” a story in which a challenged artisan’s business is saved through the intervention of stalwart weefolk who take over the old man’s shop from midnight until dawn, make wonderful shoes and keep his business functioning through an age of crisis. How apt a choice for a baseline this story is in the age of Trump. “Make American shoes great again” should be on everyone’s lips this year as tariffs threaten to destroy American industry (even General Motors is shutting shops in the U.S.).

Sadly, the panto this time around levels fewer than usual critical comments on the government, preferring instead to throw in every conceivable shoe joke, allusion, pun, joust, riposte, shuffle, heel-and-toe and Buffalo-ho misdirection they can possibly squeeze into the one hour and 14 minute sketch.

Sam Reilly’s lovely and moveable sets work their fine wonder on the production and Joanne Maurer’s special costumes really give the show its zest and zing. Isabel Filkins’ lighting is fine but could have supplied a bit more mystery about the elves. The elves, including Uber Elf played by musical director Catherine Schane-Lydon, are a delight. Stitch the elf is played by director Cathy Lee-Visscher and Tap the elf is played by Sally McCarthy. Both play their roles well and sing up a storm.

The shoemaker is played by Emily Spateholts and his wife by Monk Schane-Lydon. Their nephew, who could inherit the flailing-for-life business, Hymie Schumacher, is played by Meaghan Rogers. Hymie is an Elvis wannabe while his Yiddish relatives are just plain humble folk who happily struggle along and pray there are no czarists waiting to evict them from their own personal Anatevka. Spateholts is grand as Aloysius, the shoemaker, and Schane-Lydon pulls out all the cleats as his lovely wife, Sophie. Rogers is a cute tough-guy who loves leather, which makes him a perfect inheritor of the last lasts.

On the evil, conniving steamroller side of the shoe industry are the Zappos, Frank and Espadrilla, played by Mark Wilson and Sam Reilly. Evil is as evil does in these pantos, and Wilson does the bad guy with perfect tongue-and-laces mean-spiritedness. As his trophy wife, Espadrilla, Reilly rolls out the bare-toed high heels and the upswept hems and provides the perfect defector, reflecting her inner honor and her less-than-mercenary Hispanola romantic charms.

Joanne Maurer rounds out the cast in three roles: a man with an opinion, the aged Gertie Wurlitzer, and country star Carl Perkins. She makes the most of the last two and pulls on her loafers and her cowboy boots with equal elan.

I look forward each year to this delectable experience and, while I could have gone home happier with some truly barbarous barbs, the show still entertained and delighted, and the audience had almost as good a time as the company. It certainly took the sting out of the early wing-tipped winter weather.

The Elves and the Shoemaker plays at the Ghent Playhouse. 6 Town Hall Place, Ghent, New York, through Sunday, Dec. 9. For information and tickets, see the Berkshire Edge calendar, call 1 (800) 838-3006 or go online to ghentplayhouse.org.