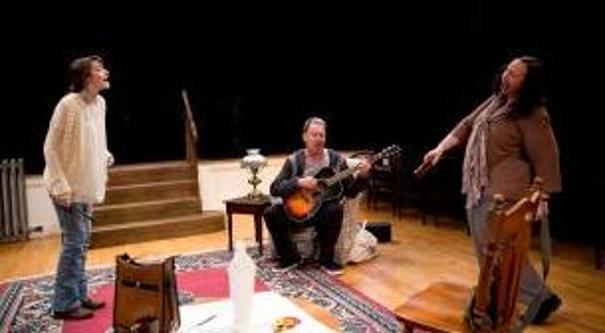 “I could pop my clot any minute.” 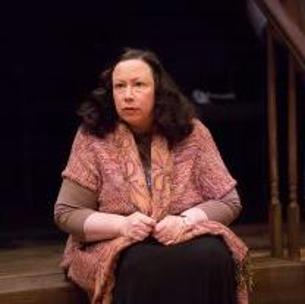 It has been a rare occurrence that a play directed by James Warwick has not pleased me. In the case of the American premiere of Folk by Tom Wells, however, true mediocrity prevails and not even the talents of this director have made the play into something it is not. This is a play about three people who do what they do because the author has so decreed, not because the needs of one inform the capabilities of another, not because the attachment of one for the others is greater than what surrounds them. The lack of real logic – of reality itself, in all honesty – is at the root of the trouble here.

An aging Irish nun, Sister Winnie, in Manchester, England, is ill, sicker than she believes or at least lets on. A man who has devoted his life to caring for his aged father likes to play the guitar and sing Irish folk songs, which he seems to do often and not at his father’s bedside. A teenage girl lobs a brick through a window and, once caught, gets away with it, even without an explanation. These are the three protagonists in the play. That the latter two spend the rest of the play in the nun’s home (where apparently she is the only resident nun, a situation which itself leaves me on pins and needles — where are the rest of them?) seems absolutely absurd to me.

I say “to me” because perhaps I am one of the only ones in the audience who doesn’t get what it is about this play that would compel anyone to produce it or direct it or act in it. I admit that I don’t get it. I know at least two others who felt the way I did about Folk at the Chester Theatre Company. All three of us tried in vain to understand what it was that caused people to want to make this show happen. 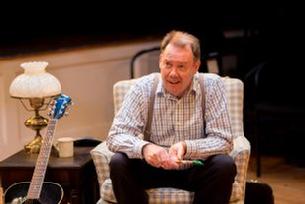 Michael Sean McGuinness plays Stephen, the man in the picture. He plays the guitar and sits and now and then sings and is now and then gruff when he is placed in a public spotlight. His singleness in the face of so many attractive women in Manchester leads to the conclusion that he is gay. This is the opinion of another character in the play and not an assumption on my part. As far as I am concerned, he is just a lonely man with only a single friend, a nun who likes her beer, her Guinness stout and her song partner, played by McGuinness. If that wordplay joke is what impels this production, it isn’t enough.

McGuinness plays Stephen with a difficult attitude to grasp. He never seems to be more than mildly interested in his friend and her problems. Stephen is eager to help her when he can, but never enough to root out the problem. His only real sense of concern occurs when she announces that she is going to Ireland to visit her sister. And even then it is the abruptness of her announcement that seems to arouse his interest in her future. This is an unformed character played by an actor who has not been able to supply the missing stages in this odd friendship that the playwright has failed to supply.

Michele Tauber’s performance as Sister Winnie is equally uninspired. Granted that she only has surface concepts to play, what she brings out is the shallow aspect of the writing. It would be difficult indeed for any actress to make this woman more interesting and appealing. Winnie is visibly ill, for the most part, only when she is alone. She is actively interested in very little except the folk music she shares with Stephen and her new interest in a girl more interested in attracting attention to herself than in being part of a friendship. In fact, Winnie is so cut off from the world around her that, if she did share her home with other nuns, they would be just as invisible to her as they certainly are to us witnessing her solitary existence, her lack of genuine anger or love. 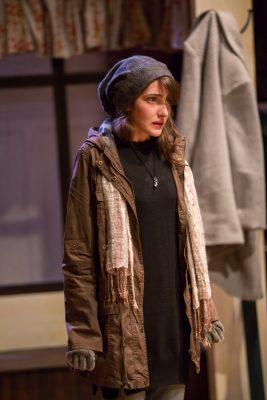 Kayleigh, the girl, is played here by Emery Henderson, who gives the only genuine performance in the play. She is also, strangely, the only non-union actor in the show. She feels rather real as she moves through the play after the first scene (in that scene she is just as out of step with reality as the other two). She sings sweetly and there is a graceful aspect to her movement. She gives her character more character than any other character in the play. There is a gentle quality in her work and this is very much appreciated in a play that, in just 90 minutes, takes us on a journey all the way from A to A-prime. Her circumstances are decently portrayed by Henderson. Her short monologue about a lost love is the most revealing sense of the history here that has some relevance to behavior or belief.

I would have to say that the problems in this work must be laid at three pairs of feet: the playwright primarily, the director secondarily and the producer most emphatically. Chester Theatre Company has delivered three fine plays this season and has ended on a very weak note theatrically. I would have to recommend that people find another direction to take in their quest for meaningful theater. This is certainly not that, although, if you want to see the future of the form, young Emery Henderson is about the best shot you have of witnessing the birth of a professional.