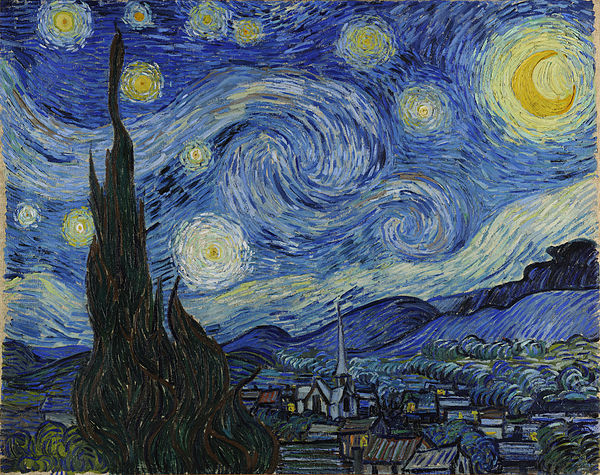 Great Barrington — Imagine that you are in the elegant Stone House ballroom of the American Institute for Economic Research (AIER) off Division Street for a performance of “Van Gogh’s Ear.” Now imagine Vincent Van Gogh himself standing in front of you, declaiming a passage from a letter to his brother, Theo. As he passionately describes his intention to go out and paint the colors of the night (“more glorious than the day’s!”) along with the piercing brilliance of its stars, you see, suddenly above him, his masterpiece, “Starry Night.”

And then, after a brief silence, a string quartet to your left starts softly the Scherzo movement of Claude Debussy’s String Quartet in G minor, Op. 10, with its startling, sparkling pizzicatos illuminating an imaginary night sky. Look at the image above and listen to this equally gorgeous performance by the Emerson Quartet:

Written by former Stockbridge resident and Tanglewood Fellow Eve Wolf and directed by Donald T. Sanders (director of Massachusetts International Festival of the Arts), “Van Gogh’s Ear” is a fully staged production based on Vincent van Gogh’s letters to his brother, Theo, and interweaves an original script that dramatizes Van Gogh with live performances of vocal and instrumental works.

Any doubts you may have had about the value of an evening of acting, musical performance and an artist’s struggle — timed to coincide with the dazzling exhibition, “Van Gogh and Nature,” at the Clark Art Institute — are instantly dispelled.

The actor, Simon Fortin, inhabits Van Gogh and his agonizing quest with sensitivity and acute awareness of his descent into, and struggle against, profound depression. The artist’s search for what colors signify and communicate includes metaphors of music, which are selected judiciously from Van Gogh’s letters to his brother (as are all of the spoken words in the presentation). Even as Van Gogh yearns to escape from isolation, self-denigration, desperate poverty, and the confinements of prison and asylum, he takes comfort in applying his hands and brushes to communicate the beauty of sensuous flowers, of dark cypress trunks and branches, of bronze leaves, and to find “an art of the future. Even if we must give up our youth for it, we must find serenity in it.” 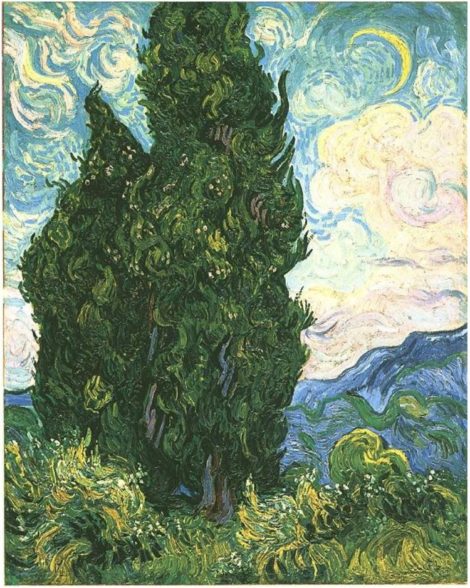 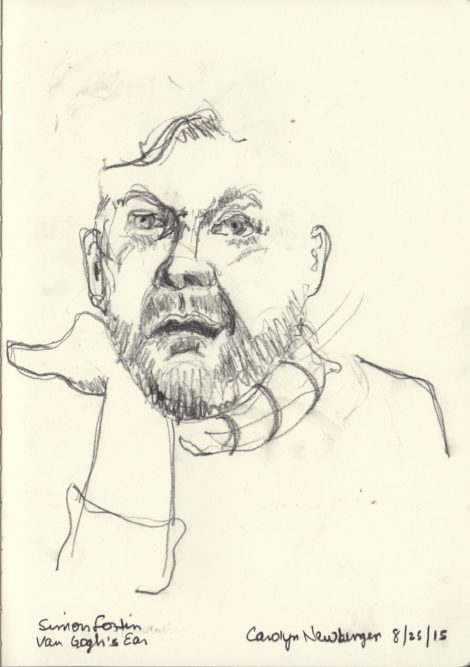 Fortin is ever alert to the deep emotions provoked by the French vocal and chamber music that frame each of his appearances, accentuating and giving new dimension both to the pastoral themes and the emotional struggles in the texts.

Chosen with impressive care, with the support of the musicologist, James Melo, the music is at once apposite, moving, thought provoking, and performed with exquisite expressivity.

At the outset, looking like an angel in the white choir robes worn by the musicians, Andrew Gonzalez performed Debussy’s Beau Soir (“Beautiful Evening”), transcribed for viola and piano, with the author of the event, artistic director, and pianist, Eve Wolf.

After the Quartet performed the aforementioned movement from Debussy’s String Quartet, the glorious tenor, Blake Friedman, performed Beau Soir with tenderness, delicacy, and a sense of emotional sympathy. 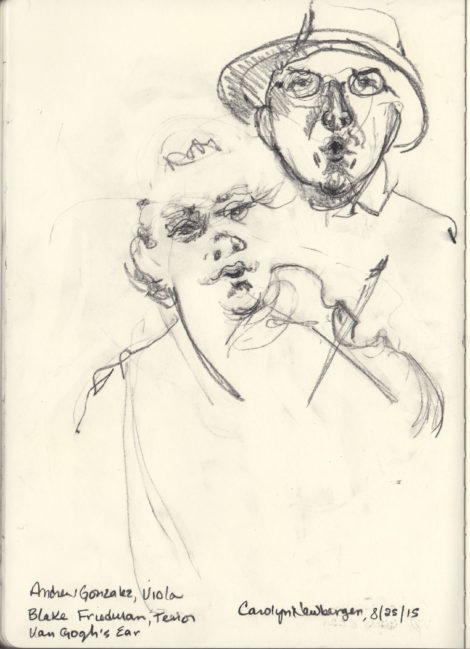 Here is the distinguished German baritone, Dietrich Fischer-Dieskau, performing Beau Soir. Although there is nothing to criticize in this magnificent performance, it is well to note that Friedman’s French diction is far more intelligible.

Music of Gabriele Faure followed. The quartet was joined by the masterful pianist, Max Barros, for the Allegro Molto movement of his piano quintet No. 2 in G minor, Op. 45. This rapid, dark, profoundly emotional piece requires empathic communication across the ensemble, and this came across movingly to the audience as well. 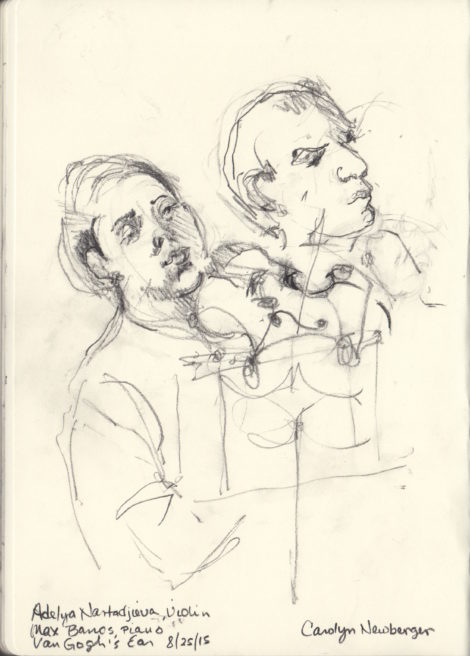 The other musically illuminating highlight of the evening, summoning not just a sense but an identification with Van Gogh’s conflicted emotions and lofty aspirations, was a performance of Faure’s song, Prison, Op. 83, No. 1, song once again, with perfect French and moving dynamic nuances by Blake Freidman, followed by the Allegro non Troppo movement of Cesar Franck’s Piano Quintet in F minor.  In the first, an inability to speak, to experience nature, to create was powerfully evoked. In the Franck, the mix of major and minor tonalities rose to a sublime appreciation of the complexity of the human emotional landscape as well, which no words, and perhaps only music and art, can sufficiently express.

Nor can your reviewer adequately characterize the satisfactions that accrued here: insights into Van Gogh the person; delight in the probing French musical masterpieces that enabled a deeper understanding of his cultural context; and a perfect complement to the many examples of artistic genius on display at the Clark until September 13, along with essential historical and biographical information, and important commentary on technique and use of color.

Here is a lively interview (to watch it click here) with Eve Wolf in which she divulges the sources of her inspired work, including Oprah Winfrey. (Fair disclosure: your reviewer has appeared on Oprah once, his artist wife, Carolyn Newberger twice, on subjects pertaining to their day gigs.) 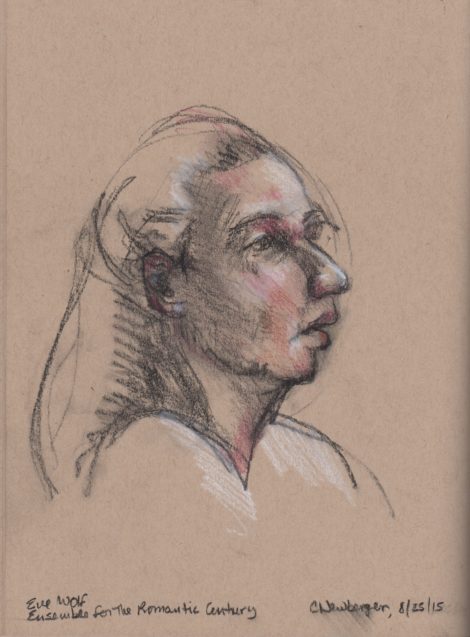 Artistic Director, Eva Wolf, and Program Director Donald Sanders, and their artistic colleagues, gave us an unforgettable performance. There is still time to see it before it closes on August 30.

At the end of the evening, the cellist, Jiyoung Lee, reprised Beau Soir evocatively. There wasn’t a dry eye in the house, your moved reviewer surmised, from his front-row seat. 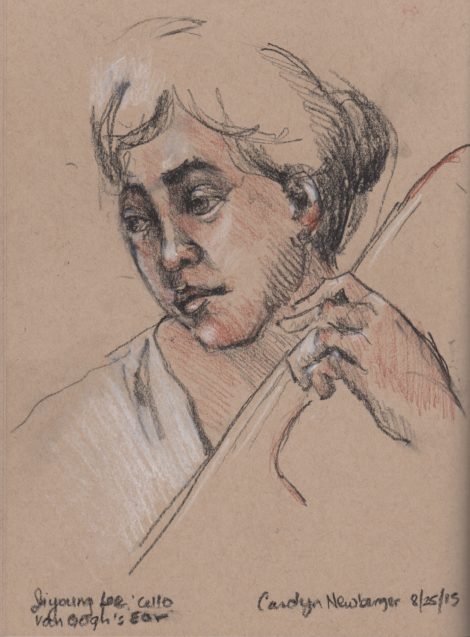 Van Gogh’s Ear runs through Sunday, August 30 and will be held in the American Institute for Economic Research’s Stone House Ballroom. Tickets are $85 (concert only) and $99 (includes admission to the “Van Gogh and Nature” exhibit at the Clark). For information and tickets, click here. Tickets can be purchased online and by calling the Clark at (413) 458-0524. Call (413) 645-3260 on the day of the show after 4 p.m. and on weekends.