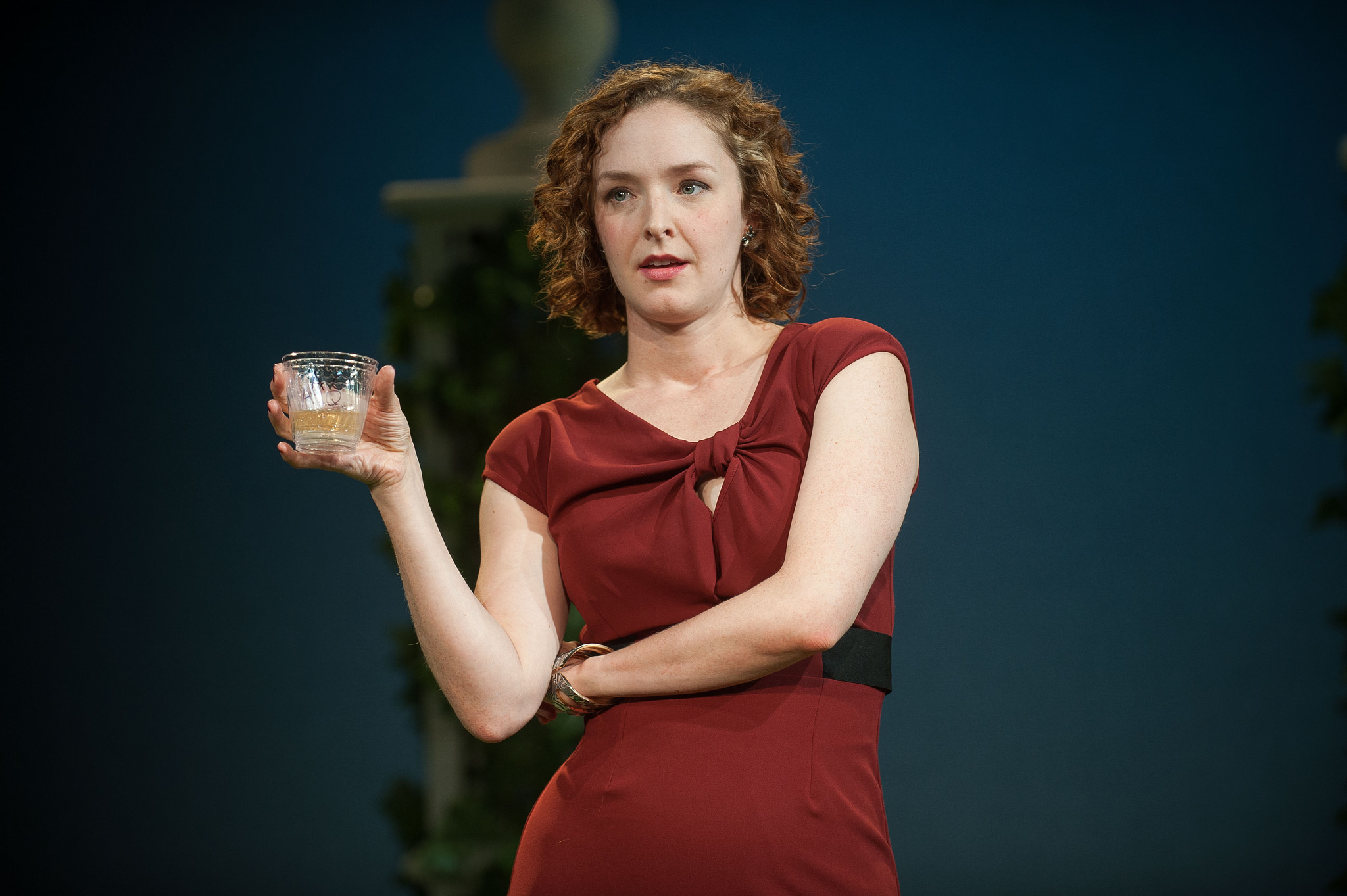 “…I could have passionate sex with a chair!”

Some classic theatrical forms appear in the one-act, 90-minute world premiere production of Lucy Teitler’s play “Engagements” which is now gracing the second stage theater at Barrington Stage Company. Classic elements abound, actually, and are inescapable. Predictable and pedestrian though many of these aspects are, the play is still intriguing enough to engage an audience for that amount of time and the author has employed humor and sexual content to keep that engagement going. What she has ended up with, in this case, is a very intriguing first act of a longer play that she may never write. That would be a pity for the principal characters in this play are interesting and they deserve the chance to explain themselves and to suffer the consequences of their actions.

Lauren and Allison are best friends. Lauren cannot abide Allison’s boyfriend Mark. She is verbally abusive about him and to his face. Lauren cannot keep a boyfriend of her own. When unremembered houseguests arrive at Lauren’s Cambridge apartment she is abusive to them but lets them stay and when her personal troubles begin to accelerate, she begins to rely on the aid and assistance of one of them, a boy named Ryan. Depending upon how you view this play the plot may concern any of these folks, but Ryan emerges late in the game as the one most likely to step into the limelight in that fugitive second act.

It is a classic vamp tale. An engaging woman enthralls men, and a few women, ensnares them in her sticky web, abuses them and releases them somewhat unhinged by their experiences with her. She is the spider, spinning and singing and mesmerizing her partners. It is a tale told to the audience by the participants who are also playing their scenes together live before us. The mixing of techniques and the combining of imagery is very much in line with new plays being presented by at least two other theaters in the region this summer. It’s a technique I don’t really like but am quickly becoming accustomed to in spite of my modest protestations. Perhaps this is the new form, the more modern theatrical format. If so, all I can say is that it is nothing new, except that the tales told are spoken at us and not sung. While “I could have danced all night” in some aspects of this show, I am concerned much more with whether “to be or not to be” is at the essence of the thing.

Amanda Quaid as Lauren is quixotic and odd and constantly changing her mood, her stance, her attitude. Her voice shades differently from line to line. She is engaging and startlingly fascinating. Standing still she is riveting. Moving around the stage she is compelling. With the exception of her final costume her dresses, designed by Beth Goldenberg, don’t fit her correctly so as she travels the space her skirts collect in places, like her hips and her midriff and her upper leg, forcing our attention to her body. Her bodice is always draped and a bit loose giving the impression of breasts that cannot be easily contained. If clothes do indeed make the man, then Lauren’s clothing is her calling card, recognizable from across a crowded party space.

Quaid moves seductively in the most natural fashion. There is nothing covert in her performance. A child would notice her deliberate seductiveness and yet there is a peculiar subtlety to it all. She has a very brief lesbian moment that passes as it startles; she possesses men with an intensity that should set them on fire. She plays her game of deception and self-deception with finesse and flair. Quaid’s voicing of all this is superb and she never misses an opportunity to open her character up to her fellow characters or to us. In her speeches to the audience she includes us in the periphery of her web, for Lauren likes an audience, likes an audience a lot even though she wants discretion to protect her from the world around her.

The man at home is Ryan, her cousin’s boyfriend, played by Adam Gerber. Adam takes an instant dislike to his hostess but while her intellectual interests disgust him, her human instincts begin to intrigue him. She is a scholar of Victorian fiction, an avid Anthony Trollope enthusiast who is, herself, a trollop, defined as a “vulgar or disreputable woman, one who engages in sex promiscuously.” Ryan sees this but also senses her vulnerability and when he believes her to be the subject of a stalker, he takes on his own Victorian semblance, a quasi Sherlock Holmes attitude which ultimately gets him caught in Lauren’s seductive web. Gerber makes his transitions beautifully and we feel his pain, with humor, as he attempts to extricate Lauren from the web he doesn’t realize she is weaving.

As his girlfriend, Lauren’s cousin Catherine, Phoebe Strole has the hardest role to play. Her innocence is in stark contrast to Quaid’s worldliness. She is never cloying, never too sweet, but she maintains her ingenuousness throughout the play, right up to the final scene where she starts to spin a web of her own design, something she does with youthful enthusiasm and a sweetly comic manner. Strole’s Catherine is a delectable contrast to the darkness of Lauren and also to the outright lunacy of Lauren’s best friend Allison as played by Kate Loprest.

Loprest delivers a solid performance as the eastern “deb” most likely to catch the perfect fella. She plays the near-manic personality to perfection, constantly waving, winking, chatting with an off-stage personality, enticing waiters, compelling friends and almost with a dizzying fortitude, hastening hither and thither and yonder with the social grace of a youthful Grace Kelly. Her constant patter of gossip and emotional confidence is adorable, particularly in the context of this play where she is almost a victim, but emerges a star in her own little world. Boston society can rest easily with its visual and oral reputation in Loprest’s performance as one its finest human examples.

Her boyfriend, Mark, is played by Robert David Grant. If there is anything truly charming in the angry, dependent lecher, Grant manages to bring it onto the stage. Mark needs his woman, whoever it may be. Allison brings him a high degree of respectability; Lauren provides him with the animal outlet he so keenly requires. As the play progress, moving from one engagement party to another, Mark becomes more and more difficult to handle and equally difficult to like. Grant’s good looks and easy flowing manners make him a perfect choice to play this part. No matter how far he takes his very human obsessions we keep trying to like him for the best parts of his character. We are witness to his humiliations and we sympathize. We watch his seductions and we are amused and horrified. Mark’s movements turn us into voyeurs and it is painful to be put into that position, but Grant’s work is too compelling to turn away from when his Mark falls victim to the spider in the web.

Director Louisa Proske keeps our attention riveted to the stage. She has handled her actors well and she knows exactly where they should be, what they should be doing and how to keep our attention. She has not allowed the set, beautifully designed by Brian Prather, to be distracting. She has gotten wonderful costumes from Beth Goldenberg that truly define each of the characters without any sort of exaggeration to them. Her lighting designer, Yi Zhao, has done beautiful work in the small black box theater including some strange but superbly fitting special effects. Kenneth Goodwin has created the sounds of off-stage parties perfectly, keeping them at levels that give us their presence but never distract us or keep us from hearing relevant lines spoken in conversation or in audience confrontation.

Plays about nymphomania are not necessarily what everyone wants. Driving home from the opening I was aware of the “silver slipper of the moon” in the western sky and it made me think of Blanche DuBois in Tennessee Williams’ play “A Streetcar Named Desire.” It seemed fitting to have that moon so beautiful and obvious on opening night of “Engagements” for Lauren and Blanche have a lot in common. I love Blanche, at arms distance of course, and Lauren could become as essential to know as Blanche has been. I hope that one day I will see a second act, or a second play, with Lauren living with the world she continues to create. Until then, I must content myself with this play as it is. I urge you to do the same.

Engagements plays through August 30 on the St. Germain Stage at Barrington Stage Company’s Sydelle and Lee Blatt Performing Arts Center, located at 36 Linden Street, Pittsfield, MA. For tickets and information, click on the Berkshire Edge Calendar, call the box office at 413-236-8888 or go on line at www.barringtonstageco.org.