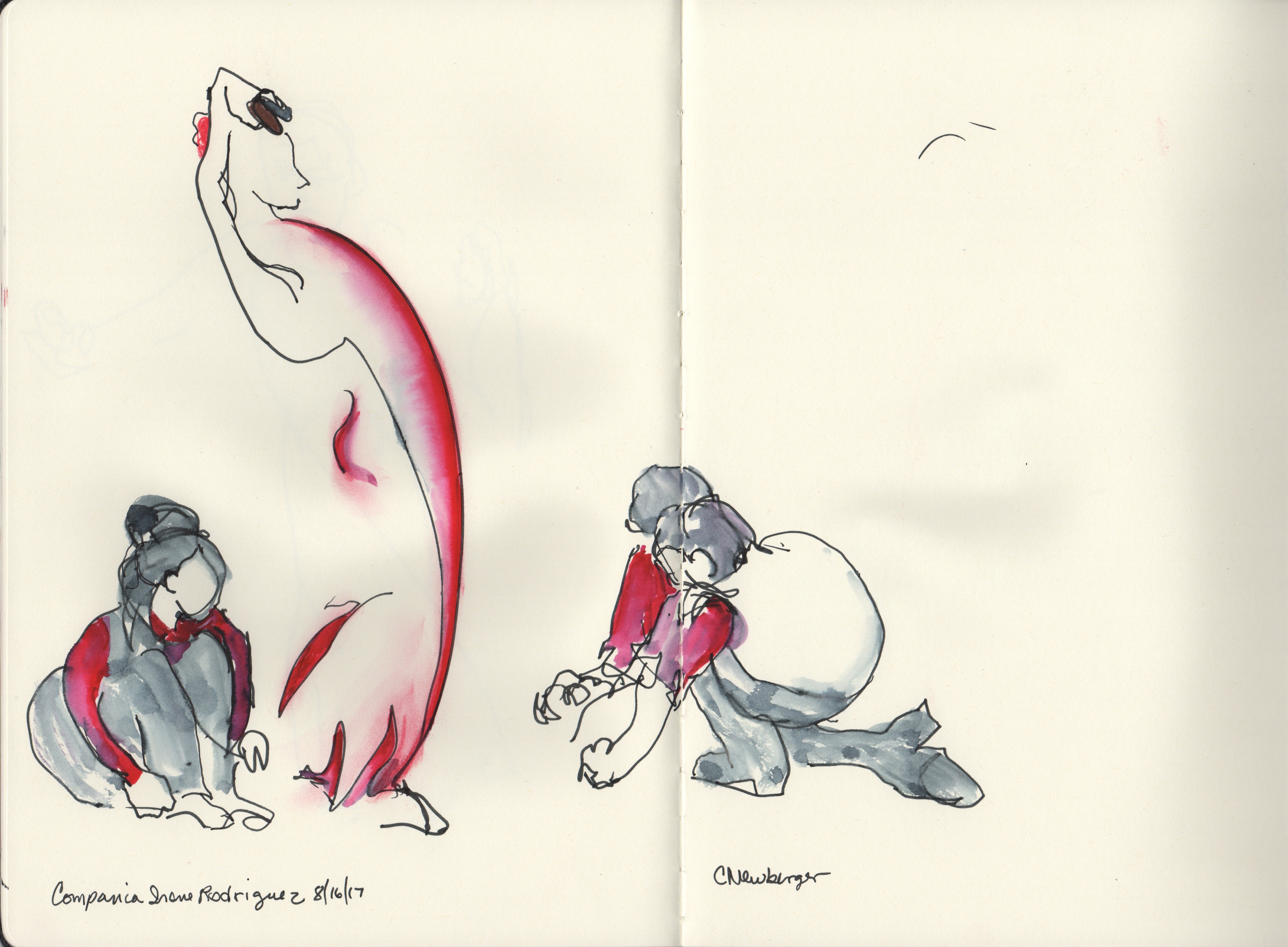 Ms. Rodriguez began studying ballet as a child at the Andalusian Cultural Center in Havana, where classical dance instruction was available to children across the socio-economic spectrum. According to Jacob’s Pillow dance scholar Brian Schaeffer, little Irene would wander down the hall and fell in love with the Spanish dance classes. At age 16 Ms. Rodríguez joined the Corps de Ballet of the Spanish Ballet of Cuba, became a prima ballerina, and five years ago founded her own eponymous company.

In the week after hideous demonstration of white supremacy and the tragic deaths in Charlottesville, Virginia, “More Than Flamenco” took on a deeper meaning for these reviewers. The title suggests not only a revitalization of the Andalusian dancing of Cuba’s colonizers, but also the importance of its integration into modern Cuban culture with its African and indigenous roots, all moving into a modern world with complexity and diversity.

When we think of Flamenco, we imagine percussive footwork, arched backs, castanets, raised ruffled red skirts, men with intricate feet and manly posture, all driven by throaty male cantare, staccato clapping, and passionate improvised guitar. All that was there in that performance, and more.

The choreography, theatricality, and themes of the ten dances that comprised this program moved the audience beyond preconceptions about Flamenco, and into a place of exploration, creative expression, and evolution.

A spellbinding array of musical effects complemented the dancers’ own percussive impulses (hand claps, body slaps, toe- and heel-taps and scrapes, and a stunning array of rhythms from their castanets).

Each instrumentalist was in full command and in synch with his colleagues, both within the drum section on the left and the guitars and sax on the right. The soundscapes were supple, swinging, nuanced, and acutely sensitive to the gestures and sounds of the dances.

Most impressive were the Flamenco- and contemporary jazz-inflected stylings of guitarist Noel Gutierrez. He added –with his own fingers –unexpected flights of percussion to his passionate strumming and single-note improvisations, from sharply picked accents near the bridge, fingernails pulling on strings of the neck, even as he pressed out the harmonies, and thumb and finger strikes to the body of the instrument.

Echoes of John Coltrane and Sonny Rollins sprung from extraordinary tenor saxophone of Rolando Benitez, whose nuanced readings of the band arrangements were supplemented by brief but eloquent improvisations. One left the performance wanting to hear more of this extraordinary talent.

The program began in a pitch-black auditorium. The curtain slowly rose to reveal feet, then knees, and then…the curtain stopped. The feet, one pair in white shoes, four pairs in black, dazzled in the illuminated space beneath the black curtain, creating with their accelerating Flamenco rhythms their own language and meaning, kaleidoscopicly separating and reuniting, sometimes even pedaling and undulating above the floor, defying gravity, ending with the white shoes falling empty to the floor as the curtain came down. Deracinated from their bodies, the feet in this United States premier of El Mito (The Myth) forced us to see them in a new way.

This sense of creative theatricality continued throughout the program, expressed in dramatic lighting by Fernando Alonso, and supported by the superb flamenco and jazz arrangements by guitarist Noel Gutiérrez, joined by musicians Rolando Benítez, José Daniel Bermúdez, Josué Rondón, and Daniel Sánchez.

Dramatic highlights of the performance included:

For more highlights, click on the Jacob’s Pillow link here:

Compañía Irene Rodríguez is a thrilling, daring, exacting company and a worthy addition to director Pamela Tatge’s many introductions to lesser-known companies from many cultures and places. Through the vehicle of dance, Jacob’s Pillow is expanding our understanding of peoples, cultures, perspectives and dance itself, and leading us to ask deeper questions about our own beliefs and preconceptions.