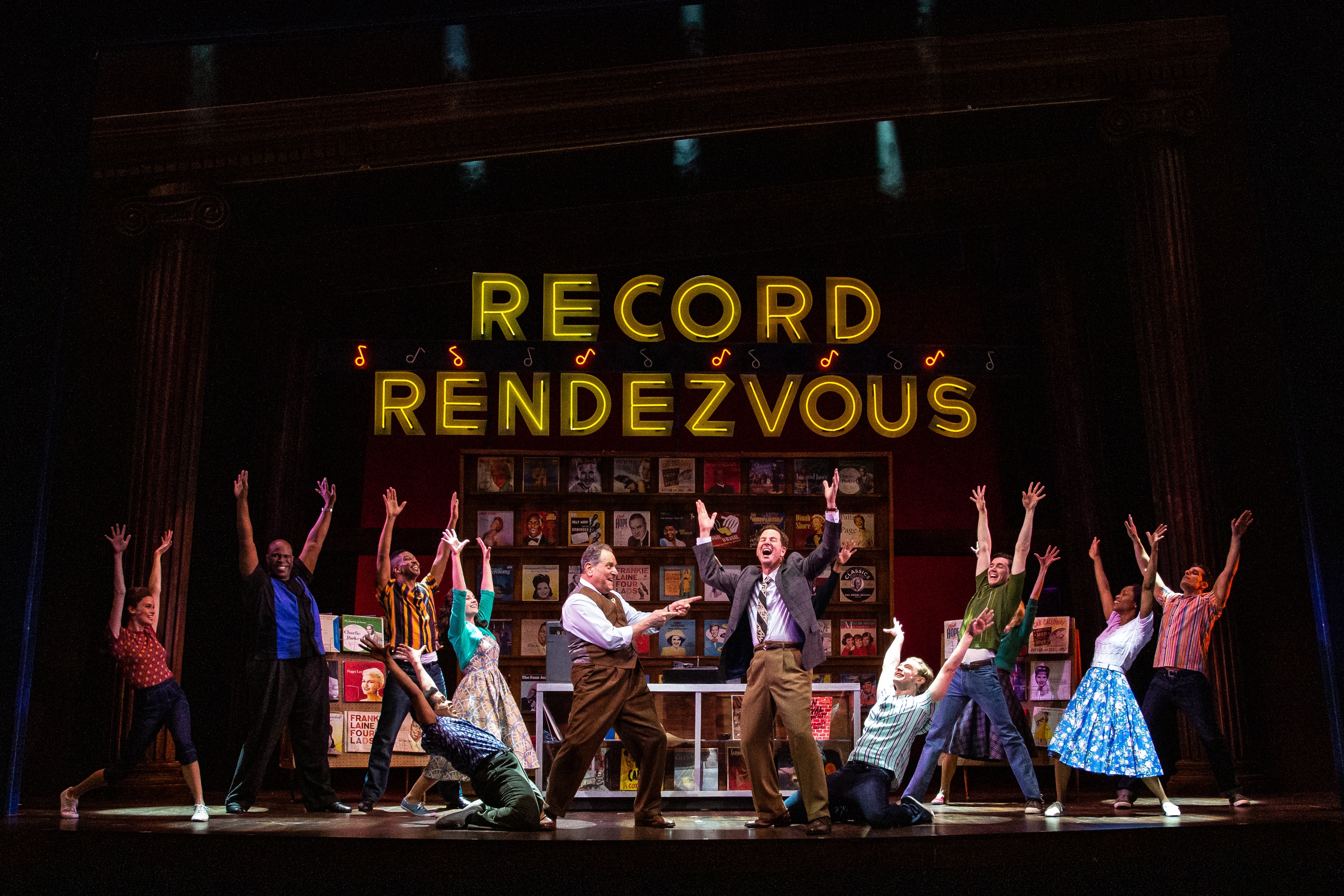 Which is more apt to say about “Rock and Roll Man: The Alan Freed Story”—that it’s a musical that doesn’t know what kind of musical it is, or that it’s a work in progress? Well, both. The all-over-the-place book, credited to a trio of writers, begins with an engaging premise. Freed (Alan Campbell), the groundbreaking DJ and record promoter regarded as the “father of rock n’ roll,” disgraced by a federal payola trial, flashes back to his career and personal life, which occurs in the court of public opinion, a fantasy trial in which he’s defended by Little Richard (Richard Crandle) and prosecuted by J. Edgar Hoover (George Wendt). With more creative and focused writers, the scenario has all kinds of imaginative possibilities, but the construct gets subsumed to a mélange of bio-musical, family melodrama, backstage showbiz story, jukebox musical and musical revue formats.

The music score doesn’t help. The good news is that the show is chock-a-block-full of over two dozen instantly recognizable rock ‘n’ roll classics from the ‘50s and early ‘60s. The bad news is that there are about 10 instantly forgettable original songs that weigh the show down. The only signs of life in the show—the rock ‘n’ roll hits of Chuck Berry, Little Richard, Danny and the Juniors, Buddy Holly, Jerry Lee Lewis, LaVern Baker and more—are performed by a wonderfully talented ensemble. But these hand-clapping numbers, many of which never get fully played out, are inserted without much context, so it’s like watching a greatest hits revue or highlights from one of those PBS documentaries on a decade of pop music.

The most unexpected and least known of the Black R&B numbers, is “Sixty Minute Man,” described as “raunchy” (today as “naughty,” perhaps), about the staying sexual power of a Black stud. Hover’s and Little Richard’s arguments in court introduce modern references to today’s culture wars; properly, the script makes plain it was racism that blocked Black R&B artists, the progenitors of rock ‘n’ roll, onto radio stations that wouldn’t play “Negro” or “jungle music.” Freed broke that barrier. And credit “Rock and Roll Man” for acknowledging, too, how, once the barrier was broken, white artists then appropriated Black songs as their own. There’s an all-too-brief scene in which Little Richard mockingly derides Pat Boone for his white-bread cover of “Ain’t That a Shame.” (The phenomenon was brilliantly musicalized in the “Cadillaxc Car” sequence in the original “Dreamgirls.”)

The most engaging character in the show is Little Richard; an immensely talented Richard Crandle appears to be really having fun with his part. (I suspect he could have ripped the part wide-open if the show had more confident direction.) The guys who form the quartet for all the Black R&B singing groups are terrific, as is powerhouse Valisia Lekae (Broadway credits include “Motown: The Musical” and “The Book of Mormon”) as LaVern Baker. Newcomer James Scheider has a knockout turn at the piano as a Jerry Lee Lewis performing “Great Balls of Fire.”

Alan Campbell, who played Joe Gillis to Glenn Close’s Norma Desmond in “Sunset Boulevard,” does some heavy lifting with the script to make Freed’s character work for two and half hours. George Wendt, who will always be known as Norm on “Cheers,” is burdened with the worst of the original songs: “King of Payola”. Both actors built careers around far superior material than “Rock and Roll Man.”

Rock and Roll Man: The Alan Freed Story will blow you away at Berkshire Theatre Group’s Colonial Theater, 111 South St., Pittsfield, Massachusetts, through Sunday, July 21. For information and tickets, see the Berkshire Edge calendar, call the box office at (413) 997-4444 or go to berkshiretheatregroup.org.