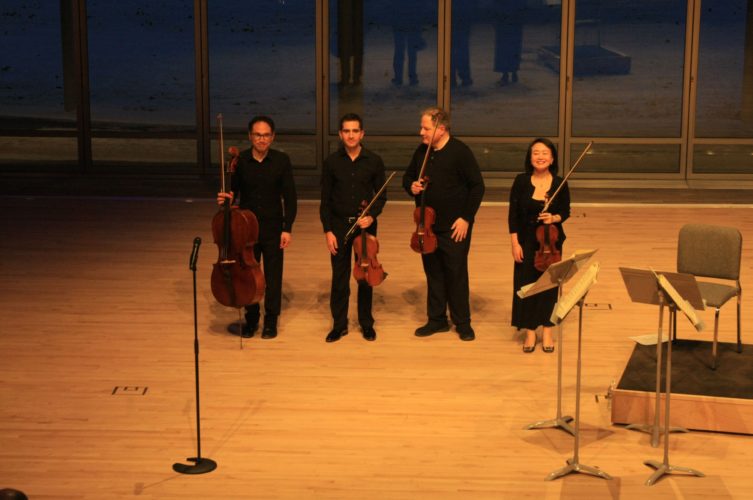 Lenox — When you attend a Tanglewood Learning Institute concert during the month of December, you run the risk of encountering a few flakes of snow en route to the venue. But if you are a performing musician walking into the Linde Center’s Studio E for the first time, you run an entirely different sort of risk — the risk of performing under par in an acoustical environment unfamiliar to you. In a perfect world, you would have spent a few days helping the Center’s acoustical engineers make their final tweaks to the room’s array of high-tech sound manipulation gizmos. You would know the room’s acoustical properties well, and you would use that knowledge to position yourself in exactly the right spot for delivering performances of the highest possible excellence. In a perfect world, you would be none other than violinist and erstwhile acoustical engineering consultant Victor Romanul, who, along with violinist Xin Ding, violist Daniel Getz, and cellist Adam Esbensen, performed a program of Kodály and Beethoven in Studio E at Tanglewood’s Linde Center on Sunday, Dec. 1.

First on Sunday’s program, Hungarian folk-song collector Zoltan Kodály’s “Duo for violin and cello,” Opus 7, is a three-movement work of extraordinary breadth and variety of character. It comes across as a kind of rambling exploration of Kodály’s homeland and is reminiscent at times of Béla Bartók’s work. Full of unexpected twists and turns, the piece is extraordinarily difficult to perform. (If the players say otherwise, just smile and nod.) Hitting all the right notes is a manageable task for musicians such as these, but maintaining tight ensemble throughout is something else altogether. Their performance wasn’t perfect, but what Victor Romanul and Adam Esbensen achieved on this piece shouldn’t even be possible without a conductor.

Beethoven’s fraught and emotionally ambiguous String Quartet No. 10 filled out the concert’s second half. The group’s performance of this piece was so finessed and unified, you’d have thought they were playing from memory — vivid, urgent, unforgettable.

It seemed obvious on Sunday that these musicians had performed both the Kodály and Beethoven pieces many times together. But, in fact, they had not. Apart from rehearsals, it was their first time performing this material as a group, but that was enough to achieve complete mastery over it. So it goes within the ranks of the Boston Symphony Orchestra. It’s always a fascinating and deeply rewarding experience to see this level of musicianship up close.